It features two men who use powerful hands to come up with knock-out results but, it is not a fist fight.

Opened last Tuesday, November 16 and will run until the end of this month, Mano mano is a two-man exhibit that brings together two of Manila’s exciting contemporary visual artists, Raoul Ignacio “Iggy” Rodriguez and Michael Alvin “Mike” R. Adrao.

Rodriguez was one of the recipients of the Thirteen Artists Awards in 2009, an award given by the Cultural Center of the Philippines to young and emerging artists based on their bodies of work. On the other hand, Adrao finished residencies at NEAR Dangsang in Seoul, Korea in 2009 and Project Space Pilipinas in 2008.

The show at the Blanc Compound in Mandaluyong features 20 drawings from Rodriguez and Adrao, both popular in this particular field in the visual arts.

Like in every artwork, form and substance must come together as one, not one after the other. And that is one certain thing that Rodriguez and Adrao accomplished in Mano Mano. Definitely, it is not an exaggeration to say that these two are masters of drawing. 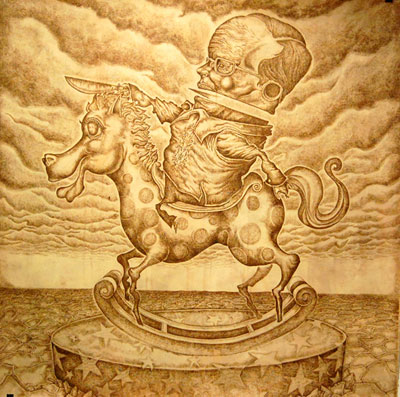 Delusions of Grandeur. The status quo is maintained by those who ride in toy rocking horses.(Photo by Terence Krishna V. Lopez / bulatlat.com)

For those who follow the works of Rodriguez, it is without question that his are always done with high taste and are well thought-off, with hues and strokes and texture and details always falling in proper places.

But beyond his works’ form is the substance one always gets from them.

Rodriguez once again presents here his own critique of the status quo with his seven-piece acrylic and pen and ink on arches, with coming of age in the center- a tableau with a queen with three dog-monster-pets and a boy carrying a flag who is easily, current President Benigno S. Aquino III. The image is carnivalesque and right away you are transported in that place, well, in the carnival.

But then, you look again and yes, the drawing looks more serious and you realize, that’s Rodriguez and yes, it is his interpretation of the current Philippine political system. But yes, we can each have our own interpretation for that matter.

Another scene-stealing drawing by Rodriguez is delusions of grandeur which when viewed after coming of age concretizes the theory that Rodriguez’ part of the show is to tell us that, quite likely, because his images cannot be erased easily even after stepping out of the gallery, the status quo is maintained by the powers that be who all treat it like a show. 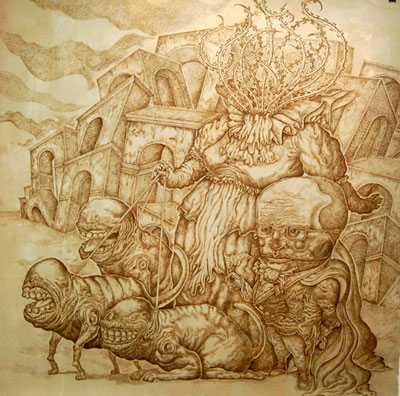 Coming of Age. With this piece, Rodriguez sets the tone of his side of the show. (Photo by Terence Krishna V. Lopez / bulatlat.com)

Delusions of grandeur shows Aquino (you may look at him and say it’s not him, if you please) on a rocking horse toy, that looks like that on a merry go- round, holding a bolo. Again, we may interpret it the way we want to but quite certainly, Rodriguez here wants to call a spade a spade- we are led by a man on a rocking horse. A horse toy at that.

His other pieces rhetorics of peace, hangganan and sa kaibuturan ng pag-unlad on the other hand, can be viewed as his interpretation of development while toxin and bukas palad gives off the artists rendition of the mind and the heart, in the social context, of course.

Again, if one follows Rodriguez, it is quite important to note that some of these images have been present in his previous works or at least similar images. However it does not hinder his once again successful efforts to shows that he is very much in deep immersion with the realities he is presenting or criticizing, albeit in distorted figures in some.

Rise/fall of the machines

For his part, Adrao stages a show that is spectacular with his 13-piece drawings that convey his own view of the society or humanity in general.

Adrao’s hands are definitely powerful, to say the least, upon looking at his works. His obvious skills are in place, evident in the very delicate and intricate details and in the clarity of his imagery, devoid of vagueness.

But Adrao’s intention here is clearly not to make a spectacular out of his magnificent and almost otherworldly interpretation of the perennial war between man and machines. He draws in the audience closer to the artworks after enjoying them as a whole, framed series.

His drawings are divided into two: mekanismo and demakina, and for some reason, they remind me of the Christian Bale starrer, the machinist. Perhaps because like Bale’s character, Adrao’s drawings show the contrasts between man and machines at one level while blurring the lines that differentiates the former to the latter at the same time. The reminder ends there, of course. 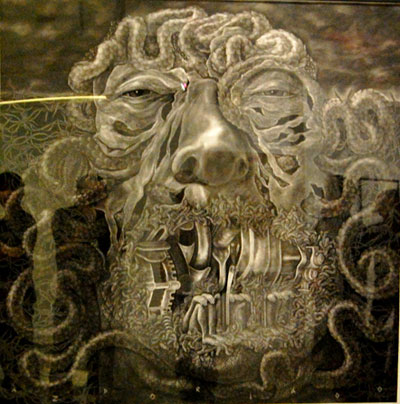 The three-piece series mekanismo, which are all 4ft x 4ft charcoal instantly catch anybody’s attention even as they are hanged in different walls of the gallery. Each different from the other and yet, like Rodriguez’s can be viewed like an ensemble. Perhaps because he used same elements that make the characters similar at the same time- I mean, wo/man and the machine, wo/man vs. the machine.

In Mekanismo 1, the visible images intertwined are decaying bodies of humans, a snake dissecting/separating these bodies, as if in a carefully placed/choreographed tableau. And then you look closer and maggots, in all their glory feast on the body. And there are the barbwires surrounding the bodies, with the also decomposing face of the top figure on an oxygen mask. 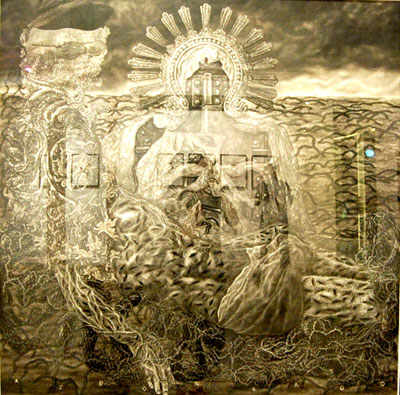 Mekanismo 3. Adrao a la Pieta is a scene-stealer too. (Photo by Terence Krishna V. Lopez/ bulatlat.com)

Mekanismo 3 is a clear rendition of Adrao of the eternal image La Pieta, in charcoal while Mekanismo 2 shows a machine of a human face, a snake entering and exiting in anyway it wants to and then the mouth stitched in worms yet opened-wide, with details of human legs, feet, hands and other things wonderfully and meticulously drawn in small figures.

For example, Demakina 8 and 9 can be seen by positivists as romantic as a marriage, partnership or an inevitable link between humanity and machines, albeit in decay or decompose. On the other hand, it is not impossible that it can be seen as tragic- like no matter how one escapes the other, they will always be together.

And yet again, all these words are not enough to describe how these two artists exude their own grace and mastery in this field of visual art but hopefully, enough to convey the message that although this is not a fist fight, it is a must-see and definitely deserves a full house. (Bulatlat.com)