You Are Here: Home → 2010 → November → 27 → From Two Who Suffered, a Call to Repatriate Other Distressed OFWs Before Christmas

From Two Who Suffered, a Call to Repatriate Other Distressed OFWs Before Christmas

MANILA — Until recently, Melith Ante and Rashida Jaman were overseas Filipino workers. Like many OFWs, however, they suffered abuses in the hands of their employers and recruiters and so they were forced to head back home, leaving behind compatriots who undergo maltreatment by authorities while in detention or in halfway houses.

Since their recent repatriation from their respective host countries, Ante, 28, and Jaman, 29, have joined Migrante International, an overseas Filipino workers group, in calling for the immediate repatriation of stranded and jailed Filipinos abroad. The two cited the dire conditions of these OFWs, many of them suffering from all sorts of abuses and neglect.

“The government should immediately assist them (stranded and jailed OFW),” Ante, 28, told Bulatlat.com. “They are already starting to lose hope.”

Ante left to work in Jordan on July 7, 2010, believing that she would work as a janitor with a monthly salary of $400. Upon arriving in her host country, however, she was told that she would have to work as a domestic helper instead. Her salary was downgraded to $100 and would not be receiving it for the first three months as payment for her “deployment cost.”

“I was willing to stay for as long as my employer would treat me well,” Ante said, adding that she badly needed money to send her younger sibling to school and to pay for the hospitalization of her mother, who just had a stroke. However, she noticed how her male employer would peep into the restroom every time she took a bath.

Then, on Sept. 18, her employer tried to rape her. “I managed to escape at around 9 p.m. when the couple (her employers) were fighting about what happened,” Ante said. She stayed with a friend for five days before asking the help of the Philippine Embassy in Jordan. 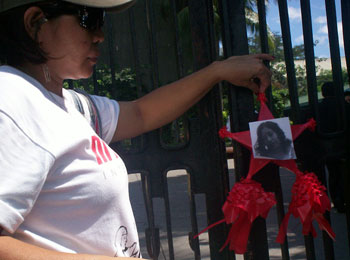 A member of Migrante International calls for repatriation of distressed OFWs before Christmas. (Photo by Janess Ann Ellao / bulatlat.com)

Ante stayed in a shelter provided by the Philippine Overseas Labor Office – Overseas Workers Welfare Administration in Jordan. This is where, Ante said, she witnessed and experienced for herself the struggles that undocumented migrant workers are going through.

The case officer handling Ante did not even bother to ask her what happened. “They just looked at my papers, stamped something on it and started looking into my things.” She said that they searched all her belongings “from underwear to cellphone” and made a list of it. “It felt like we were being sent to prison for stealing,” Ante said.

The food, on the other, that was being provided to the stranded OFWs were like, as Ante described it, “kaning baboy,” or food fit for a pig. “If only we were not hungry, we would not bother to touch it at all. But we were hungry and had no choice.”

Another OFW, who they fondly call Nanay (mother) Thelma, was said to be occasionally possessed by evil spirits. But Ante thinks that she became mentally unstable because of what she went through emotionally and physically. Just before Ante was repatriated, she heard that Nanay Thelma found another employer.

Noren, a 14-year-old from Maguindanao, has been staying in the shelter for almost three months at the time that Ante was still living there. Noren’s employer, who was a doctor, sent her to the hospital after she was seen bleeding from a small cut in her finger. “When she woke up, her right pointer finger was missing, cut off from her hands.”

“Her employer came looking for her in the shelter. POLO officers were supposed to hand her over but OFWs defended her and she was able to stay,” Ante said.

There were also Filipino women who were very sick but are not yet repatriated. A certain Joy was, at that time, quarantined for tuberculosis and a 17-year-old Lulu who has been diagnosed with goiter.