Maricel Delen: A Human Rights Worker, a Widow, Now a Victim of Persecution

MANILA – Her presence of mind and a tip from a sympathetic journalist enabled Maricel Delen, 34, a staff member of Karapatan-Camarines Norte to elude arrest last November 22.

That day, at around 10:30 a.m., combined elements of the Daet Police and the 9th Infantry Division, 902nd Brigade of the Philippine Army raided the Karapatan regional office at F Pimentel Ave., Pasig, Brgy.II, Daet, Camarines Norte.

Four were arrested. They are Esmeraldo Bardon, chairman of the provincial chapter of Kilusang Magbubukid ng Pilipinas (KMP),Denver Bacolod, a staff member of Karapatan, Mherlo Bermas, a member of Kabataan Party and Elpidio de Luna, a former political prisoner who was released just this October. Three are detained at the Daet Philippine National Police headquarters while Bardon is detained at the Camarines Norte provincial jail. Bardon was charged with murder, inciting to sedition, illegal possession of firearms and explosives and subversion.

Delen’s name is on the search warrant. The soldiers said they were looking for members of the New People’s Army (NPA) but Delen is not a guerilla. She is the wife of Jayson Delen, a Bayan Muna secretary general in Camarines Norte who was killed on April 27, 2006. Her quest for justice for the death of her husband made her join Karapatan.

Delen told Bulatlat that the four activists who were arrested actually dropped by their office. She said Bacolod was only resting at their office because of a headache and his foot was swollen. De Luna went to their office to get his medicines for tuberculosis.

Delen accompanied her daughter to her field trip the day before the raid and decided to sleep over at their office because it was too late to go home. The next morning, Nov. 22, Delen and JC left the office at about 7:00 a.m. Delen waited for JC’s class to finish. She said it is very seldom that she accompanies her daughter to school. After JC’s class, she took her to the house of her in-laws where they live. 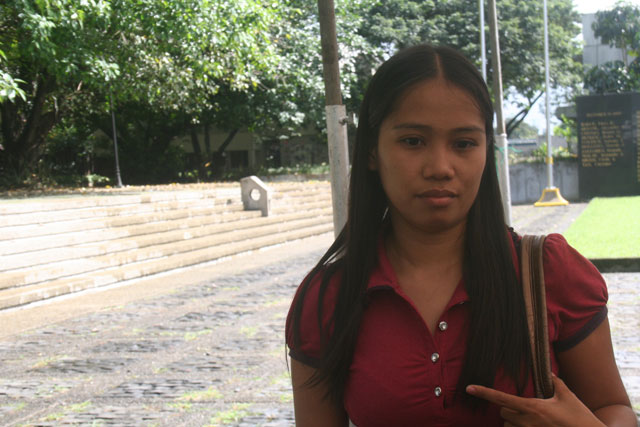 After buying some supplies at the market, Delen arrived at their office at around 11 a.m. “I was on the other side of the street, I saw members of the media, policemen and soldiers in full battle gear. The soldiers said they were looking for NPA guerrillas.” She tried to assert that there is no NPA guerrilla in their office. A journalist whispered to her that she should escape because her name is in the search warrant.

“A soldier asked me why I was there; I pretended that I would just deliver some coffee and that I was working at the carinderia (food stall) in front of the office. He asked me who the owner of the carinderia is and I told him that it is owned by my cousin and then he let me go,” Delen recalled.

After that she immediately went to a lawyer and then to a friend who is the municipal administrator at the Daet municipal hall. “I stayed with my friend for a day and then on Nov. 24, Wednesday, before dawn, my friend accompanied me to the terminal where I rode a bus going to Manila.”

It was all abrupt; she did not bring any baggage and did not even bid her daughter goodbye.

After the killing of her husband, Delen was told by her parents to stop her activism. She used to be with Gabriela.“They said that I should stop because someone already died from the family. They were also concerned about JC.” Her in-laws agreed with her parents and even advised her to transfer to Legaspi City, two hours away from Naga. “I told them my work is in Naga,” she said.

“After Jayson was killed, we were being harassed by the military. My in-laws are terrified because we are under surveillance by the military,” said Delen crying. She said the killing of her husband has traumatized her and her in-laws. But despite the trauma and concerns about her security, Delen decided to stay in Naga and continue her work with Karapatan.

Delen said it pains her to leave her daughter. “I called her two days after I arrived in Manila and she wanted me to go home. I told her I could not because it is already late and to just wait for the toy that I would send her.” She has not called again since. “I know she would again ask me to go home. I resist the temptation to call her again,” said Delen in tears.

Nobody in her family knows her whereabouts, except for her older brother. “I talked to him before I left for Manila. I told him the whole story so that he would understand.”

“He even told me: ‘I thought there will be no more human rights violations under President Benigno S. Aquino III’s administration?’” I replied that nothing has changed and this time it will get worse,” Delen said.

The killing of Jayson and leaving JC without saying goodbye were not the only reasons why she cried. She was even more furious by the allegation that she and the other four arrested are NPA guerrillas. “When my husband was killed I abided by the legal process. What they did to us makes me want to rebel. But we will still go through the legal process and we will fight until my co-workers are released.”