You Are Here: Home → 2010 → December → 10 → Whitewash in The Investigation On The Deaths of Co, Cortez, and Borromeo Feared

The physical evidence gathered in the fact finding mission revealed that the trajectories of bullets were coming from and going to only one direction, refuting the military’s claim that there was a supposed gun battle between the military and members of NPA.

KANANGA, Leyte– Leonard Co, Sofronio Cortez and Julio Borromeo were not caught in a gun battle between the New People’s Army (NPA) and the19th Infantry Battalion on that fateful day of Nov. 15. This was the main finding of the independent body that recently conducted a fact finding mission from Nov. 26 to 28 in Kananga, Leyte. The report was presented in a press conference, Dec. 8.

The NPA is the armed wing of the Communist Party of the Philippines (CPP).

The citizens’ based fact finding mission was led by Agham (Science and Technology for the People), an organization of progressive scientists dedicated to making science serve the people, not the party list group. Scientists, environmentalists, colleagues of Co and cause-oriented groups also joined the fact finding mission. 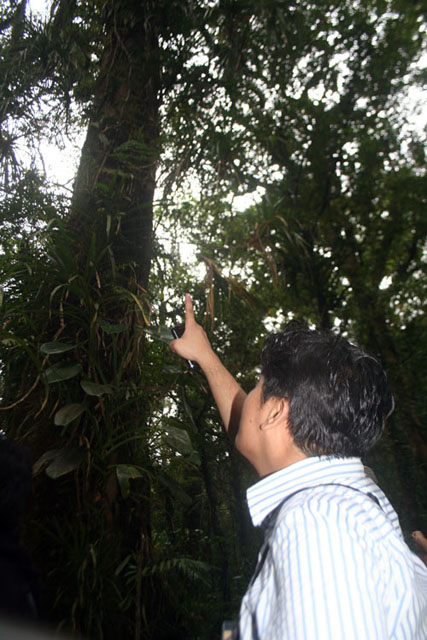 Dr. Giovanni Tapang points to the bullet marks on the tree during the fact-finding mission in Kananga, Leyte. (Photo by Anne Marxze D. Umil / bulatlat.com)

Based on news reports, Lt. Col. Federico Tutaan, commanding officer of the 19th Infantry Battalion (IB) of the Philippine Army, said the Nov. 15 incident was a legitimate military operation and Co’s team was caught in the crossfire. Two survivors, on the other hand, said no exchange of gunfire happened .

The physical evidence gathered in the fact finding mission revealed that the trajectories of bullets were coming from and going to only one direction, refuting the military’s claim that there was a supposed gun battle between the military and members of NPA.

On Nov. 15, Co together with four other companions resumed their work. Based on the account of officials of the Energy Development Corporation (EDC), at about 9:00 a.m., Co decided to go to W403 pad, which is out of the itinerary. (Click here for complete fact finding report). A pad is a forested area inside the EDC complex where research studies are mostly being conducted.

“But this is not out of the ordinary, according to the EDC,” said Dr. Giovanni Tapang, national chairman of Agham and convener of Justice for Leonard Co Movement, who joined the fact finding mission team. The EDC, said Tapang, was informed of Co’s decision.

W403 pad is where the incident happened. The EDC complex is also where the Leyte Geothermal Facility is operating. In a sworn statement by Ronino Gibe, 24, survivor in the shooting incident, at about 9:00 a.m. their team reached W403 pad. Their team was composed of Co, Cortez, Borromeo, Gibe and another survivor Policarpio Balute.

Gibe said it rained while they were conducting their work. They were surveying the forest, measuring the trees and marking them. Gibe said that at about 10 meters from the parking area (called well pad) of W403, they saw a big tree and it became the starting point of the survey. The big tree or Tree No. 1 (Mayapis tree) was marked with 5-01, three meters away they saw Tree No. 2 (Syzigium tree) and marked it with 5-02. About 59 meters from Tree No. 1 is where they saw Tree No. 3 (Tanguile tree).

In Tree No. 3 they saw a fruit called Talisay-gubat but could not find its mother tree. It continued to rain so Co decided to stop the survey. By then, Balute texted the driver, a certain Romy Momo, to fetch them at the W403 pad. But suddenly, the rain stopped and Co decided to continue working together with the rest of the group. A few steps away, they saw Tree No. 4, which they had a hard time identifying.

“Because the whole group was helping to identify the tree, I noticed that we were all looking up Tree No. 4 to see its leaves,” Gibe said in his statement. He said during that time, Borromeo was standing to his left and Co at his right side. Beside Co was Cortez and at the back of the tree was Balute. “After taking a picture of the tree, I put my cellphone back in my jacket. Just before 12:00 noon, we heard a burst of gunfire coming from behind us…we dived to the ground when we heard the gunfire. Then I heard someone shout, ‘We are not enemies, please stop.’ That voice sounded like Carping’s (Balute).”