MANILA – Just like any active boy his age in preschool, Diego “Egoy” Clamor, five, had practiced hard for their annual school presentation in the past few weeks. His practices were punctuated by his expectation that at last, at long, long last, his mother would be finally free to watch him and be with him and his father and his younger sibling. It has been 10 months since he last saw his mother home.

In his preschool’s annual children’s presentation, Egoy’s class acted as crocodiles who helped teach a frustrated young carabao how to dance. Other classes have transformed into dancing troupes channelling the wind, rainbow and rain, insects, tarsiers and monkeys, underwater creatures, flowers and trees, turtles and frogs. They all danced in bright costumes.

The presentation was a big production; it was recently staged in a university theater, with parents and extended families as audience, cheering squad and devoted photographers and videographers.

But Dr. Merry Mia Clamor, Egoy’s mother, was not able to join this army of proud, cheering parents in the audience. She and the rest of the detained health workers comprising the “Morong 43” remain as political prisoners as of this writing, despite the fact that a full week before, on Human Right’s Day last Dec. 10, cases against the 43 health workers have been ordered dropped by President Benigno “Noynoy” Aquino. 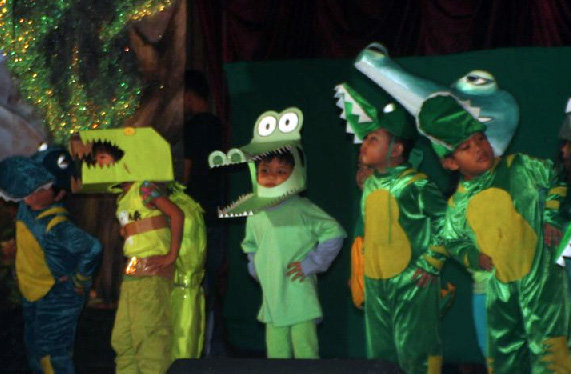 Egoy Clamor, third from left, during his preschool’s annual presentation on Dec. 16. (Photo by May Malaya / bulatlat.com)

“Current Philippine President Benigno Aquino III echoed a long running campaign carried by Filipino organizations in the Philippines and globally when he ordered the Department of Justice to withdraw charges against the health workers,” said Gabriela-USA in a statement.

The 43 health workers were illegally arrested last Feb. 6 on suspicion of being communist rebels, and detained under falsified charges of possession of firearms, said various progressive groups from health, women and human rights advocates in the Philippines and abroad. Despite evidence pointing to the 43 health workers’ task at hand on their February gathering –- that it was a training seminar for the health services for people who had limited access to health care — “their grueling fight to clear their names were worsened with the restriction of due process, torture and inhumane detention,” noted the Gabriela-USA.

Even President Aquino, shortly after being sworn into office last June, had admitted there was something wrong in the manner of the arrest of the 43 health workers.

In the wake of strong local and international support for freeing the detained 43 health workers, Egoy had thought that as early as last week, his mother would be home at last. His father has also been telling him that days ago, he had cheerfully told Bulatlat.com during one of his school practices for the presentation.

Egoy’s father, Roneo “Jigs” Clamor, is secretary-general of human rights alliance Karapatan. In between making Egoy’s costume for the school presentation, Jigs Clamor was in the thick of activities to monitor and work for the release of all political prisoners in the country.

But “the Armed Forces of the Philippines and Philippine military, who have the most stake in the arrest and detention of the Morong 43, have held up the freeing of the 43,” charged the Gabriela-USA.

Across the Philippines and in other countries where there are solidarity groups for Filipinos and migrant Filipino associations protesting the illegal detention of political prisoners, “vigilance on the withdrawal of charges” is being urged. Already, they criticized Judge Gina Centi-Escoto of the Morong Regional Trial Court Branch. Tasked to follow through with the case, Judge Centi-Escoto has “added another layer of bureaucratic trial until the actual release of the 43,” said Racquel Redondiez, chairwoman of Gabriela-USA.

After his part at the school presentation, Egoy replaced his makeshift crocodile costume. Later, he was buffeted by his classmates and other schoolmates being hugged and kissed by their parents. He told his father that night: “Life is sad without Nanay (Mom). If she’s here, we’d be happy. I hope to be able to hug her and kiss her and I wish she wouldn’t have to leave home again.”