MANILA – Two more of the so-called “Morong 43” were freed today, Dec. 28, after their lawyers convinced the court that the supposedly pending criminal cases that the police and military cited to prevent their earlier release involved namesakes.

Aldrin Garcia and Antonio de Dios, both 31 years old, walked out of the Metro Manila District Jail (MMDJ) inside Camp Bagong Diwa, at around 4:40 p.m. today. De Dios is wearing a white shirt printed with the words “Free the 43!” while Garcia is wearing a shirt that read “I am proud to be a community health worker.” Both of them carry black knapsacks containing some of their clothes.

The two went straight to the office of Bagong Alyansang Makabayan (Bayan) in Quezon City where they were met by supporters. They shared a meal of chicken and spaghetti to celebrate their freedom.

The two are among the five male detainees who were left behind at the BJMP after 33 of the Morong 43 were released on Dec. 17. Authorities said the five could not be freed that day because they allegedly faced other charges.

The Morong court issued release orders for the 43 health workers after the Department of Justice withdrew the charges against them. No less than President Benigno S. Aquino III declared that the rights of the 43 had been violated and that due process had not been observed. 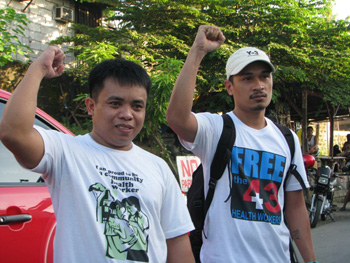 The 43 were arrested on Feb. 6 and were charged with illegal possession of firearms and explosives. They insisted that they were only conducting a health training at the time of their arrest and that the firearms allegedly found on their possession had been planted by the military.

The supposedly pending charges against Garcia and de Dios were for drug use and for violation of the anti-bouncing check law.

“I am happy that I am now free but sad too because there are hundreds more political detainees languishing in jail,” Garcia told the media after he walked out of prison. He added that he might have trouble sleeping tonight because he is excited to see his daughter, who is in the province and who was born while he was in jail.

The three others who remain in jail are Rogelio Villarisis, Edwin Dematera and Danny Pinero. Five more of their companions are under the custody of the military, allegedly coerced to testify against the others.

In an interview with Bulatlat.com, de Dios said he did not expect to be released today. When asked what he missed most, De Dios replied: “I miss my family and I miss serving the poor.”

Garcia said that he is angry that the government locks up those who serve the people but sets free those who commit heinous crimes.

Both Garcia and De Dios said they would immediately go back to their work of providing health services to the poor. Garcia is from Masbate and de Dios is from Sorsogon.

Edre Olalia, one of their lawyees, said they obtained a certification from the Department of Health Treatment and Rehabilitation Center clearing Garcia of drug dependency.