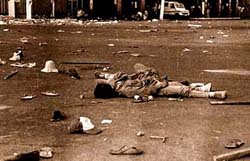 MANILA — As the 24th anniversary of the infamous Mendiola Massacre nears, farmers led by the Kilusang Magbubukid ng Pilipinas KMP) called on President Benigno S. Aquino III to bring justice and closure to the issue by reopening the investigation.

“President Aquino has yet to prove that he is no different from his predecessors. From the time he entered Malacanang he has yet to lay down any decree, ruling or program that will genuinely benefit Filipino farmers. His own mother former president Cory Aquino presided over a government that committed so many violations against the economic, political and human rights of farmers – none of us has forgotten the Mendiola Massacre, ” said KMP secretary-general Danilo Ramos.

“We challenge the 50-year-old president to re-open the Mendiola Massacre case and pursue a full-blown and independent probe. The murderers are still out there and worse, nobody from past administrations and even under Mr. Aquino’s administration dares to revive the investigation which we have been demanding since 1987.”

The phalanx of civil disturbance control units was comprised of policemen from the WPD, members of the Integrated National Police Field Force, members of the Philippine Marine Corps, and the Marine Civil Disturbance Control Battalion. Behind the line of these fully armed personnel were army trucks, water cannons, fire trucks and two Mobile Dispersal Teams prepared to launch tear gas.

Now, 24 years later, the KMP remains vigilant in demanding justice for the slain and punishment for the masterminds and perpetrators of the massacre.

Ramos, in a statement, called on Mrs. Aquino’s son, the incumbent president, to reopen the case and support the conduct of a full-blown and independent probe. The KMP has also issued the same call to former presidents Fidel V. Ramos, Joseph Estrada and Gloria Macapagal-Arroyo when they were in power, but the call was met with silence. All these years, the group said, justice has been denied the victims, their families, and the rest of the protestors who could have been killed in the attack.

Back in 1987, Cory Aquino issued Administrative Order No. 1, which created a body to investigate the massacre. Called the Citizens’ Mendiola Commission, the body later absolved the security forces involved in the brutal attack that left so many dead. It was composed of retired Supreme Court Justice Vicente Abad Santos as chairman, retired Supreme Court Justice Jose Y. Feria as member and Antonio U. Miranda. Created on January 22, 1987, it was tasked to submit its findings no later than February 7, 1987.

In its report, the commission said, among other things, that the KMP-led protest was not covered by any permit as required under Batas Pambansa Blg. 880, the Public Assembly Act of 1985. It also said that the crowd dispersal control units of the police and the military were armed with .38 and .45 caliber handguns, and M-16 Armalites, which is also in violation of the aforementioned law. It was also illegal that the security men assigned to protect the WPD, INP Field Force, the Marines and supporting military units, as well as the security officers of the police and military commanders were in civilian attire .

As a result of the probe, the commission came out with a list of recommendations, some of them the criminal prosecution of four unidentified, uniformed individuals — none of whom the National Bureau of Investigation (NBI) were able to find much less criminally charge — for firing at the direction of the marchers.

It also recommended the filing of charges against several protestors, none of whom were named, for supposedly carrying “deadly or offensive” weapons. Military and police officials Gen. Ramon E. Montaño, Gen. Alfredo S. Lim, Gen. Edgar Dula Torres, Police Maj. Demetrio dela Cruz, Col. Cezar Nazareno; and Maj. Felimon Gasmin were given slaps on the wrist for “their failure to make effective use of their skill and experience in directing the dispersal operations in Mendiola.”

The last and the most significant recommendation of the commission was for the deceased and wounded victims of the Mendiola incident to be compensated by the government, but no indemnification was ever given the survivors. In 1988, the Manila Regional Trial Court Branch 9 under Edilberto Sandoval issued a decision to dismiss a P6.5-million class suit filed by relatives of the victims. The Supreme Court upheld the decision in 1993 which cleared the Cory Aquino government, citing the state’s immunity from suit.

In its March 19, 1993, decision on the case of the Mendiola Massacre, the SC said, “The inescapable conclusion is that the State cannot be held civilly liable for the deaths that followed the incident.”

In 2007, members of the Kilusang Magbubukid ng Pilipinas installed a granite marker at the Bantayog ng mga Bayani in Quezon City, commemorating the 20th anniversary of the incident.[

In 2008, Anakpawis Rep. Rafael Mariano called for the passage of a law to indemnify the victims of the massacre.

On January 22, 2011, KMP will lead nationally coordinated protests to commemorate the martyrdom of the victims of the massacre and to denounce the continuing neglect of farmers and agrarian concerns by the present government. It is also demanding the junking of the extended Comprehensive Agrarian Reform Program with reforms (CARPer) law and the passage of the progressive Genuine Agrarian Reform Bill (GARB).