Cabbies Not All That Excited Over Hike in Taxi Fare

The increase in the flag-down rates is good only if taxi operators, many of whom can be quite abusive and greedy, won’t increase the “boundary” they collect from cabbies.

MANILA — Marcelo Rozimo Pascua, 36, has been a taxi driver for five years. He is the breadwinner of the family; his wife, Shirley, 35, stays at home, taking care of their children. Any additional income that would come their way is always good news.

Pascua, however, has mixed feelings about the recent news that the flag-down rates for taxis in Metro Manila and other key cities will be increased beginning Jan. 21. He told Bulatlat.com that the flag-down rate of P40 ($0.90, at the exchange rate of 44 pesos to the US dollar) plus P3.50 for every 400 meters is ideal, especially at a time when prices — from toll fees, transport fees, sugar and basic commodities — are all going up.

AUDIO
Listen to taxi driver Gilbert Osmillo explain why he is not in favor of the increase in the flag-down rate
[flashvideo file=https://www.bulatlat.com/wp-content/uploads/2011/01/01142011_taxidriver_clip.mp3 height=24 width=250 /]

The new rates is good news, he said, but only if taxi operators do not increase the so-called boundary, or the amount the taxi driver pays the operator as rent for the car for the day.

Pascua said that in past flag-down rate hikes, taxi operators always increased their boundaries, thus offsetting whatever gains the increase supposedly brought to the drivers.

Noel Siatong, 38, a taxi driver for five years now, said the hike in the flag-down rate favors only his operator, whose earnings are expected to increase because of it. In fact, he hopes that the increase will not be implemented at all.

“Our operator will only increase the amount of our current boundary,” Siatong said.

There will also be fewer passengers for taxis because people will instead use cheaper modes of transportation in order to save money. 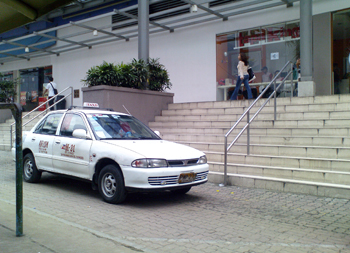 Marcelo Rozimo Pascua waits for passengers for up to an hour at a mall in Quezon City because he saves more on gas doing that rather than roaming around the city looking for passengers. (Photo by Anne Marxze D. Umil / bulatlat.com)

Gilbert Osmillo, 28, worries that cost of the new meter that prints receipt — about P20,000 — will be shouldered by cabbies like him. Often, he said, taxi operators defray the cost of new meters by increasing the boundaries they collect from the cabbies.

Osmillo also said he is fine with the present P30 flag-down rate — if only the price of gas does not increase.

For some taxi drivers like Pascua and Osmillo, the increase in the flag-down rate is an added burden not only to passengers but also to them. Pascua works for at least 12 hours a day to meet the P850 boundary. Pascua usually earns a gross income of about P2,500 each day. Deduct from that the P850 boundary and the P1,000 he spends for gas. The remaining P650 is his take home pay. And there are days when his gross income wouldn’t even reach P2,000.

On the other hand, Siatong’s boundary for a 24-hour work day is P1,000. His boundary depends on how new (or old) the taxi is. He used to work for R&E taxi, one of the largest fleets in Metro Manila, but left when the boundary reached as high as P1,600. He currently works 24 hours straight every other day, as that’s the arrangement with the operator.

While some taxi drivers are in favor of the P40 flagdown rate increase, they insist that taxi operators shoulder the cost of buying and installing the new meters.

Osmillo said the new meter will be calibrated and then sealed by the Land Transportation Franchising and regulatory Board (LTFRB), with all the fees operators usually charge to the drivers.

The high cost of gas has forced many of them to be less mobile, preferring instead to wait for passengers for up to an hour at grocery stores and malls – in Osmillo’s case, at the SM Hypermart on Edsa-Quezon Avenue — rather than waste their gas roaming around the metropolis looking for passengers. 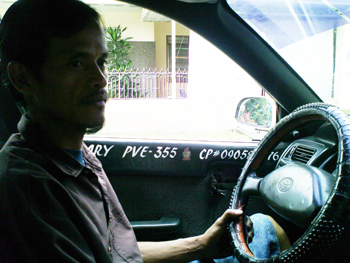 A taxi driver these days, Pascua said, is forced to be creative – “madiskarte” is how he put it – in order to improve his take-home pay. “We do all sorts of saving, like converting our gas from gas to liquefy petroleum gas (LPG),” because LPG is less expensive.

But this conversion, which costs about P20,000, the cabbies had to shoulder as well. In the case of Pascua, his operator increased the boundary from P600 to P850.

As if these deductions and impositions are not enough, the drivers also pay for the expenses incurred in accidents. This, Pascua explained, is the reason why some drivers hoodwink their passengers. “Some do tricks with their meter so it will charge faster than usual. Some ask for additional fare or they refuse because the passenger’s destination is far,” he said.

“We really try hard to make ends meet from what I earn,” Pascua said.