You Are Here: Home → 2011 → January → 16 → The Slaves of Madagascar: Abused OFWs Repatriated for Fighting for Their Rights → Page 2

The Slaves of Madagascar: Abused OFWs Repatriated for Fighting for Their Rights

“Whenever I work abroad, I always expect that working conditions would be usually harsh and that one of the biggest challenges is enduring being away from my family,” Costes said. “It is a sacrifice I was willing to make but it would be in vain if we are not compensated properly. When OFWs are being denied fair salary, they will put up a good fight. Why else would we leave the country in the first place?”

Since Kentz has taken over the operations of Ambatovy Project, the workers’ rate per hour were reduced to $3.33 from $4. Complaints of salary discrepancy flooded the company’s accounting department as some of the workers’ mandays – or the days of work they put in — were not paid. Salary delays also became frequent.

Kentz also hired a company in the Philippines, Consortium, to deposit the workers’ salaries into their bank accounts, something that the previous contractor, Keangnam, did on its own.

Kentz also did not issue them any pay slips, which in itself is a violation of both Philippine and Madagascar laws, the workers alleged in their complaint to Migrante International, which has been helping them in pursuing their case before the POEA.

During this time, the Filipino workers were already planning action against the company for unfair labor practice. “We are not fighting our company. We are fighting for our rights,” Costes said before his colleagues in a protest action in front of the POEA office on January 11. 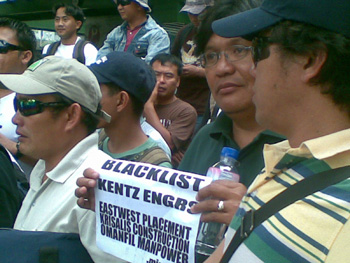 The OFWs will soon file a case against Kentz, a major contractor in Madagascar. (Photo by Janess Ann Ellao / bulatlat.com)

Despite the complaints of the workers, Costes said Kentz ignored them. This forced the workers to stage rallies at their work site, where more than 300 OFWs participated. They were able to launch three sets of protest actions from November until December. Finally, the company was forced to listen, summoning the workers’ leaders and asked about their demands were each time they held protests.

“The company would release our ‘balances’ the following day to pacify the workers,” Costes said. “We were treated like children who are given candies so we would stop crying,” he said. “They were not really addressing our demands.”

On December 15, their third rally, Costes said he was “kidnapped” by the company’s security personnel. At around 1:00 p.m., some Kentz employees went to the workers barracks and asked Costes to go with them.

“I will not resist. I will go with you,” Costes remembered telling the Kentz employees. Outside the barracks, however, Costes was surprised that security personnel “in full battle gear” were waiting to take him.

“I thought it was my end. I was afraid,” Costes said. The plan, he said, was to hide him from other protesting Filipino workers to demoralize them from staging another rally. Security personnel had to hide Costes from one office to another, to keep him from being seen by the other workers.

Kentz, however, was wrong. The Filipino workers, Costes said, became so mad that they barricaded the compound to prevent  the company managers from entering the work place. “They (Kentz) should have never took me  hostage,” Coster said. “The emotions were high at that time. It was a good thing that no one was hurt.” 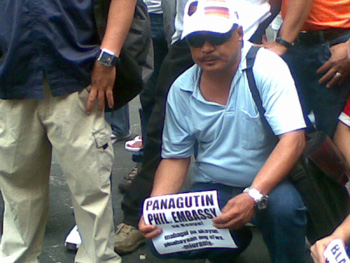 The workers say the Philippine embassy in Kenya hardly acted on their complaint against Kentz.(Photo by Janess Ann Ellao / bulatlat.com)

The following day, Kentz came out with a memorandum stipulating that 76 of the Filipinos who staged the rally would be sent home. The Filipinos, Costes said, had become a threat to the company. They were then moved to a hotel near Madagascar’s airport and told that their respective passports and tickets would be sent to them in the soonest possible time. These, however, started to arrive at their hotel only on January 8..

While waiting for their passports and tickets, Costes and the others were able to contact the Philippine embassy in Kenya, which services Madagascar, and informed officials of what they were going through. The embassy sent their staff to Kentz to supposedly investigate what the Filipinos were complaining about but the company did not let them in, making them wait instead outside the office for several hours.

“We later learned that Kentz ordered to have the barracks fixed first so that it would not look overcrowded,” Costes said. “We, however, have not heard anything from the Philippine embassy in Kenya ever since.”

Terry Ridon, chairman of the League of Filipino Students and a law intern at the University of the Philippines College of Law, said that the plight of the OFWs in Madagascar highlights the “unacceptable nature of the Philippines’s labor export policy.” Ridon, who first met the Madagascar OFWs in Tambo Airport in Johannesburg, now provides  the workers with legal assistance.

Ridon said the Philippine Embassy in Kenya should also be held accountable as they “intervened belatedly when the workers were already being repatriated to the Philippines.” He added that embassy officials “were never to be found during the height of the labor problems in the work site. They cannot now make press releases to assure the public that they did their job, when in fact they did not.”

The workers said they would soon file cases for nonpayment of overtime and breach of contract against Kentz and its local counterparts at the National Labor Relations Commission.