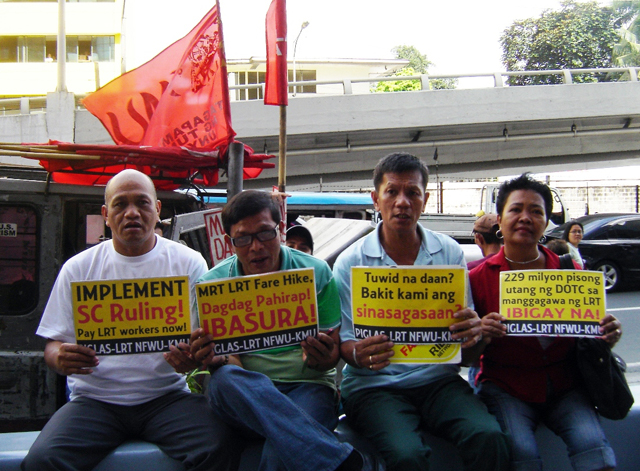 MANILA — The government is bent on honoring its guarantee of high return on investments of huge private corporations, to the point of considering drastic increases in MRT-LRT fares, but it cannot even pay its employees their legally mandated separation pay. LRT employees who were dismissed from work for having launched a crippling strike nearly a decade ago joined the RILES Network in condemning the “continued injustice and poverty in the supposedly righteous path of the Aquino government.”

The workers protested in front of the offices of the Department of Transportation and Communication (DOTC) Tuesday — with some of them getting their heads shaved — a few hours before a scheduled consultation with DOTC’s assistant secretary for administrative and legal affairs Raquel Desiderio.

The dismissed workers of LRT complained that justice has been denied them for nearly a decade now. They told Bulatlat that they were illegally terminated in 2000, under then President Joseph Estrada, at the height of their strike. The union’s charge of illegal dismissal was subsequently supported by both the National Labor Relations Commission and the Supreme Court. But its logical implementation of either reinstating them, or giving them their legally mandated separation pay, was ignored under President Macapagal-Arroyo.

“Some of the workers awaiting the implementation of the Supreme Court order have died from illnesses,” said Sammy Malunes, president of the LRT employees union. Malunes is now the spokesperson of RILES Network, an alliance of organizations saying the public railways are for the people.

The workers hope that this time, the DOTC and the Aquino government would be present in the “consultations” they themselves have set. Malunes told Bulatlat that they hoped it is the workers and the riding public who would be the “government’s priority”.