MANILA — An environmental advocate and broadcast journalist was shot dead in Puerto Princesa City, Palawan, Monday morning. Dr. Gerry Ortega, a veterinarian, was killed by a gunman in San Pedro Village after finishing his daily radio program on DWAR Palawan.

According to reports that quoted eye-witnesses, Ortega was about to buy clothes in an ukay-ukay stall when he was shot in the head. Police have already apprehended a suspect, identified as Marvin Alcaraz, who was said to be from Taguig City, Metro Manila. The suspect claimed that he only intended to rob Ortega. Police found a .45 caliber gun in his possession. No motive has been established as of this writing.

Ortega is a known pro-environment advocate and has worked with various environmental groups and associations on pro-environment and community-based projects. He gained local popularity as a wildlife veterinarian and became known as “Doc Gerry.”

For 12 years since 1988, he was the director of the Crocodile Farming Institute, since renamed the Palawan Wildlife Rescue and Rehabilitation Center. He also served as a member of the Palawan provincial board from 2001 to 2004. He ran but lost in the 2004 gubernatorial race in the province. 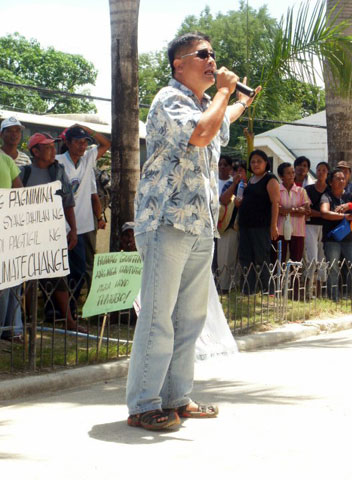 This photo of Ortega was taken during one of the the anti-mining rallies in Palawan. (Contributed photo)

According to environmental groups, in recent years Ortega was involved in vigilant advocacy campaigns, participating in anti-mining protests and pressing for the Palawan community’s share in the Malampaya natural gas project. He was also active in the Bayanijuan eco-tourism project of the ABS-CBN Foundation, serving as its project manager in Puerto Princesa and winning last year’s Best Community-based Ecotourism Project at the 2010 Pacific Asia Travel Association (PATA) Gold Awards.

Ortega left behind a wife and five children.

The National Union of Journalists of the Philippines described Ortega as a “staunch critic” of a powerful local politician. The group said Ortega was vocal against mining operations in Palawan. It did not say, however, whether this was a direct motive for his murder.

“If the killing is proven to be work-related, he would be the second to be murdered under the new administration,” the NUJP said. Ortega is the second journalist to be slain since President Benigno Aquino III took office in June 2010. Aquino has promised to make the Philippines safer for journalists.

The International Federation of Journalists (IFJ), meanwhile, said Ortega’s murder is a reminder that the Philippines is still among the world’s most dangerous countries for media workers.

IFJ Asia-Pacific director Jacqueline Park said Ortega’s death, “like those of all his colleagues before him, must not go unpunished by authorities in the Philippines.” The IFJ represents 600,000 journalists in 125 countries.

The Center for Media Freedom and Responsibility, in a statement, quoted Joselito Alisuag, the Ortega family’s lawyer, as saying that the broadcaster was a “staunch critic” of illegal mining activities in Palawan. Ortega also reported on alleged corruption in the provincial government in his program.

Alisuag told the CMFR that the killing could only be related to Ortega’s journalistic work. “He did not have any personal enemy, nor does he have any vice,” Alisuag said.

Alisuag said Ortega and one of his children, who is also a broadcaster, had also been receiving threats prior to the incident, according to the CMFR.

The NUJP said that 142 journalists had been murdered since the fall of dictator Ferdinand Marcos and the restoration of democracy in 1986. This includes 30 journalists who were among 57 people murdered in the Maguindanao Massacre in November 2009.