Lawyer says Co’s family was not a party to the DOJ-NBI panel investigation and that they did not have access to all the evidence the panel had. Neither did they get the opportunity to controvert the claims of the military denying responsibility for the killing.

MANILA — Family and supporters of Prof. Leonard Co today filed before the Department of Justice (DOJ) a request for the conduct of a “thorough, credible and impartial preliminary investigation” into the incident that led to the death of the botanist and his two companions.

Prof. Giovanni Tapang, chairman of the scientist group Agham and convenor of JLCM and Renato Reyes, Bayan secretary general, gave their moral support to the family, saying they will do all they can to help expose the issue that spoke much about the justice system in the Philippines and how human rights are faring under the administration of President Benigno S. Aquino III. 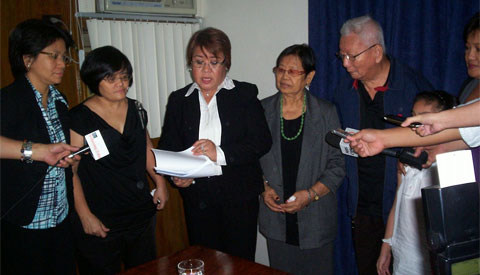 The family of Leonard Co and their lawyer, Evalyn Ursua, filed before DOj Secretary Leila de Lima a request for a new investigation into the botanist’ death. (Photo by Ina Alleco R. Silverio / bulatlat.com)

Accompanied by their lawyer Atty. Evalyn Ursua, the family denounced the Jan. 15 report and recommendation of the DOJ and the National Bureau of Investigation (NBI) fact-finding investigation panel. Ursua said that based on their own examination of available documents submitted to the panel, they find the findings and conclusions of the report “flawed and contrary to evidence.”

“Since the investigation that the DOJ-NBI panel conducted was not a preliminary investigation under the Revised Rules of Criminal Procedure, we — the family and the lawyers — did not have access to all the evidence the panel had. Neither did we have the opportunity to controvert the claims of the state security forces denying responsibility for the brutal killing of Prof. Co, Sofronio Cortez and Julio Borromeo,” Ursua explained.

She said they look forward to a preliminary investigation by an impartial and competent investigating panel where the families of all three victims would be given due process do prove their claims.

Ursua made two specific requests to DOJ Secretary Leila de Lima regarding the conduct of the preliminary investigations.

One, that all firearms used by the 38 soldiers involved in the Nov. 15 attack that killed Prof. Co, Corte and Borromeo be subjected to ballistic examination, and, two, that a second ballistic examination by the Firearms Identification Section of the PNP Crime Laboratory headed by Mr. Reynaldo Guzman be conducted. The bullet fragments taken from the bodies of the victims and the firearms used by the 38 soldiers must be examined, Ursua said.

“We are now pushing for criminal charges against all those involved in Prof. Co’s murder. There are eyewitness accounts and forensic evidence that should be taken into consideration by the authorities that will give lie to the findings that the security forces of the Aquino government did not shoot and kill the three victims,” Ursua said.

“We can prove that the soldiers fired at close range, and that in fact there were no members of the new People’s Army (NPA) in the area when the shooting commenced. It was not a firefight that led to the death of the three victims. It was a case of out-and-out murder. There was also treachery. Walang kalaban-laban ang mga bitima, pero tuloy-tuloy sa pamamaril ang mga sundalo,” Ursua said.

In this video clip, relatives of Leonard Co, the Philippines’s foremost botanist who was killed allegedly by the military, denounce the findings of a justice department panel clearing state security forces.

Ursua added that they will file supplemental documents with the Committee on Human Rights (CHR). The CHR will hold its own fact-finding mission and hearing on January 26-27 in Kananga, Leyte. Prof. Co’s wife, father and mother will fly to Leyte to take part in the hearing.

For her part, de Lima agreed to the request of the Co family for a preliminary investigation, saying that she will keep an open mind.

“This is a new process, and more evidence and testimonies will be presented. A different panel will examine and review the findings. I want to reassure the Co family and Atty. Ursua that in this process, there will be objectivity and impartiality. Both sides will be heard,” de Lima said.

The DOJ recently earned the ire of the human rights community when its three-person panel practically exonerated the AFP of any wrongdoing in the incident.

De Lima said it was by no means “an awkward situation’”that the DOJ is again being called to address the Co case.

“Again, this is a new process, and it will be stricter as the principles of evidentiary evidence and appreciation of evidence will apply.”

Yesterday, during a picket at the DOJ, friends, colleagues and relatives urged the de Lima to act on their request for an impartial investigation.

“We call on to Sec. De Lima to review the said report of the DOJ. We hope that she will also read the affidavits of the other two witnesses because the report was very different from the sworn statement of the two witnesses,” said Dr. Lily Co-Austria, Co’s youngest sister.

Tapang said the DOJ panel’s report used selective means and double standards to deduce conclusions from the witnesses’ statements and the evidence made available by the military.

In the complaint affidavit they filed, Ursua said that there are clear evidence and testimonies to show that Co, Borromeo and Cortez were murdered by the 19th IB of the Philippine Army.