To prevent rebels from gaining ground in Toril, the Philippine Army established a military detachment in a village and sent out more soldiers. The soldiers are called “Peace and Development Teams.” But residents find the soldiers’ conduct rather unbecoming of the new tag by which they are now called.

Sidebar: In Isabela, Soldiers Pretend to Be Guerrillas

DAVAO CITY — Toril district, an area just about 20 kilometers away from Davao City proper, has been the site of recent clashes between members of the Armed Forces of the Philippines and the New People’s Army (NPA).

To prevent rebels from gaining ground in this southern portal to Davao City, the Philippine Army established a military detachment in a village called Baracatan and sent out more soldiers starting October last year. The soldiers have since been called “Peace and Development Teams or PDTs.”

But the residents near the said military detachment find the soldiers’ conduct rather unbecoming of the new tag by which they are now called.

“They knock on each house and ask all sorts of questions, like how many live in the house, the ages of the children, especially the men which we find rather unusual and intimidating,” Angela Petron, 55, a local resident told Bulatlat.com. 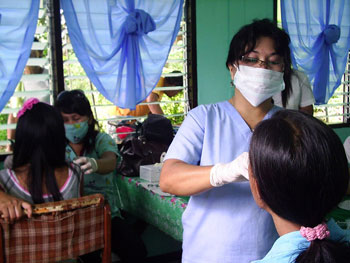 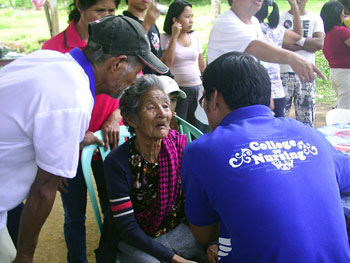 Toril residents avail themselves of free medical services during the “Peace and Human Rights Mission Tour” by the group Exodus for Justice and Peace. (davaotoday.com)

Marilou Cabatingan, 37, another resident, said she was breastfeeding her newborn when the soldiers came. When she refused to heed the soldiers’ call, one of them insinuated that she might be “hiding something.”

Another local resident, 62-year-old Angelita Rabon, said a certain Lt. Ariel Lobusta came to her house and chided her into admitting that she had let an NPA rebel leader in.

The officer also told her that she might also be hiding some of the rebels’ guns. Although made in jest, Angelita said, still, it made her very nervous. “I had to keep an eye on him just to make sure that he could not plant any evidence just to justify his claim,” Angelita said.

The three were among the more than 300 residents who availed of the free medical check-up and dental services provided by the group Exodus for Justice and Peace (EJP) during the “Peace and Human Rights Mission Tour” on January 16 at the village hall of Baracatan.

Like most people in the rural areas, the residents of Toril face the problem of landlessness and lack of access to basic health care from the government. The village has a health center but only a midwife comes to the center once a month.

“We are thankful for activities like this. The last time we had a free medical check-up was during the Araw ng Baracatan celebration two years ago,” Elizabeth Teleron, a resident of Baracatan said.

“When there’s hardly any money for food, this is such a privilege,” she said adding that to be able to see a doctor, one would need at least P60 to pay for fare, and P80 to pay for medical check-up.

Victoria Alonsagay, the chairperson of the Toril District Farmers (Todifa), said most of the residents in the area are farm caretakers.

“Most of us just rely on occasional work assigned by landowners. But they pay very low. Some give P100 and others, P130 for a day’s work of, say for instance, weeding out a farm, or harvesting fruits,” she pointed out.

It was Alonsagay’s group that requested the EJP to come to their village.

Bishop Delfin Callao of the Iglesia Filipina Indepiendente, a convenor of the EJP said Toril qualifies as their area of mission because this setting shows how quality of life is made worst by “militarization.”

EJP is an alliance of groups of the religious, lawyers, academe, and other professionals. Formed in 2008 to assist hundreds of residents from Mangayon village in Compostela Valley who fled their village to evade Phillippine Army troops who were staying in their community, harassing and even torturing some of the men in the village, EJP has since become a support group for victims of human rights violations.

The Philippine military has announced that its new campaign strategy to quell the 42-year-old communist-led rebellion will rely on “civil military operations rather than traditional combat mobilizations.”

Alonsagay, the Todifa chair, said 15 of their members were called to the barangay (village) health center when the PDTs from the Philippine Army came to their village in October last year.