Pamalakaya, the fisherfolk group, is seeking the UN Special Rapporteur on Food to intervene in what it says is the continuing destruction of marine resources in the Philippines under President Aquino’s public-private partnership program. The group says these projects not only damage the environment but affect as well the livelihood of communities.

MANILA — The communiqué the Philippine fisherfolk organization Pambansang Lakas ng  Kilusang Mamamalakaya (Pamalakaya) to the United Nations on the destruction of local coastal waters was recently endorsed by some 24 international groups from Asian and African.

Pamalakaya has made the position that said projects are damaging the marine resources as well as negatively affecting the livelihood of communities. They are seeking the UN Special Rapporteur’s intervention on the matter.

Hicap said the anti-people and anti-national development programs began during the Arroyo regime are being continued under the Public-Private Partnership (PPP) scheme of the Aquino administration. He said Aquino’s PPP projects will continue to a have negative impact on the lives and livelihood f thousands of small fisherfolk.

“Fishing areas primed for corporate takeovers are also under threat of being irrevocably destroyed,” he said.

Advocates around the world have been working for years to protect coastlines from ill-advised development projects. Intact beaches, mangroves, sea grass beds, and coastal waterways buffer inland areas from hurricanes and typhoons. When development projects destroy these ecosystems, the potential for storm damage increases. All this besides the devastation wrought against the livelihood of residents. 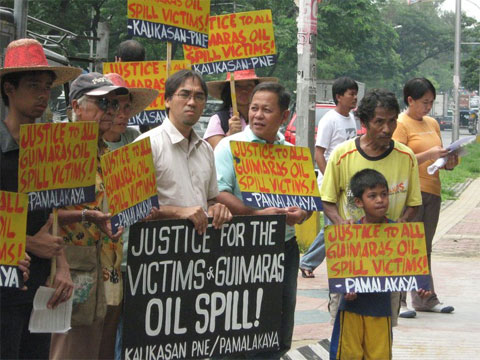 In the communiqué, the group originally sent to de Schutter in Ocober 2010, the fishers group cited at least nine cases wherein food and fish production, livelihood rights and the environment are placed under constant jeopardy by public-private partnership projects.

1)The impact of offshore mining in Tanon Strait, a protected seascape separating the island provinces of Cebu and Negros.

From year 2005 to 2008, the Philippine government through the Department of Energy allowed the Japanese oil and gas exploration firm JAPEX to explore the protected seascape despite the resistance from small-scale fishermen, coastal residents and environmental groups.  Fish catch of small fishermen were significantly reduced from 10-15 kilos a day to 1-3 kilos a day because of offshore mining activities.

2) The reclamation of more than 7,000 hectares of coastal areas in Cavite, which is part of Manila Bay. This was part of the construction of Road 1 Expressway Extension Project.

Another 5,000 hectares of coastal areas adjunct to the expressway project will be reclaimed for the construction and modernization of seaport, eco-tourism projects, gambling and entertainment centers. Through the years, Pamalakaya has also been very vocal against reclamation projects in the Manila Bay area. It said that close to three million people in Metro Manila and Cavite are still dependent on fishing as principal source of livelihood. Continuing moves to build more projects in the area not only kill the livelihood of small fishermen, but destroy their homes and communities.

The setting up of casino and resorts, including SM’sMall of Asia, was all in the master plan of the government known as Manila Bay Master Development Plan that officially started during Fidel Ramos administration. Projects will reportedly be completed between 2020 and 2025.

3) The P 18.7 B Laguna Lake Dredging Project funded by the Belgian government.

The project involved the dredging of the 94,000 hectare lake and the reclamation of not less than 20,000 hectares of coastal shores for various infrastructure projects. The project was support infrastructure to bigger business undertakings that will cause the displacement of no less than 50,000 fishing families who heavily depend on the lake sources for livelihood and food.

4) The 13,000 hectare Aurora economic zone project (Apeco) in Aurora province which will displace farming and fishing communities in favor of big projects funded by foreign and national capitalists.

The project involves development of a major Freeport zone, magnetite mining and the creation of world class international and seaport in Northern Philippines.

This covers five coastal municipalities. The offshore mining of magnetite materials will affect the livelihood of more than 20,000 fishing families in the province.

7) The widespread conversion of coastal municipalities of Nasugbu, Lian, Calatagan, Calaca, Lemery and Tuy into eco-tourism areas. All these are in the first district of Batangas province in Southern Tagalog region.  More than 20,000 hectares of fishing and farming areas are covered by this district wide eco-tourism project.