You Are Here: Home → 2011 → February → 4 → Pamalakaya Willing to Engage in ‘Fish Talks’ with Government over Laguna Lake Rehabilitation

“We cannot rehabilitate the lake without the participation of the people sourcing their livelihood and living along lake shore.” – Save the Laguna Lake Movement

MANILA — When Laguna lake overflowed during typhoon Ondoy and flooded the towns along the lake shore for months after, talks regarding the rehabilitation of the lake were revived. Before that, during the height of El Niño, Laguna lake was also being eyed as a source of Metro Manila’s drinking water. However, all of these proposed projects were put on hold because it would displace fisherfolk communities along the shore of the lake.

Now, the affected fisherfolk communities are willing to negotiate with the Aquino government regarding the controversial Laguna lake development projects. 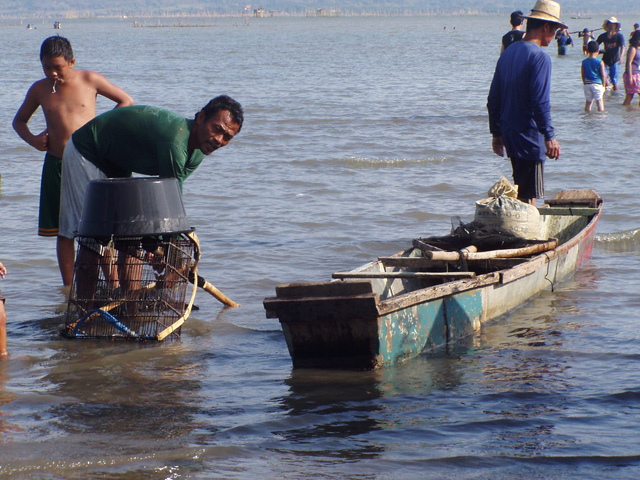 A fisherfolk at the Laguna de Bay (Photo by Angelica de Lara / bulatlat.com)

This was announced by officials of the Pambansang Lakas ng Kilusang Mamamalakaya ng Pilipinas (Pamalakaya) recently as they urged the Laguna Lake Development Authority (LLDA) to engage in “fish talks” with small fishermen and other poor residents to resolve the long-running disputes and problems regarding the use of the 94,000 hectare lake.

Pamalakaya national chair Fernando Hicap said that his group and the allied members of the Save the Laguna Lake Movement (SLLM) are willing to negotiate regarding the project provided that the national government first drop the proposed P 200-billion ring dike project that would cover the 100 kilometer circular stretch of the lake.

“This is crucial even before the government calls for a multiparty consultation on how to rehabilitate the lake. All plans to demolish the homes of the 400,000 families living within the lake’s immediate perimeter should also be permanently shelved. These are non-negotiable terms,” said Hicap.

SLLM convener Pedro Gonzalez, in the meantime, said his group is willing to talk with LLDA so that the issues affecting residents can be addressed, as well as the program for the comprehensive rehabilitation of Laguna Lake.

“We cannot rehabilitate the lake without the participation of the people sourcing their livelihood and living along lake shore,” Gonzalez said.

Laguna Lake is a home to six million people, according to the latest population survey conducted by the national government. Around two million live in the immediate surroundings and lake shore of Laguna de Bay. There are 23 fresh water fish species, 10 salt water fish species and 26 types of lake-water based plants in the lake, all of which are the source of direct and immediate livelihood to 100,000 fishing families in the area.

The yearly fish production in Laguna Lake through fish capture and fish culturing (fish pens and fish cages) amount to 410,000 metric tons. This provides for the fish needs of more than 10 million people in Metro Manila.

Pamalakaya and SLLM leaders proposed the “fish talks” in response to LLDA’s call for all stakeholders in Laguna Lake— the fisherfolk, factory owners, aquaculture operators, concerned government agencies and officials and private interests to sit down and discuss a strategic and effective master plan to save Laguna Lake from further destruction.

They said LLDA general manager Rodrigo Cabrera should stop pushing a master plan authored by and designed for big private interests in Laguna Lake. According to them, there would be no genuine rehabilitation if it involves the policies of privatization and denationalization.

“There would only be more destruction, both for the environment and the livelihood of the people,” they pointed out. 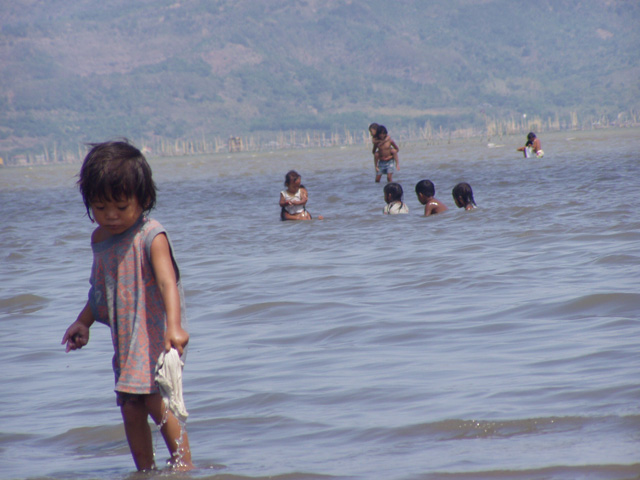 The SLLM said the P 200-B ring dike project is worse compared to the canceled P 18.7 B Laguna Lake Dredging Project. “Now everything is clear. Aquino wants his own terms when it comes to all rehabilitation projects in Laguna Lake. He prefers to spend P 200 billion and not P 18.7 billion. He approved this new project without first listening to the residents and hearing their views about how the project will affect their lives and livelihood,” said Gonzalez.

Gonzalez said it was impossible not to see that the new project is a money-making scheme for the government.

“The greed for bigger funds is what is really fueling this project and not so much environmental concerns or concern for the welfare of residents. Apart from the serious economic and social implications of the project, the P 200-B ring dike undertaking will also be prone to bureaucratic corruption.”