Tales of Woe, Suffering, and Neglect of OFWs in Prisons Abroad

In jail, maltreated, away from home and without any assistance from the government, these OFWs are no longer concerned about pursuing their dreams of escaping poverty. Their main concern now is to survive their ordeal and be able to go home to their families as free individuals.

Nenita Montillano vividly remembers her daughter’s parting words when she left to work for Thailand on March 2, 2010. Rose Jean Mahilum, 34, has high dreams for her family. She wanted her children to finish schooling. But, for eight months now, Mahilum has been languishing in jail, left to fend for herself, as the present government continues to neglect her and other overseas Filipino workers suffering behind bars despite pleading innocence.

Mahilum was recruited to work as a singer in Thailand. Upon arriving there, however, her recruiter, Marjorie Ambuyog, asked her to do errands such as picking up and sending packages to various individuals. She did as she was told, afraid that she would be sent home.

On May 21, Mahilum’s recruiter asked her to go with a fellow Filipino to Iran to pick up an “important package.” A day before their scheduled flight back to Thailand, however, Mahilum’s companion left her alone without any explanation. On May 27, at the airport, she was arrested for carrying 1.6 kilograms of heroine, which, without her knowledge, was inside the supposed package she was asked to get.

It was only on June 27 when her family back home found out about the incident and it was only because Mahilum managed to phone her mother. Prior to her call, her family was already worried about Mahilum who did not call for more than a month. They expected Mahilum to be home by June 26 to attend her sibling’s wedding.

“I was afraid and very nervous,” Montillano told Bulatlat.com when asked what she felt when she learned the news. 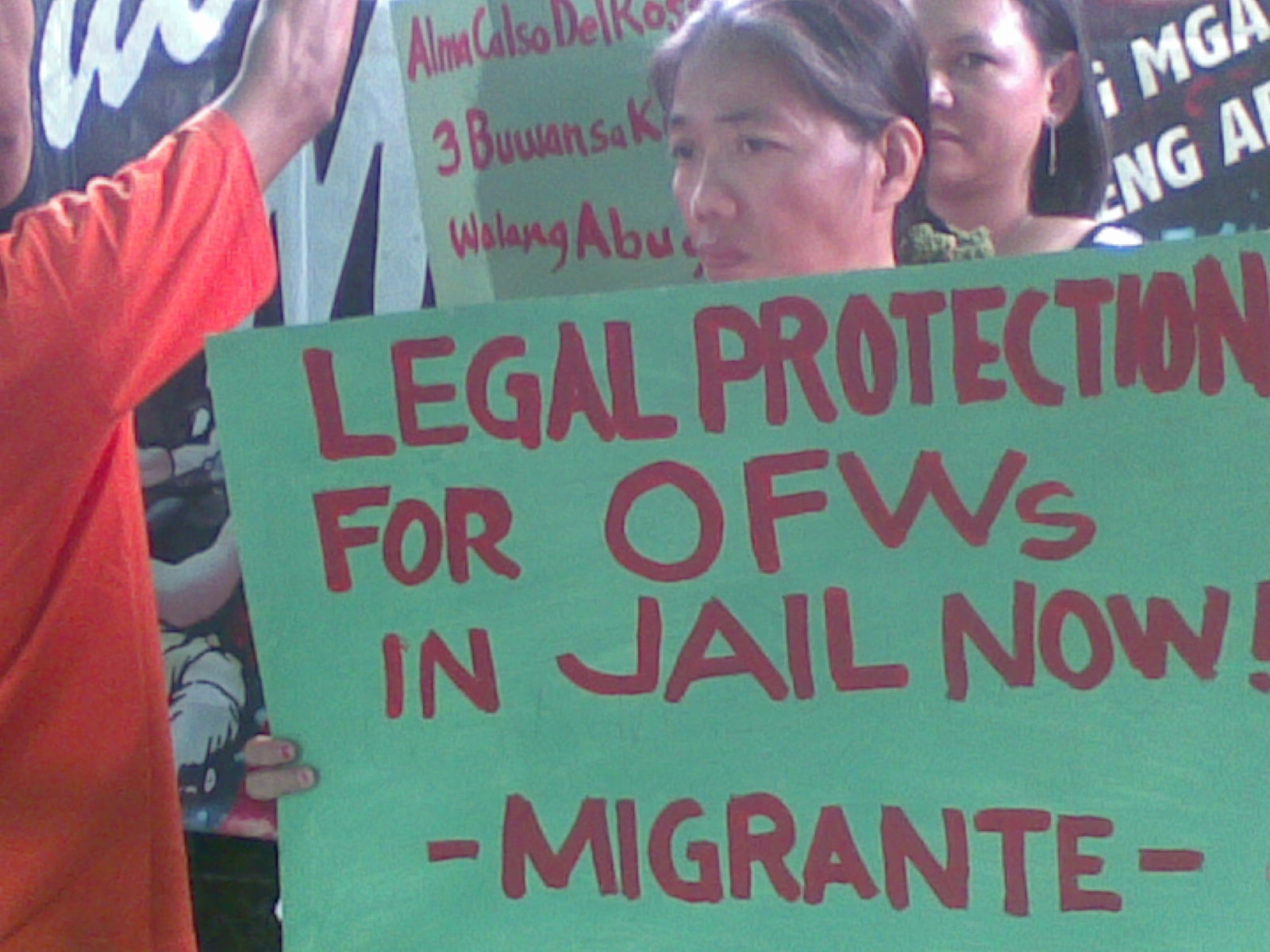 Nichelle, Mahilum’s younger sister, said prior to her sister’s arrest, she told her that she would have to “exit” from Thailand and go probably to Jakarta, Indonesia due to the violent protest actions at that time. “So we were surprised to hear from her that she was actually in Iran and worse, imprisoned.”

Desperate for information about her sister’s condition, Nichelle contacted Migrante International, an OFW group, to ask for their assistance in going to various government agencies. On their first visit to the Department of Foreign Affairs (DFA), however, Nichelle said they were told to return another day, saying that they still have to look into her case.

A few days later, she returned to DFA and was finally informed about what happened to her sister. Nichelle, at that time, was somehow optimistic that the government could help her sister to get out of jail because they were promised that Mahilum would be provided with a lawyer. Until press time, however, the Philippine government has not yet acted on Mahilum’s case.

In the span of eight months, Mahilum attended two hearings and was only provided with an interpreter, not a lawyer. Nichelle added that it was also only on January 4, 2011 that an embassy official visited her sister. “We heard that Iranian courts come up with their decision after three or four hearings,” she said, “I hope they would act quickly on this.” 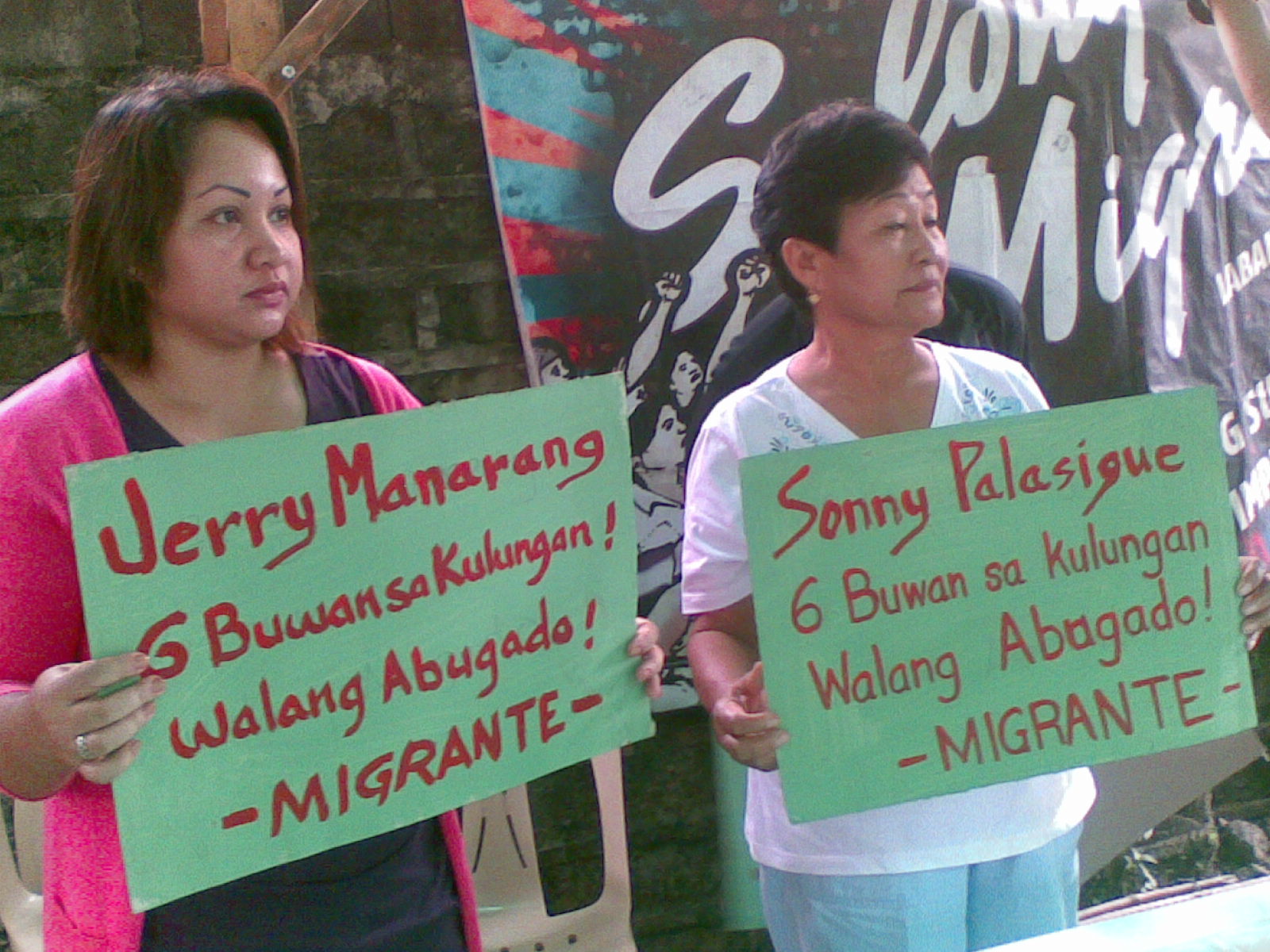 OFWs Gerry Manarang and Sonny Palasigue, who are jailed in Saudi Arabia, also did not receive legal assistance from the Philippine Embassy in Riyadh. Arlene, wife of Manarang, said the two were victims of a frame up. “Every person who pinpoints a drug carrier there is rewarded money amounting to 5,000 riyals,” she told Bulatlat.com.

Saudi police allegedly found .100 mg of heroine. “It was a very very small quantity,” Arlene said, adding that she believes that the evidence was planted. “My husband would not do such a thing. He has been working in Saudi Arabia for 14 years. He knows the laws and has not violated any ever since.”

Arlene was also working in Saudi Arabia when her husband and his friend Palasigue were arrested on July 30. She was, however, deported a few days after upon her supervisor’s advice, so that she would not be dragged into her husband’s case. Edwin, Manarang’s brother, an OFW in Saudi but was in the Philippines during the time of the arrest, followed up his brother’s case as soon as he returned to work.

However, Arlene said, Edwin was asked to write a waiver stipulating that in return for the embassy’s assistance to Manarang and Palasigue, their families back in the Philippines would not speak with any non-government agency or to the media. But more than six months has passed, Arlene said, her husband and Palasigue have not received any legal assistance yet.

Over the phone, Manarang told Bulatlat.com that they asked welfare officer Jerome Trias to attend their hearing but were told that the Philippine embassy does not have a budget for their transportation. “We asked for an interpreter and we were given none,” Manarang said, “We were meted out our sentence the same day.”

It was only in January or about six months since they were jailed, that Trias visited them. Manarang said the visit did not even take 30 minutes. “It was like he was only getting information from us. Perhaps he would write a report and make it appear that he is well-informed on what we are going through,” Manarang said, “He said that the embassy officials have already filed an appeal before Saudi’s high court.

Such injustice, Arlene said, pushed her to break the waiver and finally speak about what her husband is going through.

Medical assistance, too, is being denied from Manarang and Palasigue, who are suffering from tuberculosis and enlargement of the heart, respectively. When they told DFA’s Milet Flores about their husband’s health problems, “we were told that the jail has an in-house clinic for their medical needs.”

“Will you still wait for a person to die before you will give them due attention,” Arlene remembers telling Flores on one of their confrontations.

Emily, Palasigue’s wife, said she is afraid that her husband, who also has hypertension, might suffer a heart attack while in prison. “Our family has already been torn apart because we needed to sustain our daily living. And this is what we get in return?”

Maltreatment of OFWs in Malaz Central Jail in Saudi Arabia was also reported recently. Migrante Middle East coordinator John Monterona said he received text messages from Filipinos saying that they are being beaten up heavily inside the jail.

“I am one of those beaten up by the police last July 13. The incident was repeated yesterday (February 6). Each of us is being taken out of the cell to be beaten up. We no longer have rights to defend ourselves, we need your help and that of the embassy. We thank you and we will owe you a debt of gratitude if you could help us. God bless us,” Farouq Bayabao, one of OFW leaders in Malaz Jail told Monterona in a text message.

Monterona immediately wrote a letter to the Philippine embassy in Riyadh informing them that, “We are taking this allegation seriously especially if it came directly from the jailed OFWs themselves. If you could still remember the same information we have sent you last year about the complaints of OFW on death-row Joselito Zapanta –that he has been heavily beaten up and was not given food for a day or two.”

“Our OFWs are humans, though some may have breached local laws and prohibitions of the host government, nonetheless their rights should be protected and they deserve protection even if in jail,” Monterona said. There are currently an estimated 150 OFWs in the Malaz Central Jail.

Migrante International chairman Garry Martinez said the inept services of the government to OFWs who are in dire need of legal and medical assistance would worsen in the coming months as the effects of the budget cuts of President Benigno S. Aquino III on OFW funds becomes more apparent.

The fund for legal assistance for OFWs was slashed by half from $1.38 million last fiscal year to about $614,000 under Aquino’s supposed reform budget. Migrante International have earlier denounced this, saying that is a gross violation of Republic Act 10022 or the amended Migrant Workers Act, which mandates that there should be at least $2.27 million fund allotted to the Department of Foreign Affairs to cover repatriation costs, medical assistance and other services to OFWs in distress. The Assistance to Nationals fund of DFA, on the other hand, have been reduced to $1.98 million from $2.27 million.

Prior the budget cut, Martinez said, the government could only give services to not more than 15,000 OFWs per year. But with the drastic decrease of the budget allocated for them, about 7,000 might not be able to avail of government services.
“It is not an issue whether the Filipinos who are in jail are guilty or not,” Martinez said, “It is your responsibility to provide services to them,” who, according to Martinez, was forced to leave the country in the first place because there are no jobs that could provide for their daily needs in the country.

Martinez also denounced the waiver that was asked from Manarang and Palasigue, saying that it is a form of harassment. “Palasigue has already written to us. He said he should have never stopped from asking Migrante’s assistance because the Philippine embassy would not help them either way.”

Migrante International, the largest OFW group, urged the government to review its priority as 108 OFWs are in death row, 7,000 are in jails abroad and at least 10,000 are stranded and seeking repatriation in the Middle East alone.