“My happiness is not complete because two of the Morong 43 are still in jail and hundreds more political detainees are still suffering,” Edwin Dematera told Bulatlat shortly after he was released.

MANILA — One of the three remaining Morong 43 detainees, who was kept in jail on charges of rape and robbery filed against a supposed namesake, walked out of the Metro Manila District Jail in Camp Bagong Diwa, Taguig City, Feb. 17, around 8:00 p.m.

Edwin Dematera, 39, was released after complainants to a robbery case filed before a local court in Las Pinas confirmed that he is not Edwin Bustamante, the accused.

The Morong 43 refers to the 43 health workers arrested on Feb. 6, 2010 in Morong, Rizal. They were charged with illegal possession of firearms and explosives and were branded as members of the New People’s Army, armed wing of the Communist Party of the Philippines (CPP). On Dec. 17, 33 of the Morong 43 were released after the dismissal of charges against them by the local courts. Two more were released Dec. 28 and two others are still detained at Camp Bagong Diwa. The other five have remained under military custody at Camp Capinpin. 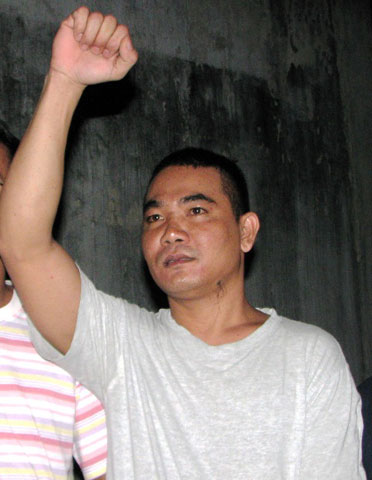 Dematera was kept in jail on charges against a supposed namesake. (Photo by Ronalyn V. Olea / bulatlat.com)

“My happiness is not complete because two of the Morong 43 are still in jail and hundreds more political detainees are still suffering,” Dematera told Bulatlat.com shortly after he was released.

Julius Garcia Matibag, national spokesman of the National Union of People’s Laywers (NUPL), said the two, Mario delos Reyes and Rogelio Villarisis have been slapped with non-bailable criminal charges, such as murder, in Mindoro. There are 345 political detainees all over the county, according to the Samahan ng Ex-Detainees Para sa Amnestiya at Laban sa Aresto (Selda).

Dematera was fetched by Matibag, Fr. Dionito Cabillas, Selda secretary general and two staff of Karapatan. Dematera’s wife and children are in Sorsogon, Bicol. His wife Lyn is expected to travel to Manila today, Feb. 18.

“I did not expect that I would be released today. I had prepared myself for longer detention,” Dematera said, adding that authorities insisted that he is the Edwin Bustamante charged with rape and robbery in Las Pinas local courts. Dematera said that although the criminal charges are bailable, he could not admit crimes he did not commit in the first place.

Earlier, the complainant to the rape case did not appear at a hearing called for by the local court in Las Pinas. The court said the problem of identity of the accused and the person in jail is a matter that should have been determined by his present jailer. Dematera’s lawyers showed proof that Dematera is not the same Edwin Bustamante. They said they could be compelled to file arbitrary detention and petition for habeas corpus if the jail warden refused to release Dematera. 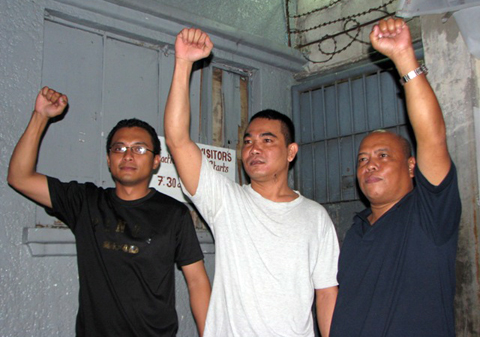 On Feb. 8, the robbery case against Edwin Bustamante surfaced. In an affidavit filed before the Las Pinas Regional Trial Court Branch 255, Dematera categorically denied he is the accused in the said case. On Feb. 10, complainants to the case confirmed to the branch sheriff that Dematera is not the Edwin Bustamante they are charging in court.

Asked what was most difficult during his detention, he said their detention prevented them from performing their work as community health workers.

Dematera thanked all those who supported the campaign for the release of the Morong 43. He said it is the Filipino masses, not President Benigno S. Aquino III, who was instrumental for their release.

Asked if he had any message to the military, Dematera said the Armed Forces of the Philippines (AFP) should stop extrajudicial killings, enforced disappearances and torture. He noted that under the Aquino administration, human rights violations remain unabated.

Dematera spent two birthdays in jail. The first one was at Camp Capinpin in Tanay, Rizal shortly after their arrest. “At that time, the interrogations were still intense,” he recalled. The Morong 43 were handcuffed and blindfolded for three days after their arrest. The fourth day, Feb. 10, was Dematera’s birthday.

Last week, he spent his birthday with his wife and seven other detainees inside Camp Bagong Diwa. They shared spaghetti and chicken. The best gift he received came seven days after—his freedom.

Dematera was treated to a sumptuous dinner by his colleagues in Selda and Karapatan to celebrate his release and his birthday. Like the rest of the political prisoners, he had been fasting since Feb. 15 as a form of protest.