You Are Here: Home → 2011 → February → 20 → OFWs Who Lived For Years Under a Bridge in Jeddah Return Home with Harrowing Tales of Neglect

“When we were still (in Saudi) the government did not help us. Now that we are home, they still could not extend any assistance to us.” – Lubaira Guiandal, 43, one of the OFWs who lived under the Khandara Bridge while awaiting repatriation.

MANILA — Outside Migrante International’s office in Cubao, Quezon City, 11 overseas Filipino workers were sharing their recent experiences to the group and to some church workers when, all of a sudden, one of them stood up and banged the table thrice, emphatically saying, “Nothing. Nothing. Nothing.”

The man was Arnulfo Manongdo, 42, a recently repatriated OFW who lived under the Khandara Bridge in Jeddah for six months. He was reenacting what Vice Consul Lorenzo Rhys Jungco did and said when they approached him and the Philippine consulate in Jeddah for assistance on their request for immediate repatriation.

Manongdo left to work as a maintenance crew for the Kimpahad Medical City on March 20, 2006. His principal agency, a  manpower services based in Saudi Arabia called Al-Safari, gave him the salary stipulated in the contract — 1,800 riyals — for the first three months. On the fourth month onward, however, Al-Safari refused to give them their salary unless they surrendered their iqama (residency permit). 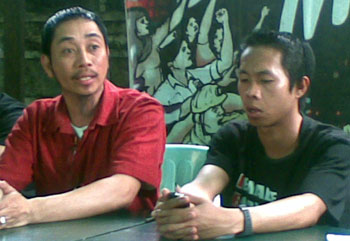 Arnulfo Manongdo (left) served as leader to the OFWs who lived under the Khandara Bridge for years while awaiting for repatriation. (Photo by Janess Ann J. Ellao / bulatlat.com)

He chose not surrender his iqama, while his co-workers who submitted theirs received a salary of only 450 riyals and a food allowance amounting to 200 riyals. Without a single riyal to survive, he worked on a part-time basis for other companies. But Manongdo eventually escaped from Al-Safari sometime in November 2006 after seeing that it would not change its policies regarding the workers’ salaries.

Manongdo managed to find different jobs, from being a cargo carrier to a restaurant crew. He could not, however, find a regular job. “We were paid for a month, then fired the next month,” he said, “I could hardly send money to my family.”

Click here to read more Bulatlat.com stories and multimedia content about the OFWs under the Khandara Bridge

A year later, Manongdo went to the Philippine consulate in Jeddah to “surrender” because he wanted to go home. “They drove me away, saying that I should just go look for a job.”

When his iqama finally expired in 2008, he still managed to land a job, but his employers would give him a meager salary. “They knew that we were up for any job and for any rate because we have nowhere else to go,” he said. “They also did not feel obliged to give us benefits, not even for hospital bills in case we meet an accident while at the work site.” 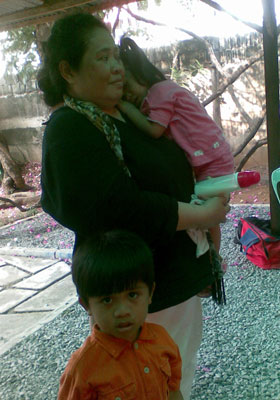 Farida Angkoy and her two children, who both grew up under the Khandara Bridge. (Photo by Janess Ann J. Ellao / bulatlat.com)

In October 2008, while working as a machine operator for Delta Water Company, Saudi Arabia’s biggest water distributor, Manongdo narrowly escaped death. He was able to duck to avoid a large metal beam, which was about to fall on his head. When he ran to a small tunnel for cover, however, he hit his head hard, resulting in a gaping wound on the right side of his forehead. Also, the middle finger on his left hand was almost completely sliced off when it brushed against something sharp.

Living Under the Bridge

With no other choice, Manongdo continued to work. He, together with other Filipinos, rented a small apartment. But in August 2010, the Kingdom of Saudi Arabia came up with a new law, stipulating that undocumented migrant workers only have until March 23, 2011, to go home to their respective countries. If not, they would have to pay a penalty of 10,000 riyals and would be imprisoned for a year or two.

Because of the new law, no employers dared to hire undocumented migrant workers because they, too, would be  penalized if caught. The owner of the apartment where Manongdo and other Filipinos lived also asked them to leave at once. With no place to go, he went again to the Philippine consulate to ask for help.

“I gave my name to the consulate so that just in case I got caught, Saudi officials would see that my papers were already being processed,” he said. But Manongdo said they were not offered a shelter. “(Embassy officials) told us that they would call for updates. They also gave me a hotline number. But they never answered my calls.”

On September 6, 2010, Manongdo had no other choice but to live under the Khandara Bridge where other undocumented Filipinos live, sleeping on cardboard boxes. There were, at that time, 329 Filipino migrant workers there, 130 men, 120 women and 79 children, with ages ranging from four months to 12 years old. Many of these children were practically raised under the bridge. 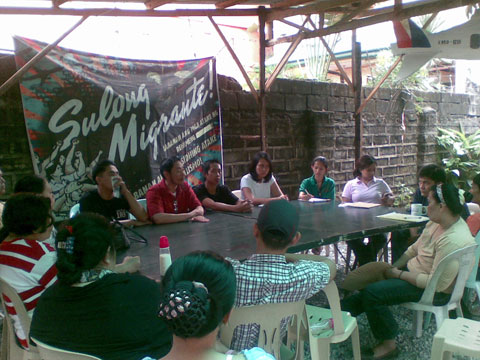 Farida Angkoy, 40, lived under the Khandara Bridge for more than five years, together with her husband and two children, aged two and five. She gave birth to her two children when they were already living under the bridge.

“It was very very hard,” Angkoy said, describing how it was to raise children with their dire living conditions under the bridge. She added that she feels so sorry that her children were always sick because they were directly exposed to the extreme weather conditions in Jeddah. The same goes, Angkoy said, to other children who grew up living under Khandara bridge.

Then, in January, a flood devastated Saudi Arabia. Flood water rushed toward them. Manangdo called up Vice Consul Jungco but they were never rescued. OFWs, who were literally stranded, had to endure three days standing on big boulders of rocks. “We could finally be venerated as heroes,” said Manongdo, attempting a joke. “We were like Jose Rizal,” referring to the national heroes’ statue in Rizal Park in Manila.