You Are Here: Home → 2011 → February → 22 → Dole Philippines Workers in Tough Fight as US Company Uses Military Force Vs Union

Today, Feb. 22, the workers at the largest plantation and cannery in the Philippines will hold a union election. The incumbent KMU-affiliated union, Amado-Kadena, is fighting to retain its dominance even as Dole Philippines uses a pro-management faction of the union against it while the US company, its allies and the military vilify and harass the union’s members and officers.

MANILA – “You have to suffer the consequences.”

Kevin Davis, at the time the boss in Dole Philippines (Dolefil), the largest integrated plantation and cannery in the Philippines, told Jose Teruel this in 2006 after the workers’ union Teruel headed successfully asserted its desire to affiliate with NAFLU, a labor federation of the progressive Kilusang Mayo Uno (KMU).

Davis made the threat following Dolefil management’s campaign to undermine the union’s choice of leaders as well as the labor federation it wanted to ally itself with, often using methods that were borrowed from the military.

The list of these “consequences” being suffered by the union, Amado Kadena-NAFLU-KMU (Asosasyon sa mga Mamumuo sa Dolefil Alang sa Kalingkawasan ug Demokrasya sa Nasud, or Association of Dolefil Workers for Freedom and Democracy ), and its leaders has grown longer as thousands of the multinational company’s workers embark yet again on another election, scheduled for today, February 22, in General Santos City,  to choose their union leaders.

Efforts by the Dolefil management to defeat Amado-Kadena are focused on two fronts: its support for a faction of the union called LEAD-PH and a parallel campaign to vilify Amado-Kadena as a communist group and to harass its officials and members.

The campaign against Amado-Kadena even entailed the assignment of a commander of the military unit covering Dolefil and its environments who is notorious for his anti-union activities in Central Luzon as well as his contribution to the military’s Oplan Bantay Laya counter-insurgency campaign. 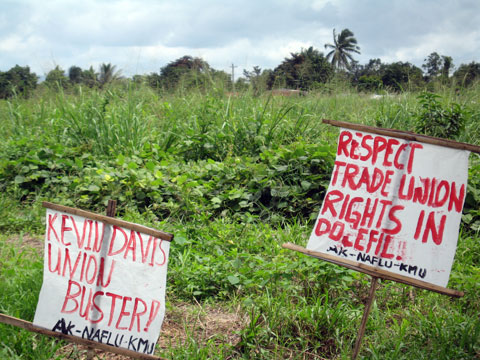 Workers belonging to the Amado-Kadena union have been denouncing the company’s efforts to undermine their group. (Photo courtesy of Jo Teruel / bulatlat.com)

In past interviews with Teruel, he told Bulatlat.com that the Dolefil management had tried “to corrupt” him and asked him to disaffiliate his group from the KMU. But the workers continued to support the union, especially after it successfully gained an improved collective bargaining agreement (CBA) in 2005 that improved the regular workers’ wages, on top of having succeeded in demanding the regularization of at least 1,500 contractual employees.

The majority of the Dole Philippines rank-and-file employees have been represented by Amado Kadena union since 2001, when they numbered 3,800 out of 6,000 regular employees. The total workforce actually was more than 14,000 at the time and this grew to 23,000 today as Dolefil added new product lines.

In 2006, Amado-Kadena successfully asserted to affiliate itself with KMU. Since then, the workers’ job condition improved slightly, and the union had promised to continue working for the regularization of 75 to 80 percent of the workforce who remained contractual or non-regular employees.

But Davis’s threat that Amado-Kadena would “suffer the consequences” hounded the union.

It meant nonstop military harassments and vilification, “frame-up charges” at work  and, since last year, an illegal takeover of the union by a company-supported set of union officers.

The military involvement in quelling the activities of Amado-Kadena had not escaped the attention of then Commission on Human Rights (CHR) chief Leila de Lima. Military harassments of active union leaders and members, she said before leaving the CHR to become justice secretary, are “definitely violative of the rights to associate, especially when combined with counter-insurgency.”

De Lima promised the labor sector that, “You can rest assured that my replacement (in CHR) will hold a dialogue with the Dolefil management about the reported military harassments.”

Reports that unionists are being harassed by soldiers because of their union activities struck de Lima as “generally highly questionable.” Under the law, she reiterated that the management should not be interfering with union affairs.

Military and Management Ganging Up on Progressive Unionists

But Amado-Kadena has repeatedly complained of management interference in union affairs in Dolefil. Teruel, for instance, had lamented that they had been “framed-up” through “random inspection” of lockers of mostly union officers, which for some reason yielded stainless steels and other items that they had no opportunity to handle while working. (Read Workers Slam Dole, the Fruit Company, for Anti-Union Moves).