You Are Here: Home → 2011 → February → 23 → Family of Slain Botanist Disappointed in Aquino For His Silence on Killing

“He has issued statements on matters like floods, the rising number of carnapping cases, environmental concerns, but he has yet to make a single comment on Leonard’s murder. Leonard has done much for the Philippines, but he was killed by soldiers. Why is President Aquino not saying anything?” said Bobby Austria, Co’s brother in-law.

MANILA — On the 100th day since the brutal killing of renowned botanist Professor Leonard Co, his brother in-law Bobby Austria could not help but express disappointment over the silence of President Benigno S. Aquino III on the issue.

“He has issued statements on matters like floods, the rising number of carnapping cases, environmental concerns, but he has yet to make a single comment on Leonard’s murder. We don’t understand why he can’t offer even a single word of condolence or comfort. The Philippine scientific community has already given tribute to Leonard and all his valuable contributions to the field of botany in the country, but President Aquino has said nothing. Leonard has done much for the Philippines, but he was killed by soldiers. Why is President Aquino not saying anything?” 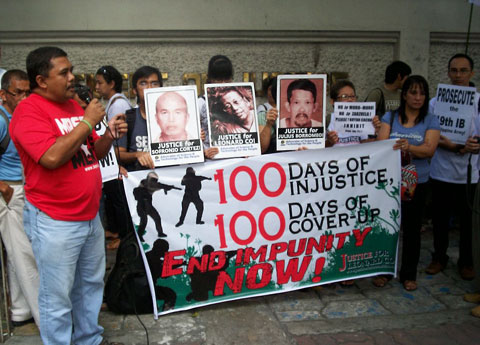 Family and supporters held a picket in front of the DOJ in Manila, Feb. 22, marking the 100th day since the killing of Leonard Co. (Photo by Ina Alleco R. Silverio)

Austria said the least President Aquino could do is to issue a statement supporting the family’s search for justice, urging agencies concerned to hasten the investigation. He said the family would welcome President Aquino’s help.

“If the president says the word, we, the entire family of Leonard Co will go to Malacañang, bringing native coffee, to hold a dialogue with him as to how we can all ensure justice for Leonard and all the victims of the Kananga Massacre,” he said.

Austria was with other members of the Co family during a picket led by the Justice for Leonard Co Movement in front of the Department of Justice (DOJ) along Padre Faura in Manila on February 22. Members of environment and church groups were also in attendance as they commemorated the 100 days marking the botanists’ murder. The groups assert that Co, forester Sofronio Cortez and guide Julio Borromeo were killed by members of the 19th Infantry Battalion of the Philippine Army in November 2010.

Co’s sister, Dr. Lily Co-Austria, wept over the DOJ’s “slow-paced” handling of the murder complaint against her brother’s killers.

“There is overwhelming evidence pointing to those who killed Leonard. This should be an open and shut case. It has been 100 days and we have been suffering the entire time,” she said. 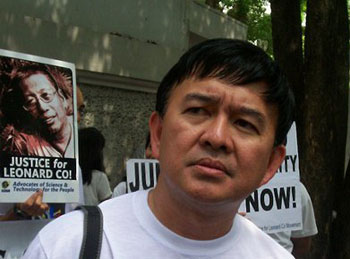 Bobby Austria, Co’s brother in-law, said the least Aquino could do is to issue a statement supporting the family’s search for justice. (Photo by Ina Alleco R. Silverio)

In the meantime, the Justice for Leonard Co movement co-convener Dr. Giovanni Tapang reiterated the call they previously made to DOJ secretary Leila de Lima for a speedy and impartial reinvestigation of the case. He said Secretary de Lima’s appointment of private prosecutor Brian Jacinto Cacha as part of the DOJ team to handle the preliminary investigations into the case does not serve the interest of justice.

Last January, a DOJ fact-finding panel, which included Cacha, issued a resolution absolving the military for the deaths of Co, Cortez and Borromeo. In its report that was released last Jan. 20, the DOJ panel cleared the military of any liability. It said that the ballistics tests of the National Bureau of Investigation (NBI) showed that none of the firearms submitted by the Philippine Army matched the bullets recovered from the bodies of the three victims. It also claimed that the trajectory of the bullets that killed Co, Cortez, and Borromeo came from lower ground where the NPA rebels were supposedly positioned.

“Cacha approved of the NBI’s erroneous findings. He signed the report. How can he now be trusted to be objective and unbiased? He cannot be part of the preliminary investigation on Professor Co’s case because he has already given his opinion and it was to support the military and the NBI’s reports that were obviously made-up to protect the perpetrators and white-wash the investigations,” Tapang said. 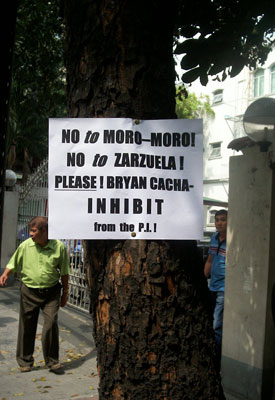 Dr. Tapang of the Justice for Leonard Co Movement said that the appointment of private prosecutor Brian Jacinto Cacha “does not serve the interest of justice.” (Photo by Ina Alleco R. Silverio / bulatlat.com)

Tapang said that during the ongoing hearings of the Commission of Human Rights on Co’s murder, Philippine National Police (PNP) Senior Supt. John Sosito said a police joint task force concluded that there was probable cause in the deaths and that there was no crossfire during the eventful date.

Sosito, PNP provincial director of Leyte at the time of the incident, said this was the gist of the report that they submitted to the the PNP Regional office of Region 8. Sosito had since then been reassigned to a PNP instruction and training division related to human rights. Sosito said during the hearings that the military probably mistook Co’s team of being an NPA unit.

“The military is clearly to blame for Professor Co’s killing as well as for the death of his two companions. The PNP joint task force cannot escape the physical evidence and the strong credible testimonies of the survivors. We hope that the ongoing investigations at the DOJ do not end up like its first report where the DOJ-NBI team ignored the very same facts and testimonies,” said Tapang.