‘Daet 4’ Released After Dismissal of Charges

Esmeraldo Bardon, one of the four detained activists, told Bulatlat.com that his incarceration made him more resolute in fighting for the interest of farmers and the Filipino people. “Although we were detained, our principles remain firm. Instead of being cowed in fear, the farmers vigorously campaigned for our release.”

MANILA — Four political prisoners walked out of the Camarines Norte Provincial Jail on February 24 after the last of the three criminal charges filed against them were dismissed.

The four were arrested in a raid by combined elements of the Camarines Norte Police and the 9th Infantry Division, 902nd Infantry Brigade of the Philippine Army at the office of progressive groups at F. Pimentel Avenue, Pasig, Barangay II, in Daet, Camarines Norte, around 8:00 a.m. on November 22, 2010.

Judge Roberto Escaro of Regional Trial Court Branch 38 in Daet, Camarines Norte, dismissed the charge of illegal possession of explosives against the four. Earlier, charges of rebellion and inciting to sedition filed against them were also dismissed.

In a phone interview with Bulatlat.com, Bardon said his incarceration made him more resolute in fighting for the interest of farmers and the Filipino people. 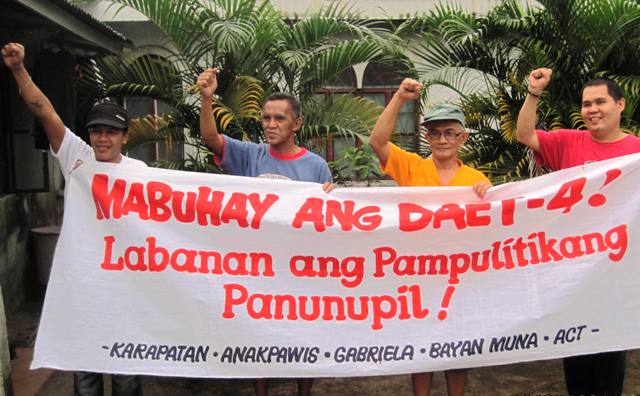 Bardon recounted how the soldiers and policemen raided their office on November 22. “They did not show us any warrant of arrest. They only presented to me a sheet of paper with the heading ‘Most Wanted Criminal’ and a vague photograph of someone I could not recognize. My name was written on it,” Bardon said.

“They are accusing us of being NPA [New People’s Army] recruiters,” Bardon said, adding that the raiding team took away their office supplies, personal belongings and cash amounting to P5,500. These items, he said, have not been returned. The explosives presented to the court were planted, according to Bardon.

In another phone interview, Maricel Delen, provincial coordinator of Karapatan, said the complainant to the case, the provincial police, did not file a motion for reconsideration upon the dismissal of the case. “They knew that the case would not prosper because the charges are fabricated,” Delen said.

Delen said a police officer, a certain Ma. Cecilia Zuniga, talked to their lawyer Santiago Ceneta and pleaded against the filing of counter charges against them. “Our lawyer told her to drop the case or testify in court. She admitted that the military pressured them to file the charges [against the activists],” Delen said.

Delen said Zuniga has recently been transferred to Masbate.

Bardon said their lawyer is preparing to file charges against the Armed Forces of the Philippines (AFP).

Bardon said they are happy to be free. “Although we were detained, our principles remain firm. Instead of being cowed in fear, the farmers vigorously campaigned for our release,” Bardon said in Filipino. He thanked the farmers, other sectors and allies who supported them.

Delen said the military is testing the waters by arresting the Daet 4. “They thought that the masses would be threatened but they are mistaken,” Delen said. “The four were never demoralized.”

A day after their release, Bardon and the three others joined the rally in Daet to commemorate the 25th anniversary of People Power I.

Bardon said there is no change under the Aquino government. “We can expect nothing from Aquino’s tuwid na daan (straight path). In fact, early on, his straight path became twisted.”

Bardon criticized the new counterinsurgency program Oplan Bayanihan as yet another tool “to deceive the Filipino people.” “The military wants to take part in the agrarian reform while engaging war against the peasants,” he said.

Delen said the people of Camarines Norte are ready to face any form of political repression under the Oplan Bayanihan.