Kabataan Partylist Rep. Raymond Palatino said there is an urgent need to control tuition and other fee increases and to promote the practice of democratic participation in the decision-making process. 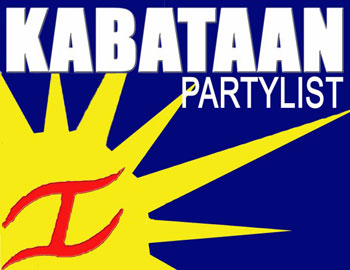 This is an assertion made by Kabataan Partylist Representative Raymond Palatino as he filed House Bill No. 4286 or the Tuition Regulation Act of 2011. Palatino said there was an urgent need to control tuition and other fee increases and, at the same time, empower students and parents by ensuring democratic consultations and decision-making processes.

In the measure, schools are ordered to effectively inform students, parents, teachers and non-teaching personnel of all intentions and proposals for tuition and other fee increases at least 30 days before the actual consultation. All tuition consultations shall be made before February 28.

“The deregulated character of tuition and other fees sadly finds basis in our existing laws and policies. That should be remedied with the creation of a new law that will strictly regulate tuition increases and allow students, parents and members of the academic community to have democratic participation in the decision-making process,” Palatino said. 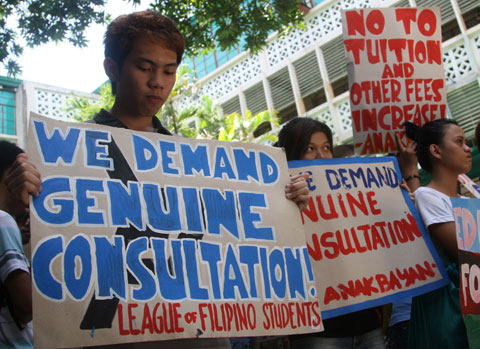 Kabataan Partylist filed House Bill 4286, penalizing schools that implement tuition hikes sans democratic consultations with students and parents. This photo was taken during a protest action by students of the University of Mindanao in Davao City, denouncing the brunt of the increasing cost of education in the country. (Photos by Karlos Manlupig / bulatlat.com)

Palatino said that every school opening, the constitutional guarantee that the government will make education at all levels accessible to all is sidelined because of left and right increases of tuition and other fees in schools, particularly in private colleges and universities.

“The unabated tuition and other fee increases have effectively transformed our schools as ripe venues for aggressive profit-making. Many rich and powerful business people have already ventured into owning schools, allowing them to rake in millions yearly. Despite their high earnings, yearly tuition and other fee increases are still imposed as schools reason out that more money is needed for operation expenses,” Palatino said.

College students in the NCR with a 21-unit load have to shell out P20,591 ($472) every semester, and this still excludes miscellaneous fees which, in many schools, are even higher than the actual tuition.

Palatino said this shocking case of annually increasing tuition rates are actually backed by laws and policies in the country’s education system. Primary among these laws is the Education Act of 1982 wherein it is actually stated, Section 42, that private schools can determine the rate of tuition and other school fees or charges.

“Of course there are cases when tuition hikes are needed, such as the case with schools that need to jack their fees so they won’t close operations; but this remains the exception rather than the rule,” he said.

Palatino said for the most part, private schools impose higher tuition and other fees despite their big earnings. This, he said, is being done without consultations with students, parents and other members of the academic community.

“The school process of deciding over tuition and other fee increase doesn’t normally include the practice of democratic consultation and decision-making process. In most cases, there are even no tuition consultations held in schools. Students and parents only know of the increases during enrollment or after school officials have already closed ranks on the issue. Forgoing tuition consultation processes in schools is warranted by the implicit rule that the decision of the school owners is conclusive and executory,” he explained.