MANILA — Guillermo “Ka Pons” Ponce de Leon was originally among the more than two thousand Martial Law victims “de-listed” from the US$1,000 compensation being distributed by American lawyer Rober Swift around the country.
Last Friday, the former detainee and torture victim (now retired University of the Philippines [UP] physics professor) made known his plight to Commission on Human Rights chairperson Loretta Ann Rosales and lawyer Rod Domingo and, just like that, he was able to pick up his cheque last March 7.

Along with fellow martial law victims UP professor Roland Simbulan and Dr Sylvia dela Paz, Ka Pons is among the few belatedly included among the recipients of the initial monetary compensation after directly informing Rosales of their predicament.

While other de-listed victims are happy for “Ka Pons” they trooped by the hundreds to the CHR offices in Quezon City March 7 to demand an explanation for what they call a “vicious twisting of history.” 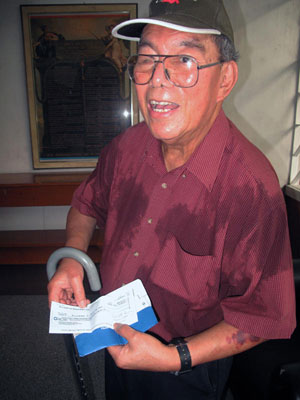 Multi-awarded playwright Bonifacio Ilagan, vice-chairperson of the group Samahan ng Ex-Detainees Laban sa Detensyon at Aresto (Selda), was among them. He was arrested and heavily tortured in 1973 and, a year later, his sister Rizalina was abducted and raped by state forces. Rizalina remains missing to this day.

“This is disheartening, more so that we did not receive any letter they claim to have sent us the previous years. There is something terribly wrong with their system (of determining who should receive compensation). It is as if they are taking away our status as human rights victims and, therefore, not entitled to justice or whatever indemnification we ought to receive,” Ilagan said.

Ilagan led others in submitting a petition to Rosales last Monday seeking an explanation to the delisting.
“This is absolutely unacceptable! It is as if many victims are no longer recognized as the people who sacrificed and offered so much during the Marcos years,” Ilagan added.

Other victims wanted to ask American laywer and cheque signatory Robert Swift who decided on the de-listing of more than two thousand victims. Swift and Domingo were both absent during the distribution of cheques at the CHR last Monday. 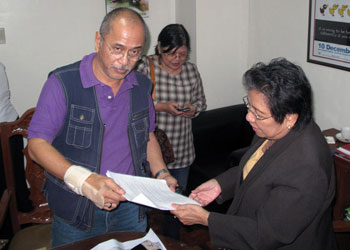 Writer Bonifacio Ilagan presents his group’s petition CHR chairperson Etta Rosales, demanding an explanation as to why others were delisted from the list of claimants. (Photo by Raymund Villanueva / bulatlat.com)

“Isn’t it that the most important proof here is that all of us here were victims of Martial Law?” former UP faculty regent Prof. Judy Taguiwalo, herself a former detainee, asked. “This is not a question of the monetary compensation; this is a question of recognition of the real victims,” she added.

She said that Swift and Domingo, in fact, want to expand the list. “There are (also) many variables…the flow (of communication), the postal system that we have that you can’t say for sure that you’d receive everything,” Rosales explained further.
She also reasoned that some claimants changed addresses while some even went abroad.
“Like Sylvia dela Paz—who went to the United States. She came to me and I took her case to ‘Bob’ (Swift).”

Rosales went on to downplay her role in “re-enlisting” the likes of Ka Pons, Simbulan and Dela Paz.

In response to the query if she can have cheques written for claimants as long as they go through her, she said “Let’s just say it helps if I get to talk to all these people,” she said. 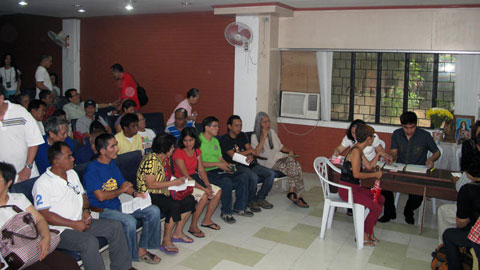 Martial law victims waiting for their checks at the CHR. (Photo by Raymund Villanueva / bulatlat.com)

She however could not categorically say she would be able to extend the same kind of help to the more than two thousand de-listed claimants.

Taguiwalo rues the way things are turning out for the Martial Law victims.
“We started this as a political issue, wanting to prove that there were thousands of victims during Martial Law. Now, they are turning the compensation issue into an economic one, and the lawyers have full control,” she said.
“What gave Swift the right to hold on to that list and give the final say on who were the victims and who were not during Martial Law?” Taguiwalo asked.