Bulatlat Cited for Its Coverage of Women’s Issues

MANILA – St. Scholastica’s College has given recognition to Bulatlat.com writer Anne Marxze Umil for her coverage of issues concerning women.

The Hildegarde Awards for Women in Media, now on its fifth year, is an annual event of the SSC’s Mass Communication Department that aims to celebrate women’s achievements in the mass media and other related fields. Among the past awardees are Genoveva Edroza Matute, Florangel Rosario Braid, Emily Abrera and Susan Fernandez.

The award is named after St. Hildegarde on Bingen of Germany, a celebrated Benedictine nun. Considered as a woman ahead of her time, St. Hildegarde was a counselor, linguist, naturalist, scientist, philosopher, physician, herbalist, poet, visionary and a composer.

This year, Umil was shortlisted and became one of the recipients of Hildegarde’s special citations for her reports on women issues from 2009 to 2010. The list of special citations were nominated and voted for by the school’s mass communication students. Umil received the award during a simple ceremony at St. Cecilia’s Hall in SSC’s Manila campus last March 5. 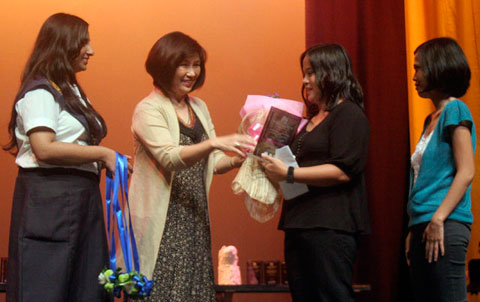 Umil said she is very thankful for SSC’s recognition of Bulatlat.com’s “contribution in the struggle for women and children’s rights.” She added that while most people assume that journalists should be “objective” in reporting, she proudly shared to the Scholastican community that she has “cried with the mothers, the women political prisoners and women victims of human rights violations.”

“Was I not being true to my craft as a journalist because I also felt the pain and sufferings of the women I interviewed?” Umil said in her brief speech. “Perhaps some would say so, but I believe that by feeling the pain and sufferings of the victims, I have become more effective in conveying to the readers what the women victims are going through and the need to do something about this.” 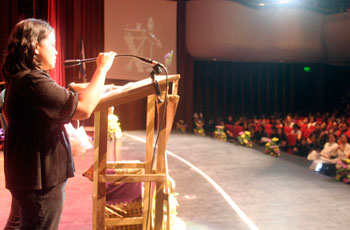 Umil added that the recognition came at the most appropriate time as Bulatlat.com is celebrating its 10th year anniversary.

Umil said that what makes Bulatlat.com’s report on women different from other news media is that, through its advocacy journalism, they knew and felt the “real situation of the people, the issues affecting them most, and their struggles to create a better life not only for themselves but for the Filipino people.” 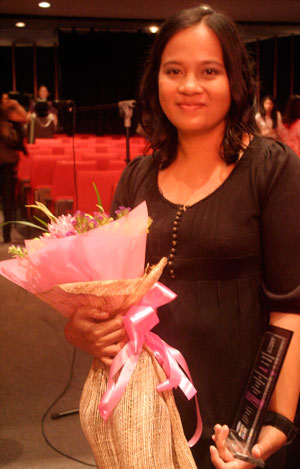 Aside from Umil, among other recipients of this year’s special citation for Hildegarde Awards are GMA 7’s Kapuso  Mo, Jessica Soho, TV5’s Ako Mismo, ABS-CBN’s Matanglawin and Dyan Castillejo, Gabriela Partylist’s Project Runaway and the Philippine Center for Investigative Journalism Cash Overload, Media Overdrive: the Press and the May 2010 elections.