40 Days After Deaths of Eton Workers, Families Reel from Loss

MANILA — Three-year old John Kirby said he knows what happened to his father . “Nahulog po siya,” he answered slightly lisping. Then he pointed to a building under construction. “Dyan siya nalaglag.”

John Birby’s father is Benbon Cristobal, 24, one of the 10 construction workers who were killed when a gondola crashed at the Eton Residences condominium project in Makati City last January 27.

“He said he understands but sometimes he still looks for his father,“ she said simply, in Filipino.

John Kirby, Lorraine and the loved ones and friends of the 10 victims were joined by support groups led by the Institute for Occupational Health, Safety and Development (IOHSAD) and the Ecumenical Institute for Labor Education and Research (EILER) in marking the 40th day of mourning after the accident in a candle-lighting ceremony at the site at Gallardo Street corner Paseo de Roxas in the heart of Ayala, Makati last March 4. 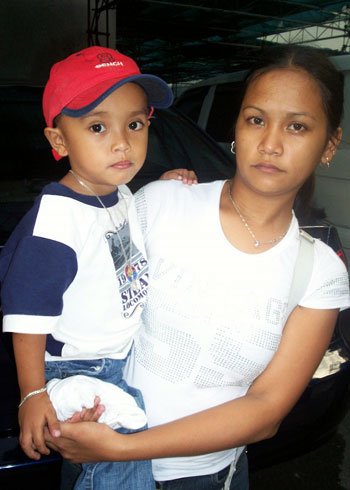 The network of supporters of the relatives also included the Center for Trade Union and Human Rights (CTUHR), Task Force Urban Conscientization-AMRSP, and Task Force for Organizing of Church Personnel (TFOP-AMRSP).

In her conversations with supporters, Lorraine said her husband used to work even on Sundays so he could bring home more money. She remembers a time when Benbon worked seven days a week for almost four months. He had been an employee of Eton Properties’ subcontractor Arlo Aluminum for nearly four years, but Benbon was nowhere near to being given regular worker status.

“Now that he is gone, I do not know how I could support our son. I do not have any work,“ she said.

Denied the Right to Pursue Justice

Now the families of the victims face another challenge in their quest for justice.

According to news reports, the Makati City Prosecutor’s Office has already recommended the dismissal of the cases lodged against five construction executives of project previously charged for the deaths of the 10 workers.

Assistant Prosecutor Wilhelmina Go-Macaraeg alleged that the families of the workers have filed affidavits of desistance indicating their loss of interest in pursuing the case. In reports to the media, Macaraeg said the families gave notarized affidavits of desistance stating that they are no longer interested in pursuing the case against the persons charged in the case.

The charges were filed after the police found negligence on the part of the construction executives that resulted in the deaths of the workers.

Anna Leah Escresa, EILER’s executive director, however, was quick to point out that the members of the families were deceived, forced to sign an affidavit they did not understand, a legal document that was not explained to them clearly.

Escresa said tthe families have received a lump sum of P150,000 ( $3,458) from the company, but the aggrieved relatives are saying that money is not enough. For one, the amount is too small, and the company has already said that its “assistance” ends after the cash has been given.

“You cannot put a price tag on lives,” Escresa said. “What the families want is justice for their relatives and guarantees that what happened in the Eton construction site would not happen again. We cannot just let Eton Properties and its contractors and subcontractors escape blame and accountability as families continue to mourn.”

Escresa pointed out that the victim’s families must be fully indemnified and not given just minimal financial assistance and scholarships. She asserted that the families did not sign anything willingly, and that they did not waive their rights to pursue justice against the company and its officials.

“Those responsible for the accident took more than ten 10 lives and permanently injured another. The victims and the lone survivor who still suffers painful physical injuries have families. The accident wrought extensive damage on the livelihood and well-being of workers’ families, and the effect is not measurable in the sense that it won’t only last a year, but a lifetime. Families should receive socio-psycho counseling and not just compensation – token cash,” she said.

“This is an issue of social justice, and an issue that has criminal implications. The families should not be denied their right to pursue justice and to demand it,” she said.

Most of the victims were very young and had they not been killed, could have lived long and productive lives.

Kevin Mabunga, for instance, was only 17 years old. His grandmother Paterna, said Kevin’s employment at the Eton site was his first and his last.

“He strived hard to work even if it is risky working in construction because he wanted to earn enough money to finish his studies and be able to help the family financially,“ she said in Filipino.

In the meantime, Escresa said the families and the support groups of the Eton 11 are determined to push the Department of Labor and Employment to look into the lingering labor and safety code violations in the Eton construction site. According to reports, even after the accident, construction workers in the Eton Residences project have still not been provided with necessary safety equipment. The company has also not complied with laws on minimum wages and the provision of legally-mandated benefits.