You Are Here: Home → 2011 → January → 28 → Deadly Eton Accident Opens Can of Worms About Abuse of Construction Workers

The 10 who fell to their death at Lucio Tan’s construction site were contractual workers. Subcontracting and labor-only contracting are a common practice in the construction industry, where workers are thoroughly exploited.

By MAUREEN A. HERMITANIO
Bulatlat.com

MANILA – The death yesterday of the 10 construction workers at the construction site of Eton Residences in Makati City could be regarded by some as a “freak accident” but is actually the result of the gross neglect of labor standards and workers’ rights, both by the employers and the Department of Labor and Employment (Dole).

The workers were installing glass windows on the 32nd floor when the gondola or construction elevator they were on gave way and sent them crashing to the seventh floor. Each of them was paid P260 a day to work at the dangerous construction site. 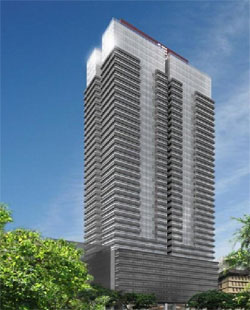 An artist rendering of the Eton Residences in Makati, where the fatal accident took place.

The work-related accident opened a can of worms about the operations of Eton Properties, one of the biggest real-estate developers in the country. It also reminded the public as well as authorities about the institutionalized violation of workers’ rights, labor standards and occupational health and safety regulations in the construction industry, considered by the International Labor Organization (ILO) as one of the most hazardous workplaces.

Subcontracting and labor-only contracting is a common practice in the construction industry. Manpower agencies provide work force for real-estate developers and contractors. Workers are hired based on the exploitative pakyaw and arawan employment scheme wherein workers are paid daily or weekly based on the project and their task in the construction.

Workers in this kind of exploitative contractual employment schemes receive lower wages. In the case of Eton, the subcontracted workers do not receive any benefits like those from the Social Security System, Pag-IBIG and PhilHealth.

Given the very dangerous nature of their work, construction workers don’t have any insurance or social security protection. Worse, they don’t even have an employer-employee relationship with developer Eton Properties, owned by tycoon Lucio Tan. According to Forbes Magazine, Tan is the second richest Filipino.

There are existing guidelines and standards on occupational health and safety of workers in the construction industry. Dole Department Order 13, series of 1998, sets the industry standards that must be followed but, obviously, there had been violations and negligence that led to the accident.

“It is certain that occupational health and safety standards and regulations were violated at the construction site,” said Anakpawis Rep. Rafael Mariano. Mariano said Eton, its labor contractors and the Dole must be held accountable for the accident.

“The accident could have been prevented if safety standards were strictly followed,” he added. 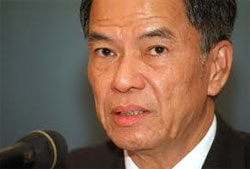 Rule 1080 of the Occupational Health and Safety Standards (OSHS) states that “every employer shall, at his own expense, furnish his workers with protective equipment for eyes, face, hands and feet, lifeline, safety belt/harness, protective shields and barriers whenever necessary by reason of the hazardous work process or environment, chemical or radiological or other mechanical irritants or hazards capable of causing injury or impairment in the function of any part of the body through absorption, inhalation or physical agent.”

Workers within construction sites are required to wear the necessary PPE at all times. Construction workers who are working from unguarded surfaces six meters or more above water or ground, temporary or permanent floor platform, scaffold or where they are exposed to the possibility of falling and hazardous to life or limb, must be provided with safety harnesses and life lines.

But under the contracting arrangements, the direct employer of the construction workers is the contractor, not Eton Properties. The question now is, who will be reprimanded and who will be accountable for the workers’ deaths?

This early, Eton claimed that it has nothing to do with the “freak accident.”

Rep. Mariano said the management of Eton Properties is equally liable for the accident. “We know Lucio Tan and how he treats his employees.”

He also pointed out that the Dole is also accountable because of its continued implementation of the voluntary compliance to labor standards.

“Instead of strictly ensuring that workers’ rights are protected and international labor standards are enforced in all industries, Dole allowed employers to conduct self-assessment.”

Under this so-called self-regulation, establishments with less than 200 workers are only required to fill-up and submit a checklist of labor standards compliance to Dole.

While conduct of inspection in workplaces with 10-199 workers is done by labor inspectors based on the following inspection priorities: existence of complaints, imminent danger or imminent; occurrence of accidents and illnesses/injuries; hazardous workplaces; construction sites; and establishments employing women and child workers.

A research by the Institute for Occupational Health and Safety Development (IOHSAD) revealed that in 2009, 26 workers in the construction sector died of work-related causes.

Construction also registered the most number of injured workers in that year, with 113 out of the total 427. The research also showed that the collapse of scaffolding is one of the main causes of workers’ deaths in the sector. 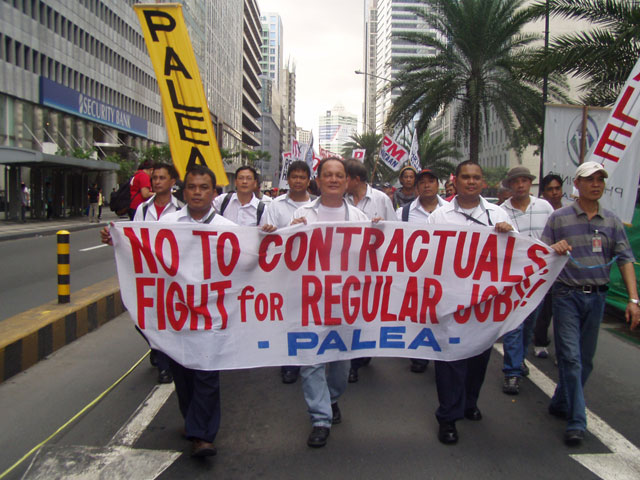 At the Philippine Airlines, another company owned by Tan, workers have been complaining against contractualization. (Photos by Angelica G. de Lara / bulatlat.com)

In the case of Eton, Dole only sent an inspection team at the site after the accident to determine what led to the death the workers and to extend assistance to the victims’ families.

Under the Labor Enforcement Action Program (LEAP) conducted from August to November 2010, Dole has inspected 5,697 establishments, covering 240,648 workers or 19 percent of its targeted 30,000 establishments. Inspection results reportedly yielded 53.68 percent compliance rate on minimum wage and 59.79 percent on other labor standards.

But, Mariano said, in many instances, labor inspections are announced, especially in economic zones and hazardous workplaces.

“The labor department issues notices of inspections giving employers time to prepare and hide the true state of working conditions at the workplace. Workers are even instructed not to talk to labor inspectors,” he added.

The congressman supported calls by labor groups to immediately revoke Dole Department Order 57-04 that promotes voluntary compliance to labor standards by all establishments and workplaces. “It is the government’s duty to enforce labor standards and protection of workers’ rights,” he said.