They were sexually harassed; they had no union; their pay never went above the minimum wage; and their 13th month pay was cut in half. When they formed a union, the management tried to undermine it. But everything turned out for the better when the workers, who are predominantly women, collectively staged protest actions from noise barrage, to work slowdown and finally a strike.

MANILA – Not long ago, women workers of a footwear factory were sexually harassed almost daily by the company owner. They had no union and received salaries below the minimum wage set by the law.

Now, these women workers are no longer terrified. They, who comprised 85 percent of the workers of the Bleustar Manufacturing and Marketing Corporation (BMMC), fought several attempts by the management at union busting and other unfair labor practices. BMMC is the maker of Advan boots and shoes with a factory inside the RMT compound in Muntinlupa City.

On March 8, members of the Bleustar Workers Labor Union (BWLU) proudly marched alongside other women in commemoration of the centennial of the International Women’s Day. They have all the reasons to celebrate.

The women workers have learned that collective action is the key to achieving success in their struggle for economic and political rights.

How did they manage to get out of their miserable conditions? It did not happen overnight.

In an interview with Bulatlat.com, Gloria Bongon, president of the BWLU, said they made three failed attempts before they finally succeeded in forming a union.

On their fourth attempt, Bongon said they sought out the assistance of a labor center that genuinely advances the interest and welfare of workers and found the Kilusang Mayo Uno (KMU or May 1st movement). “We used to be an independent union until we found KMU,” Bongon said. 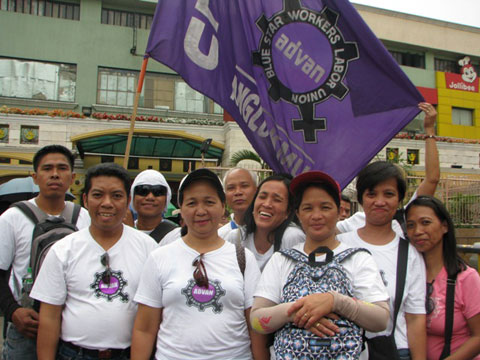 They started organizing among themselves, starting off with the issues of sexual harassment and low pay. In October 2007, the workers finally registered the BWLU with the Bureau of Labor Relations of the Department of Labor and Employment (DOLE-BLR). As expected, the management did not welcome it.

When the management tried to bring out the machines and other equipment from the factory, the workers blocked the gates. Forty-three workers, all members of the union, involved in the blockade were dismissed. The workers went on strike in August 2008. For 73 days, rain or shine, they held on to their strike. Finally, on Sept. 22, 2008, victory came. The National Labor Relations Commission (NLRC) ordered the reinstatement of all dismissed workers without conditions; the payment of unpaid salaries; and, recognition of the union, among others.

The decision also stated that the management and the union should jointly set up a committee to handle cases of sexual harassment. Under the Republic Act 7877 or the Anti-Sexual Harassment Law, a Committee of Decorum and Investigation must be in place to investigate and address complaints of sexual harassment.

Bongon related that after that, their next battle came with the negotiations for a Collective Bargaining Agreement (CBA). A CBA is a negotiated contract between a union and the management regarding wage increases, benefits and other labor issues.

The negotiations for the CBA of the BWLU and the management should have started in March 2009. By the first week of February, the union already sent their proposal to the management but the latter, instead of responding to the proposal, demanded that the union produce a Certificate as Sole and Exclusive Bargaining Agent (CEBA). The action, said Bongon, was tantamount to non-recognition of the BWLU as the sole bargaining agent of the workers and an attempt to avoid the signing of a CBA.