Why, they asked, are they being made to suffer human rights violations, when they have only been working for the indigenous farmers, laborers, small-scale miners and urban poor and, in the process, traveling long hours to reach far-flung villages, some of which could only be reached on foot?

BAGUIO CITY – Health workers in the Cordillera who have been serving many Igorot tribes amid threats to their safety and lives spoke out recently in a press conference about the harassments they have to face, and the health problems they have been helping to solve.

Three health workers from the Community Health Education, Services and Training in the Cordillera Region (Chestcore) shared harrowing stories of threats and harassment.

Milagros Ao-wat, 57, married with three children, administrative officer and program desk coordinator of Chestcore, got several death threats via cellphone text messages. On December 29, she received six such messages from two different numbers. The person sending the text messages appeared to be an old acquaintance of Ao-wat’s.

Aside from text messages, a stalker has been visiting the Ao-wat residence and even tailed her for several days.

Like Ao-wat, Dacanay has also noticed that a driver of a vehicle tailing her stared at her hard. The car with the driver inside parks where Dacanay parks her car.

A younger staff, Rosalinda Suyam, 27, single, Chestcore’s advocacy worker, got many threatening cellphone text messages. Her stalker tailed her to as far as the Lung Center in Quezon City, when Suyam took a patient there for further health checkup. 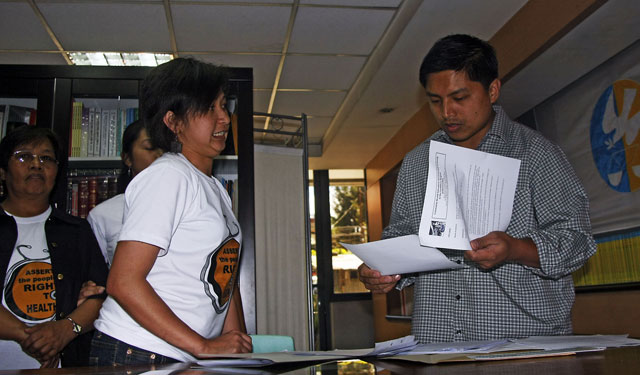 Members of Chestcore file complaints against the military before the Commission on Human Rights Cordillera Autonomous Region office. (Photo by Artemio Dumlao / bulatlat.com)

Their tales of being under surveillance do not yet approximate the torture and detention of the Morong 43 in the hands of soldiers, but according to the three health workers, they are already gravely affected. And to think, their supporters noted, that these health workers have literally traversed the Cordillera mountain region just to deliver the needed health services that the government could not deliver.

Why, they asked, are they being made to suffer human rights violations, when they have only been working for the indigenous farmers, laborers, small-scale miners and urban poor and, in the process, travel long hours to reach far-flung villages, some of which could only be reached on foot?

In a statement, Chestcore said, “With the implementation of the AFP’s Oplan Bantay Laya, many community workers like us became victims of extrajudicial killings (EJKs). In most cases, the victims of EJKs were first labelled as communists and/or NPA sympathizers and then subjected to intensifying surveillance and finally, direct threats. Even as the AFP recently announced in its new Internal Peace and Security Plan (IPSP) Bayanihan that they will adhere to Human Rights/ International Humanitarian Law and the rule of law, we fear that there are no guarantees that this pattern of red-labeling, surveillance, harassment and EJKs will stop.”

While on fieldwork, Chestcore staff have reportedly been subjected to various harassment by members of the Armed Forces of the Philippines, Philippine National Police, Civilian Armed Forces Geographical Unit and other paramilitary forces. The health workers were questioned for working in far-flung barrios. The health workers said the military seems to imply that they have ties to, if they are not members themselves, of the New People’s Army (NPA). The military further implies that they are teaching health workers how to care for the gunshot wounds of the NPA.

According to Chestcore, the soldiers operating in the areas where they are conducting trainings among local health workers insist on joining the health-care learning sessions, intimidating the locals as they butt in during the discussions.

The Chestcore said they are standing up in behalf of the hundreds of community health workers it has trained and who courageously continue to render health services in their respective barrios. “We stand firm with doctors, consultants and specialists who generously treat patients referred to them by the community health workers,” said the Chestcore.

“We speak out, as well, in behalf of our network of student volunteers who accompany us on fieldwork during their semestral or summer breaks,” add Chestcore.

The group reminds the media about the villages such as Gawaan, in Balbalan, Kalinga, or Sitio Liglig, in Tanglag, Lubuagan and Apatan, Pinukpuk, also in Kalinga. They said that in these areas in Kalinga, their colleagues usually conduct health trainings and render health services. But these are also the areas where they go through the proverbial eye of the needle just to deliver services to Igorot communities.

Like many other communities in the Cordillera, the locals here have suffered centuries of marginalization and discrimination. Even today Cordillera villages continue to suffer the highest poverty and malnutrition rates in the entire country, said the health workers.

“The Philippine government’s meager budget for health fails to deliver even such basic health services as immunization and anti-tuberculosis medications to far-flung barrios. Now the people’s health and livelihood are being endangered further by the encroachment of large-scale mining operations and commercialized agricultural production,” according to Chestcore. These mining operations and agricultural production are largely the activities that the state soldiers have also been reportedly protecting or guarding.