Impeachment of Ombudsman Gutierrez, A Victory for the People

Bayan Muna Rep. Neri Colmenares said the struggle to impeach Ombudsman Merceditas Gutierrez was waged not only inside the House of Representatives but was also waged by the people outside the halls of Congress.

MANILA — After several hours of debate lasting until past midnight, members of the House of Representatives approved the impeachment complaint against Ombudsman Merceditas N. Gutierrez. With a vote of 210-47 in favor of House Resolution 1089, the impeachment case against Gutierrez would now be tried by the Senate.

Six grounds were cited in the articles of impeachment. These are: failing to act promptly on the complaints filed and failing to file appropriate charges in court against high ranking government officials involved in the anomalous $16 million fertilizer scam; failing to file appropriate charges in court against Philippine National Police (PNP) comptroller P/Dir. Eliseo Dela Paz – dubbed as the Euro Generals, the PNP generals who were caught by Russian authorities carrying large sums of dollars – despite the latter’s admission under oath of a criminal offense and the findings of criminal liability by various government bodies; absolving from any criminal liability Commission on Elections (Comelec) officials and private individuals involved in the anomalous billion-peso contract for the automation of the 2004 elections known as the Mega-Pacific deal; for excluding former president Gloria Macapagal Arroyo from being included in the investigation of and absolving her husband Jose Miguel Arroyo from criminal prosecution in the NBN-ZTE broadband contract; failing to act promptly and absolving Philippine Navy officers and personnel implicated in the death of Navy Ensign Philip Andre Pestaño; and low conviction record manifesting a level of incompetence and inefficiency amounting to dereliction of duty. 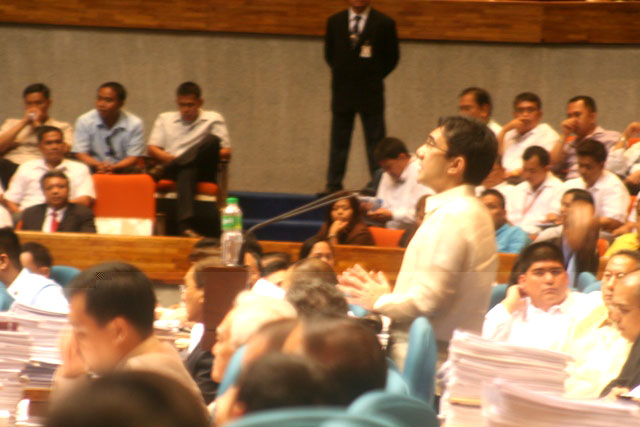 Rep. Neil Tupas was grilled for about hours in the Congressmen’s interpellation until Iloilo Rep. Augusto Syjuco’s turn who only did personal attacks against Tupas. Rep. Rodolfo Fariñas took over Tupas. (Photo by Anne Marxze D. Umil / bulatlat.com)

“Now I can say that I am a proud member of Congress. Tonight we stand by our mandate to hold the Ombudsman accountable to the people. We have gone through a difficult process. We know the Ombudsman has many friends inside and outside Congress. But at the end of the day the members of the Lower House weighed the circumstances that led to the impeachment of Gutierrez,”

Before the voting, seven members of the House were given an opportunity to interpellate the sponsor of the House Resolution. The interpellation, questioning the allegations in the articles of impeachment, by the seven representatives lasted for a maximum of one hour each.

Rep. Niel C. Tupas, chairman of the justice committee, said during his presentation of House Resolution 1089 that the committee report was a product of a complete impeachment proceedings, and “a first in our nation’s history.”

“For the first time in Philippine history, the Congress performed this task,” said justice committee vice chairman Rodolfo C. Farñas during his sponsorship speech. He said the people would revolt if the Congress did not perform its duty. This is the first time in history that an Ombudsman was impeached by the House of Representatives.

He added that the impeachment has gone through a long process and to give due process to the Ombudsman he called on his colleagues to vote for the impeachment of one of the most powerful government official. “She said she is ready to face the Senate. Let’s bring it on! Let’s bring the struggle in the Senate.”

Victory of the People

Members of the organizations that signed as petitioners in the impeachment compliant from Bagong Alyansang Makabayan (Bayan), Courage, Kilusang Magbubukid ng Pilipinas (KMP) and National Union of Student in the Philippines (NUSP) attended the plenary and patiently waited for eight hours until the voting.

In an interview with Bulatlat, KMP secretary general Danilo Ramos said the impeachment of Gutierrez is an initial victory for the people and also the farmers. Ramos is a witness to the $16 million Fertilizer Scam.

“We have long been clamoring for justice. Six years have passed since the filing of the complaint against Gloria Macapagal Arroyo and Jocelyn “Joc-Joc” Bolante for their involvement in the fertilizer scam and justice has not yet been achieved. We dedicate this victory to missing and killed farmers Nilo Arado and Ofelia Rodriguez.”

Bayan Muna Rep. Neri Colmenares said the struggle to impeach Gutierrez was waged not only inside the House of Representatives but was also waged by the people outside the halls of Congress. 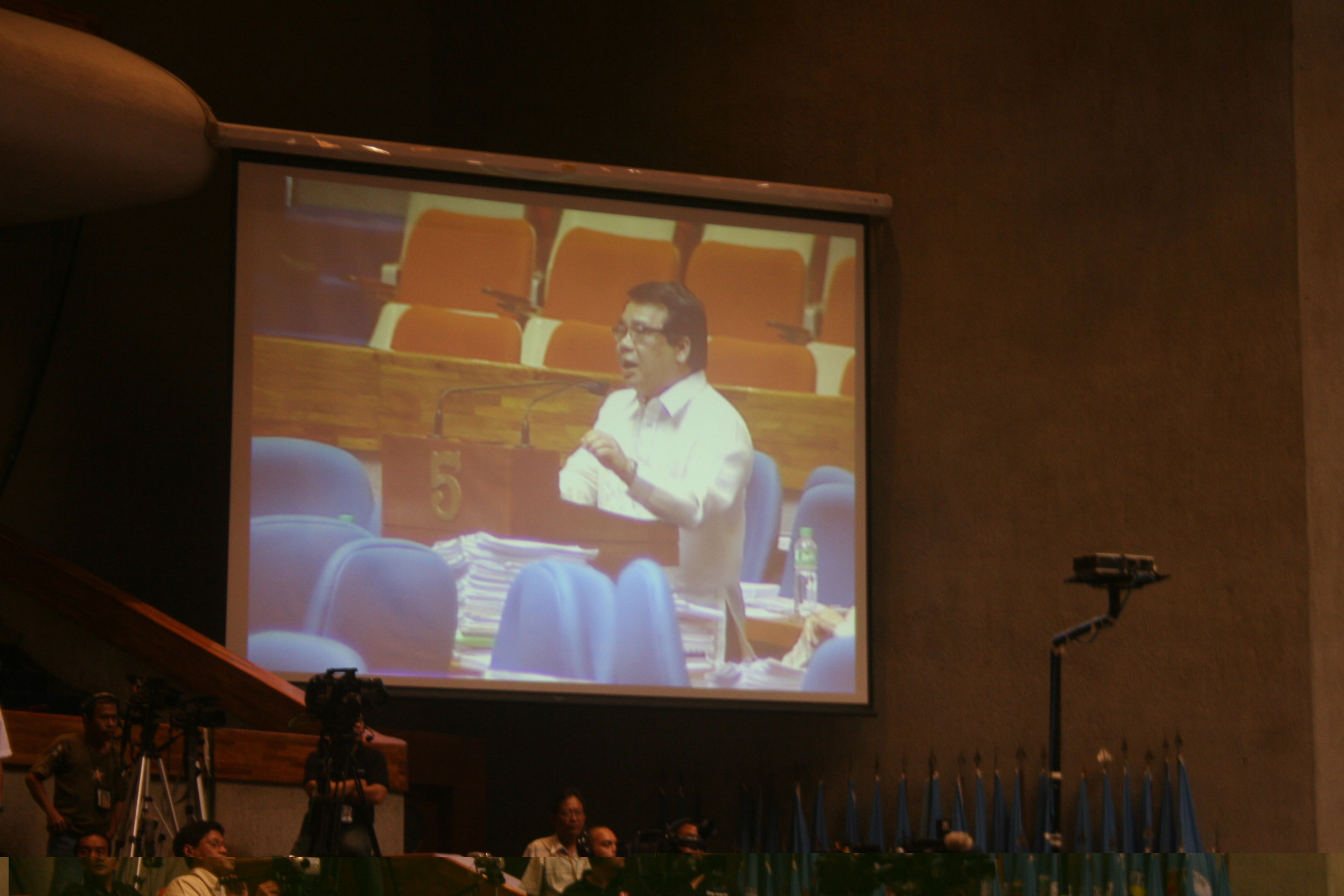 In his explanation of vote, Colmenares said the voice of the people was heard and upheld by Congress. “The corruption that happened during Arroyo’s term was worth a billion pesos. And every peso used for corruption is a peso that was lost for the people’s social services, medicines, school and food,” Colmenares said. “The issue of corruption affects all of us. One vendor cannot say that she has nothing to do with Gutierrez’s impeachment. Because the truth is, the people are involved in the impeachment because it is the people’s money – the tax money that was used in the corruption cases that Gutierrez just ignored.”

In an interview, Ferdinand Gaite, national president of Courage, also said the support of the people is also important to the struggle to impeach Gutierrez. “It was proven even before that justice could only be achieved through the collective action of the people. The struggle inside the House of Representatives is only one form of struggle.”

Gaite said Gutierrez’s impeachment is important to achieve justice. He said the impeachment is crucial also to prosecute Arroyo and her cohorts. He said that none among the three cases that Bayan et al filed in the Ombudsman reached the Sandiganbayan for prosecution.

The Sandiganbayan is a special court tasked with hearing cases of graft and corrupt practices committed by public officials.

Colmenares also said Guttierez is a hindrance in Arroyo’s prosecution not only during the latter’s administration but up to now. “If she would be impeached it would be a big blow to Arroyo’s defense system because the Ombudsman is only one component of her defense system.”

Meanwhile, in a statement, Bayan secretary general Renato Reyes said they are one step closer to impeaching the Ombudsman and in holding Arroyo accountable. “We are ever more determined to see this through to its logical conclusion in the Senate. We look forward to facing off with Merci [Guttierez] in the Senate.” ??Reyes added that more details of Arroyo’s scams and the Ombudsman’s inaction would surface.