You Are Here: Home → 2011 → April → 1 → Government Employees Call on Aquino to Go After Corrupt GSIS execs

Even as rank and file government employees get migraines trying to find means to stretch their salaries to cover their families’ basic needs, executives of the Government Social Insurance Service (GSIS) are said to have pocketed millions from the pension fund.

The national labor center of government employees Confederation for Unity, Recognition and Advancement of Government Employees (COURAGE) is calling for the prosecution of GSIS officials alleged to have pilfered millions from the GSIS. The group said President Benigno Aquino III has not carried out his promise that he will fight corruption in government because he has yet to lift a finger to go after the executives of the previous administration under Gloria Macapagal-Arroyo who were accused of graft. 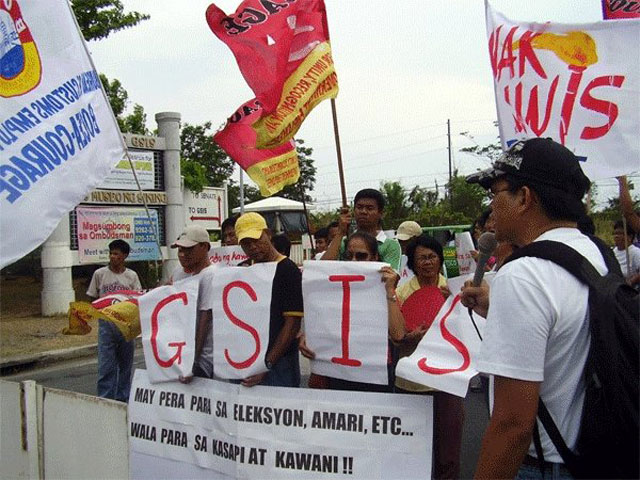 COURAGE president Ferdinand Gaite says the government must exhaust all possible measures to compel them to return the money that they stole from the GSIS funds. (Photo by Ina Alleco R. Silverio / bulatlat.com)

The group’s call came at the heels of the Commission on Audit’s (CoA) executive audit which exposed in detail the how executives of the GSIS utilized the fund through unnecessary and excessive spending. Said funds were rightly meant for the retirement and other benefits of GSIS members and pensioners. Courage National President Ferdinand Gaite said that based on the CoA report, the GSIS board of trustees received an P88 million compensation package as well as P80,000 (US$1,860)in honoraria for attending board meetings.

“It’s shocking that they received all that money apart form the numerous perks and benefits that they enjoyed. We are completely scandalized and outraged over the GSIS’ unconscionable spending of our hard-earned money for their own benefit. These executives did this in midst of an economic crisis — GSIS funds could have been used to augment the meager salaries of government employees and supplement our almost non-existent benefits,” he said.

According to the CoA, the GSIS also spent P135.5 million (US$31,395) for ads and public relations activities in 2009. Gaite said these expenditures are unjustifiable. “The clients of GSIS are already captive markets. Even for casual employees, GSIS membership is mandatory. Government employees are required to pay premiums, and logically, they can also apply for loans and the GSIS did not and does not have to announce that through an expensive advertising campaign,” he pointed out.

The biggest percentage of GSIS funds comes from the pension fund members contribute to through their premiums, and the interest earned from loans.

Further details of the CoA report were also damning. The audit agency reported that the GSIS board of directors comprised of eight members appropriated and received for themselves a compensation package of P88 million(US$20,465) in 2009. Breaking down the amount means that each director pocketed a whopping P11 million (US$ 25,581)each.

Base on reports, GSIS directors also receive 13th and 15th month pay. As of 2009, they also secured a 45 percent share in the Provident Fund amounting to P293,651. (US$6,829) Every month, each board member received that share as well as an incentive bonus of four months amounting to P2.6 million (US$ 604,651) Not content, they also declared themselves entitled to productivity and incentive bonuses for four months.

The CoA questioned the issuance of the productivity and incentive bonuses saying that the members of the board of directors are not eligible because “they are not organic personnel and do not contribute to the GSIS.”

According to the CoA reports, the payroll covering the compensation package of GSIS officials were made confidential in 2008, which was why reports on the board directors’ salaries were not validated earlier. The audit agency said the GSIS “had no basis” for treating these expenses as confidential.

“The GSIS management’s interpretation of the charter, giving themselves absolute power to set their compensation, gave it the leverage to increase, grant and approve allowances and benefits for themselves “without regard to existing laws, rules and regulations,” it said.

“But what did they do? The GSIS bigwigs took our hard-earned money and used it to fuel their excessive lifestyles while the average government employee struggled to survive the rising costs of basic commodities and services,” he said.

The CoA itself said in its report that “the GSIS had tried to hide the amount of compensation its officials and directors were receiving by making the records confidential, especially when the benefits appeared to be excessive or unconscionable.” It said that the board of trustees’ multi-million compensation package should by all means be “considered an excessive spending of the pension fund, which could have been utilized on programs to increase benefits of GSIS members.”

In its report, the CoA also questioned these using as the basis for computing the amount of these various benefits the monthly salary of the GSIS president and general manager, pegged at P652,558 (US$1,517). It said the proper basis for computation should be the directors’ per diem, which amounts to P2,500 (US$58) but should not be more that P10,000 (US$232)monthly for each board meeting.

The labor leader issued a challenge to the Aquino administration to immediately go after GSIS officials who were behind the GSIS fund misappropriations. “The government must exhaust all possible measures to compel them to return the money that they stole from our funds,” Gaite demanded.

The audit agency in its report recommended the suspension of allowances and benefits, which were in violation of existing regulations, It also said that the board directors should refund all disallowed benefits.

Winston Garcia Still with the GSIS?

The protests against the GSIS are not only taking place in the National Capital Region, but also in other regions. Leaders of Courage Negros Occidental Chapter have already filed their complaints before the GSIS chairman and former Negros Occidental Governor Daniel Bitay Lacson.

Courage said that while Garcia is still with GSIS, he will protect the anomalous policies that the previous Macapagal-Arroyo administration implemented and continue their anti-employees/anti-member policies.
“ If Garcia is still there, he has opportunity to cover up or clean his alleged mess or record of anomalies,” Courage-Negros Occidental officials said.

The government employees also called on Lacson to abolish the premium-based or CLIP policy (Claims and Loans Inter-auto Dependency Program) which they said prohibits members from availing of other loans if they have other standing loan balances.

They said the new GSIS administration should restore all survivorship claims and other welfare benefits due for active members, retirees and survivors, or pension that Garcia has dissolved.

According to reports, members who have been in service for at least three years were previously entitled to some benefits, but Garcia laid down that the time requirement be stretched to 15 years. In a recent report, GSIS’ Lacson said that policy is already being reviewed. “It is one of our most unpopular policies,” he admitted.

According to Republic Act No. 8291, or the GSIS Charter, a government employee’s benefits is computed based on period of service.