MANILA –The March 31 nationwide People’s Protests against oil overpricing pushed through as scheduled last Friday, despite government efforts to quell the protests through threats of franchise cancellations and possible use of police force, as well as through misrepresentation of the nationwide protests as a “transport strike”, which was duly reported by some media and followed up with belittling of the actual protests as “downgraded” or “failed”.

The organizers of the nationwide protests had been clear that the protests would include a transport caravan and rallies in specified areas in the Philippines, and they delineated as well where in the country there would be transport strikes. (See related story: Transport Caravan and Transport Strikes, “Just For Starters”) But the government deployed free rides and thousands of police in Metro Manila. On the day of the protests, MMDA chairman Francis Tolentino even rode a chopper with a TV network reporter to watch the transport caravan in Manila and announced afterward that the protests, “no matter how these were called, are the same as transport strike”. He then went on to say that the protests, based on his definition, had “failed.” 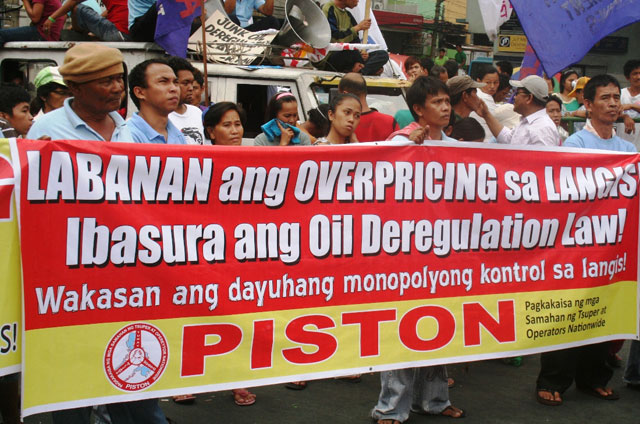 “This is exactly the kind of militaristic attitude that only wants to silence the people’s dissent, but never addresses the grumbling of the people’s stomachs,” said Einstein Recedes, National President of the National Union of Students of the Philippines in a statement.

Whichever way the government agencies interpreted the Thursday nationwide protests against oil price increases, the Aquino government was still prodded to sign that day a Department of Energy-proposed package of subsidies specifically aimed to appease the public transport sector “with legitimate franchises”. Earlier announcement placed the amount of transport subsidies at P600-million ($13.8 million), to be sourced from the EVAT on oil.

It would have been simpler and more beneficial to everyone if the government would just scrap the EVAT on oil, George San Mateo, secretary-general of Piston, told Bulatlat.com. This way, he said, both the public utility drivers and the private motorists would benefit. And the gains would amount to more than P4 billion ($92 million) – the estimated first quarter EVAT on oil – rather than just P600 million or even less as offered by the Aquino government.

San Mateo described the newly approved subsidy as an indication of the impact of their nationwide protests, but he said that aside from the fact that it is very short-term and limited in scope, “it will not really solve the problems caused by oil overpricing.”