You Are Here: Home → 2011 → April → 1 → Labor Export Policy to Blame for Deaths of Three Filipinos in China – Migrants’ Group

We should not allow our people to mourn over and over again for the loss of lives of our fellow Filipinos here and overseas. For the best way to render justice to Ordinario, Credo and Batain is not to allow such injustices anymore.” – Hustisya

MANILA — Migrante International said the execution of the three Filipinos in China is a “potent slap on the face” of the Philippine government, which rely heavily on the remittances of Filipinos working abroad to keep the economy afloat instead of generating jobs back home.

“We grieve not just for the family (of the three Filipinos) but for all Filipinos who are being forced to work abroad because of the widespread poverty in the country,” Migrante International chairperson Garry Martinez said after Vice President Jejomar Binay confirmed the death of the three Filipinos in a television report. 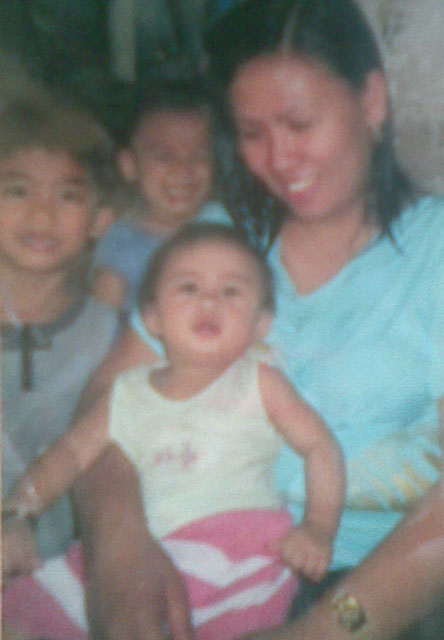 Sally Villanueva, one of the first Filipino nationals executed in China(Photo courtesy of the Ordinario Family / bulatlat.com)

The three Filipinos, namely Sally Villanueva, Ramon Credo and Elizabeth Batain, were convicted separately in 2008 and were the first Filipino nationals to be executed in China for carrying 4,410 grams, 4,113 grams and 6,800 grams of heroine, respectively. They were originally scheduled to be executed in February but the Chinese government moved it to March 30 after Vice President Binay, who, on a last ditch effort, was sent by the Philippine government to China to plead for the lives of the Filipinos.

The Philippine consulate in Xiamen reported to the Department of Foreign Affairs that Villanueva and Credo were able to see their kin for the last time an hour before they were executed.

“What are you doing here, why are you all crying, am I going to die?” Mylene Ordinario, quoting her sister Villanueva, said in a dzBB interview. Upon realizing what was going to happen to her, Villanueva reportedly said, “It (is) okay. I have accepted my fate. I will be your angel and watch over you.”

Villanueva and Credo were brought to an undisclosed venue at around 10:40 a.m. while Batain, who was to be executed in Shenzhen, was taken at 11:18 a.m. for execution.

Worries About the Future

In Manila, Villanueva’s sister Mirasol Del Finado said they are having a hard time accepting her eldest sister’s death because their family hoped that a miracle would happen up to the last minute. “My sister is a human being. She is not an animal. They (Chinese government) should have listened to our appeals.”

“We are poor. If my sister was really guilty, our family should have been well off by now. (But here I am) renting this house,” referring to a small house she lives in at Batasan Hills, Quezon City, “My siblings back in the province do not even have their own land to till,” Ordinario added. 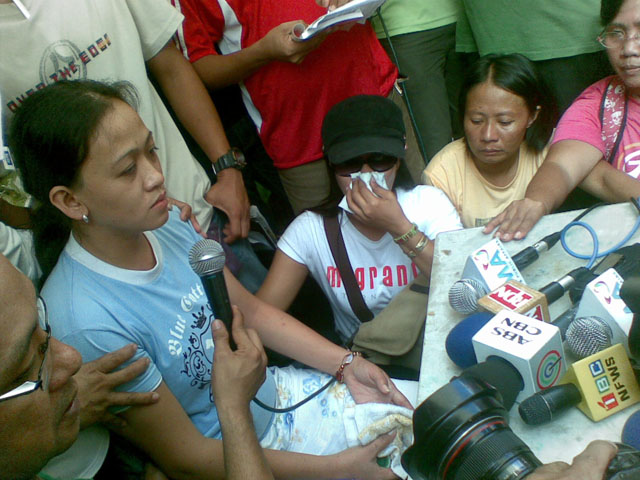 Ordinario said they are also worried for the welfare of Villanueva’s two children. Her eldest daughter will graduate as salutatorian at the Tubar Elementary School on April 9 and “the government’s gift to my niece is no less than the remains of my sister, their mother.”

In her last letter to her children, Villanueva said, “I love you Princess. I love you Lexbert. I will always love you.”

Ordinario added that one of her sister’s last wishes was for her children and her parents to be allowed to live in their house in Echague, Isabela. She told Bulatlat.com that Villanueva was not able to continue paying for the monthly amortization because of the ordeal she faced in China. She said her sister wanted her children to grow up in her “dream house.”

“She was strong up until the very end. We love her very much,” Ordinario told Bulatlat.com,

Joms Salvador, deputy secretary general of Gabriela, the largest women’s group in the Philippines, said President Benigno S. Aquino III has had enough wake up calls already. “It is difficult to wake up people who are merely pretending to be asleep,” she said.

Despite the fact that the three Filipinos were arrested in 2008, when Aquino was not yet president, Salvador said, he still has responsibility over their tragic end. She said Aquino has all the political machinery, such as the DFA, to be in kept abreast about these cases and could have acted promptly to save their lives.

She also expressed her dismay that no one from the Philippine government seemed to have the guts to confirm the deaths of the three Filipinos to the people. The DFA, early that day, said, through an interview over Radyo Inquirer, that they would not make any announcement regarding the execution of the three Filipinos.

Migrante International said that with the continuing ordeals that Filipinos are facing abroad and the government’s seeming neglect have made it “more apparent that the Aquino administration is no different from the previous regimes with regard to its adherence to the policy of exporting labor.

What the government needs to do, Migrante International said, is to “reinforce creation of jobs at home” and “ease the onslaught of price hikes” that could help stop forced labor migration. “The OFWs and their families need the government in times like this to implement fundamental and radical reforms that would deviate from the government’s labor export policy.

The Health Alliance for Democracy said that if necessary changes would be implemented by the Aquino government, it would help end the exploitation of Filipinos here and abroad. The group added that poverty, for one, should be addressed as it pushes Filipinos to work abroad, where they are “placed in such vulnerable positions” as “they seek to augment their income.”

Hustisya, an organization of victims of human rights violations in the Philippines, on the other hand, asked the Aquino administration to “put a stop to luring Filipinos to modern-day slavery all around the globe.”

“We should not allow our people to mourn over and over again for the loss of lives of our fellow Filipinos here and overseas. For the best way to render justice to Ordinario, Credo and Batain is not to allow such injustices anymore,” Hustisya said in a statement.

Migrante International challenged the Aquino administration “to work and push for the building of a self-reliant economy to stop labor export and promote social equity and justice for the advancement of genuine national development.”