Remains of One of the OFWs Executed in China Arrive Home

Sally Ordinario-Villanueva’s sister Mirasol said that the government should generate jobs so that Filipinos would not be forced to leave and work abroad. She also urged the government to go after the drugs syndicates that victimized Sally.

MANILA — There were so many cargo boxes placed one on top of the other at the Philippine Airlines International Cargo inside the Ninoy Aquino International Airport compound. But when the Ordinario family came in, their eyes were glued on a particular cargo box, wrapped in a moss green fabric. They hastily walked towards it and Basilisa Ordinario, 53, bent down crying to hug it.

“My daughter, please wake up,” Basilisa said, “I am sorry that mama was not able to save you.”

Inside the cargo box lie the remains of Sally Ordinario-Villanueva, Basilisa’s eldest daughter, who was sentenced to die last March 30 in Xiamen, China. At last, Sally was sent home on April 6, Wednesday night.

Sally was a former domestic helper in Macau. Upon returning home in 2008, an acquaintance from Macau, Mapet Cortez, also known as Tita Cacayan, offered her a cellphone business that would entail traveling to China. In her sworn statement published in a national daily, Sally said that she accepted the offer because she was jobless at that time. 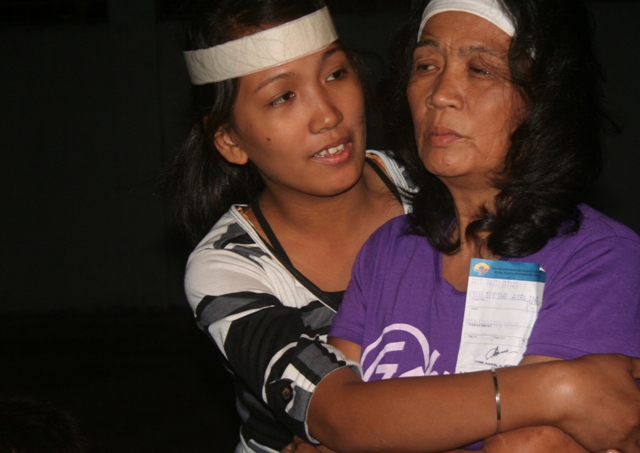 Cacayan, however, asked Sally to use her silver-grey suitcase that “appeared to be empty.” But, as it turned out, the suitcase was loaded with 4,410 grams of heroin. She was then apprehended by Chinese authorities upon arrival at Xiamen Gaoqi International Airport on December 24, 2008. Sally was consequently convicted and was sentenced to die last March 30 despite the late and the last ditch efforts of the Philippine government to plead for her life and for two other overseas Filipino workers Ramon Credo and Elizabeth Batain, who were also apprehended in China for carrying heroin.

“I remember how we hugged each other (here at the airport) when we fetched her,” Jason, Sally’s sister, told Bulatlat.com, referring to Sally’s return from Macau, “But tonight is different because we would no longer be able to hug her. She is dead.”

The Ordinario family, Basilia said, could hardly accept what happened to Sally. She said she could not help but recall that she was so “alive and healthy” when she last talked with her, hours before she was executed. Basilia, her husband Geronimo, Jason and Mailene were in China to be with Sally at that time.

“Be strong. You still have four other children to tend to,” Basilisa said, quoting Sally, “But no parent could ever accept what was going to happen to her.” 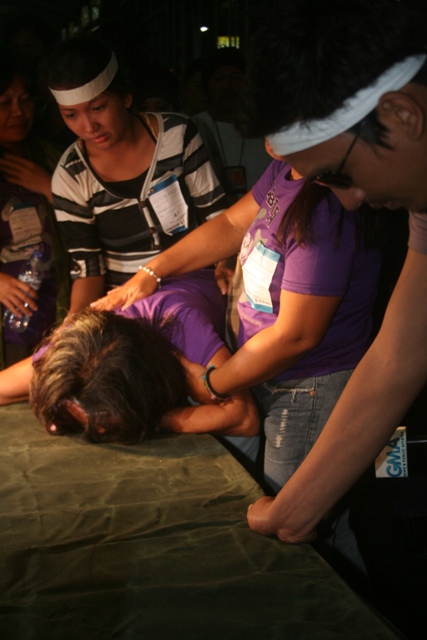 A few hours later, upon seeing her daughter’s remains, Basilisa said: “That was when I started crying and shouting. I hugged her and she was still warm. I thought maybe she was still alive. A tear dropped from her eyes as I closed it. I wiped it with my handkerchief, which I still keep with me up to now. I kissed her.”

When asked how they are supporting their mother in what they are going through, Jason said that they gather strength from each other. “We would tell her that my sister is in a better place now, in heaven. She is around us like an angel.”

“We are holding on to her final words that she would be our guardian angel,” Mirasol Ordinario Del Finado said, “It keeps us strong for now.”

When asked about Tita Cacayan’s reported claims that she, too, was a victim, Mirasol said that she is lucky that they have not yet crossed each other’s path. “I would slap her. But it is still not enough to pay for what she has done to our family.”

In an interview earlier that day, Sally’s father, Geronimo, said that Cacayan has spilled the beans to her wife. “She said that my daughter is stupid because of all the people she sent (to China) it was only her who was apprehended,” he said, “It is very insulting because she makes it appear as if she has done nothing wrong.”

Migrante International, for its part, said that the death of the three Filipinos in China, which is a first in the country’s history of labor migration, should serve as an eye-opener to the Philippine government that labor export policy is not the solution to the worsening unemployment in the country.

“It is also high time to address the widespread poverty that pushes many Filipinos to look for work abroad,” Migrante International chairman Garry Martinez said.

Martinez added that there are still 122 Filipinos in death row worldwide. “The government should not repeat its last minute ditch efforts to save their lives. Every Filipino outside the country has a right to legal representation in court, which the Philippine government should always ensure.”