Workers in Japan Firms in the Philippines Also “Hit” By Disaster

“The Philippine government has been giving foreign companies, including Japanese firms, a lot of incentives and perks. We hope the government would also extend to us some help, especially now that thousands of Filipino workers may be adversely affected by the disaster that hit their parent or supplier companies in Japan.” – Dexter Datu, chairman of Metalworkers Alliance of the Philippines (MWAP)

CABUYAO, Laguna –- Some Japanese firms producing cars in the Philippines reportedly told their local employees here that if the situation in Japan continues to worsen in the aftermath of the earthquake and tsunami, their operations here may eventually be affected by lack of raw materials starting next month. This could result in a shutdown and retrenchment of employees by May, further worsening the problem of joblessness in the country.

Dexter Datu, chairman of Metalworkers Alliance of the Philippines (MWAP) and president of the union of employees of International Wiring Systems, a Japanese-owned company based in Luisita Industrial Park in Tarlac, told Bulatlat.com they would bring the suggestions they gathered from their members to Malacañang and to other government agencies such as the labor department in an effort to seek aid and relief as the disasters in Japan threaten now to cause layoffs and loss of employee benefits to workers in the Philippines. 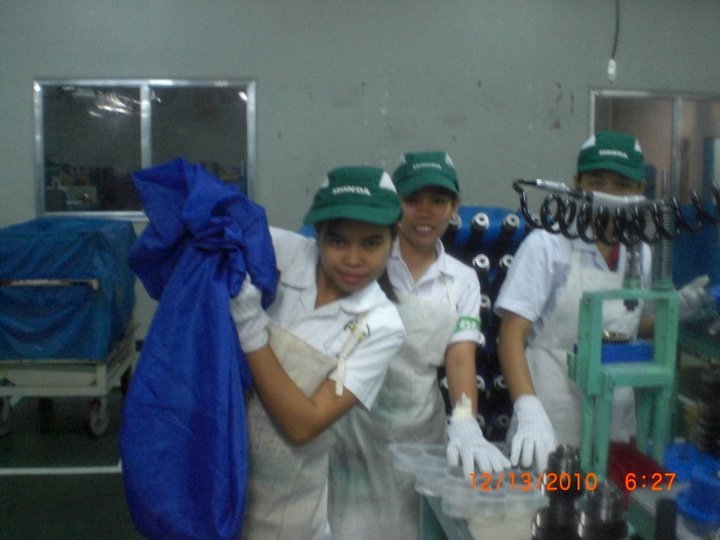 Makers of car parts for local market and for export felt the first tremors of Japan earthquake in the forms of cutbacks on benefits, forced leaves and temporary lay-offs.(Contributed photo / bulatlat.com)

“The Philippine government has been giving foreign companies, including Japanese firms, a lot of incentives and perks. We hope the government would also extend to us some help and immediate relief, especially now that hundreds to thousands of Filipino workers may be adversely affected by the disaster that hit their parent or supplier companies in Japan,” Datu said. Their group has just concluded a consultation with workers in some Japanese-owned companies in Laguna. They are still about to hold other consultations with members in Central Luzon, as well as in the Visayas.

After the twin disasters of earthquake and tsunami hit parts of Japan last March 7, causing fears of a nuclear meltdown, Japanese firms overseas such as these companies based in Laguna in the Philippines that are sourcing materials from Japan have been immediately affected. This month, Japanese firms producing car parts and accessories have already begun implementing a scheduled shutdown of operations, resulting in forced leaves and “temporary layoffs” mostly affecting the non-regular and contractual workers.

Car makers, meanwhile, who still have parts for production in their warehouses, are still continuing production this month but in a reduced scale of nearly 50-percent.

Workers in Toyota, Honda and in companies supplying some of their parts, for instance the EMI-Yazaki, Honda Parts Manufacturing Corp. , F.Tech and IWS, told Bulatlat.com that they are either undergoing forced leaves or vacations (with limited or without pay) beginning this month. Their plants have temporarily shut down operations, or their contractual or non-regular workers are already being “temporarily laid-off”, as a result of the disasters that struck Japan. These four car parts makers have a combined workforce of more than 8,000.

The workers from EMI-Yazaki in Laguna said that before the tsunami hit Japan, their employers had been hiring new people. Now, aside from laying off employees and forcing others to go on leave, the company has also temporarily turned down a new batch of “student-trainees.” The company regularly “employs” student trainees who perform jobs of regular workers for a lower wage rate. 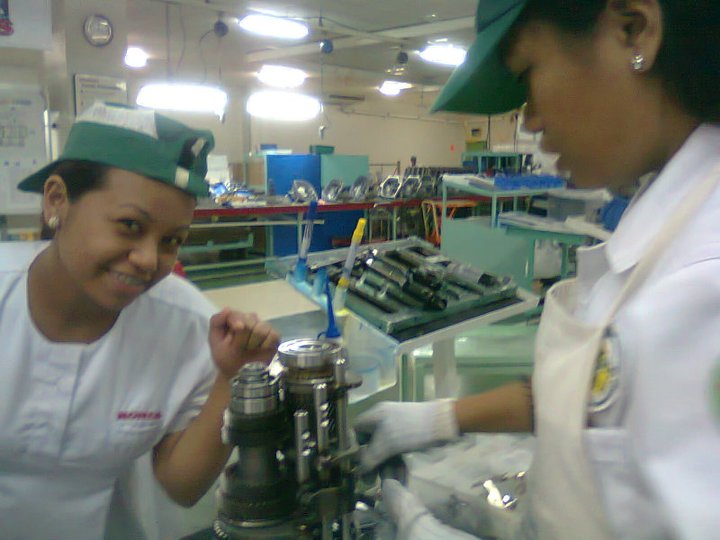 Workers from Honda Parts before the tsunami hit their mother company.(Contributed photo / bulatlat.com)

The car parts workers in Honda, on the other hand, noted that even without the tsunami in Japan, their employers seemed to have prepared to impose a scheduled shutdown and to pay its regular workers only 50-percent of their forced leave (only if they filed for a vacation leave during the shutdown). The workers told Bulatlat.com that immediately after the tsunami, the management increased their production output without commensurate additional pay. As such, despite their scheduled shutdown, their total projected output has been met. In effect, they said the tsunami seemed to have provided their company a convenient excuse to impose a compressed workweek and scrimp on their pay.

In Japanese-owned F.Tech (Fukuda) where the employees (called “associates”) make auto parts, particularly pedals, brakes, clutch, suspension and assembly parts for export to Thailand, Malaysia and Japan, the company has imposed this month a forced leave of absence to its regular employees as they temporarily shut down departments such as stamping, assembler, pedal and suspension. The company retrenched some contractual employees.

Meanwhile, according to employees in the Japanese car manufacturing plants in the Philippines such as Honda Cars and Toyota, they still have inventories of finished cars in their stockyards as of today – but their companies have begun instituting production changes to adjust for lack of materials coming from Japan for the time being.

Both Toyota and Honda have reduced their production outputs. Toyota and Honda carmakers based in Southern Tagalog have a combined total workforce of more than 1,000. They produce cars more for local consumption, and only a small percentage is for export. It is the car parts makers exporting to many countries abroad who have earlier been forced to go on leave or out of work.

Workers from Honda Parts Manufacturing Corp., for example, said they have been asked by their employers to donate their meal allowances to the victims of the disaster in Japan, which they sent via Red Cross. The Honda employees, including their managers, have reportedly raised as much as P263,000 ($6,05.40) as donations. Honda and Toyota in the Philippines reportedly gave donations as well.

In another Japanese-owned car parts company, the workers’ scheduled sports fest and family day were scrapped as they donated its budget instead to victims of tsunami in Japan. Workers were asked also to voluntarily donate for the victims of the disaster, as well as to join and pay for a Fun Run scheduled on Apr 15 also for the disaster victims.

“The earthquake and tsunami happened in Japan, but we are being shaken and affected here as well,” said a worker whose union is a member of the Metal Workers Alliance in the Philippines (MWAP). After holding a consultation with member unionists from Southern Tagalog Japanese metal companies, MWAP said they will continue to survey the impact of the disaster in Japan to local Japanese firms, and to gather suggestions which they plan to bring to the attention of Philippine government agencies in hopes that they would also give the workers some aid.

“The Philippine government should also strive to come in aid of the workers affected by the disaster in Japan,” said Dexter Datu. They found out during their consultation that some Japanese employers in the Philippines are citing a local labor law provision giving companies the freedom to curtail operations and provision of workers’ benefits in times of disasters. The workers under the MWAP are now asking why the Philippine government is not even making noises about coming in aid of the workers, who, in this sense, are also “disaster victims.”

They added that the Philippine government should now formulate a more long-term jobs generation strategy, rather than be caught unprepared by a worsened jobs crisis as a result of natural and political disasters overseas. Last week the government appeared more preoccupied with courting more jobs similar to the jobs of these metalworkers in Japanese-owned companies. The government said they would send a delegation to Japan to look for Japanese production that may be transferred to the Philippines because of the disaster.