Suffering What Even Adults Should Not Go Through

It has been said that children are always caught in the crossfire in a war preventing them from having normal lives. It would have even been better if this was the case, because the following stories are accounts of children who became the target of attacks by the military.

Mica, 11, is a girl with a playful smile from Calinog, Iloilo. At first sight, no one could have suspected that she is a victim of military harassment. When she was asked about how she felt when some Army soldiers offered her P50 in exchange for pinpointing the whereabouts of New People’s Army (NPA) guerillas, she became uncomfortable, glanced several times at her mother Annabelle with questioning eyes, and her face was completely void of the smile she had minutes ago.

Memories of the January 5, 2011 incident in Mica’s home may have been traumatic to her, gauging from her reaction when asked about how she felt about what happened.

What seemed to be a typical afternoon for Mica’s household was rattled by a sudden “visit” of five members of the Army and four from the Citizens Armed Forces Geographical Unit (CAFGU) on January 5, 2011. The Army soldiers were led by a certain Opeña and were from the Charlie Company of the 61st IBPA, while the CAFGU members were Rex Educado, Ryan L. Lozada, Leo Lozada and Ipil L.Lozada, who lived in the same barangay as the Lorenos. 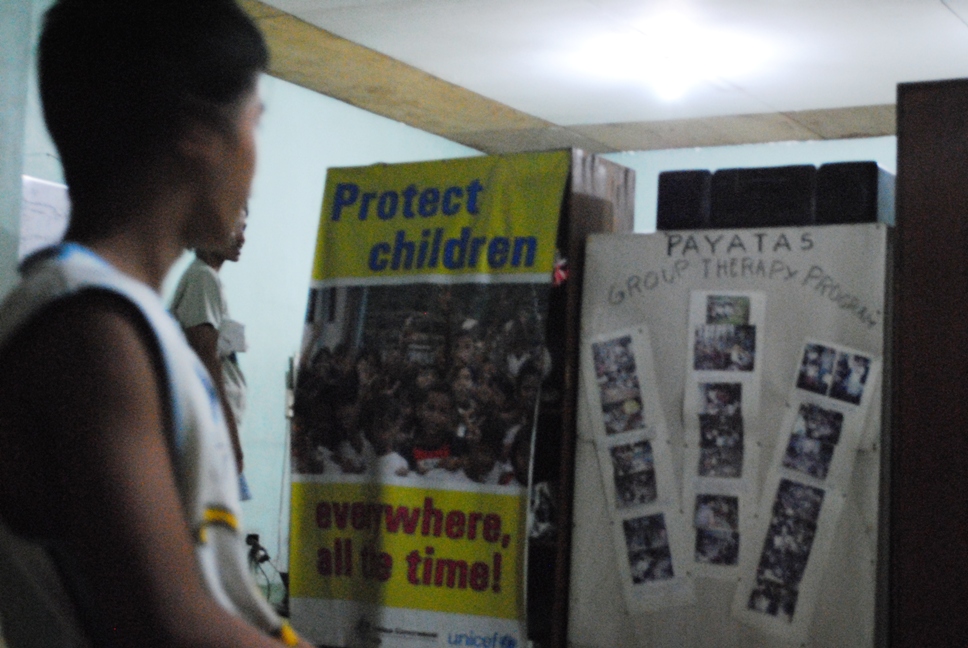 Despite her fear, Mica was able to recognize Opeña as the same man she played with in 2007 when her father was held captive by soldiers and was forced to cook for soldiers manning the 47th Infantry Battalion’s detachment (a former barangay hall). Opeña and other soldiers usually took Mica with them to play basketball.

With rifles pointing at them, Mica and her three younger siblings cried and held each other close. Tina*, eldest of the siblings ran away and hid herself in one of their rooms in the upper portion of the house. The Army and CAFGU soldiers started asking where the NPA was, but when they were not able to get information from Mica and her family, the soldiers decided to move to the barangay hall and ordered Mica and Tina to accompany them. Annabelle was not able to argue with the intruders and instead, let her children accompany the soldiers to the barangay hall, even if Mica had not had her meal yet.

The incident brought different and grave effects on Mica and Tina.
On their way home from school that day, Mica vomited blood as a result of her ulcer, which was aggravated by the fact that she had not eaten lunch yet when she was taken by the soldiers and the stress she felt when she was held captive.

However, Mica’s sister Tina appeared to have suffered a worse trauma from the incident.

On the night of January 5, Tina slept early after eating little rice for supper. And at around 7 P.M. she rose from sleep and started shouting “Tay, d’yan dun sanda, tiruhon nanda kami!” (‘Tay, there they are, they are going to shoot us!). Her father calmed her and put her to sleep, but she awoke several times, screaming and crying. Her parents took turns in calming her and making her sleep.

The next day she had a high fever and was not able to walk. Her family could not let her be admitted in the hospital, like what the doctor told them to. She was diagnosed with anxiety disorder.

On the following days, her parents have observed her unusual behaviour. According to the report, Tina “tied the hands of her younger sibling, beat her hands like she was conducting the singing of the national anthem and laughed alone without any reason.” In another instance, she “placed her younger sister in a sack and lifted it while laughing” and her younger sister “was screaming and crying inside [the sack].”

With Tina not having her regular dose of medicine and Annabelle’s husband jobless, the family transferred from one place to another for fear of being killed by Opeña and the other soldiers.

According to Annabelle, her family received a death threat from Opeña after they filed a case against him. Opeña has retired but could not get his full retirement benefits due to the case the former filed against him on February 2011.

While Annabelle and Mica are in the custody of the Children’s Rehabilitation Center, Mica’s father and her four other siblings, including Tina, are still in Calinog, Iloilo without a suitable place to stay and dependent on what other people give them for food.

When asked what Annabelle hopes to achieve by going to the city, she said, she only wanted to get justice for what happened to her children and to cause the pull out of the soldiers who, up to the now, have been operating in their barangay.

*not their real names

Joseph is just 14 years old but what he experienced in just six hours is too much even for adults.

Joseph, together with seven other farmers, were walking when around 30 soldiers from the 36th IBPA accosted them. The soldiers accused them of being members of the New People’s Army (NPA) and started asking them about the place where they hide their firearms.

“What could I tell them when it is not true?” Joseph said.

Joseph said that while their hands were tied at the back, two soldiers made them lie on the ground face down and stepped on their backs with the latter’s combat boots. Aside from this, they were exposed to the rain, made to eat spoiled food, and their heads were covered with plastic bags,choking them.

Joseph was then offered P20,000 ($464) by someone who he identified as Scout Ranger Ocampo in exchange for pointing the place where the men allegedly hid their firearms. Since Joseph was firm that he did not know anything, Ocampo threatened to bury him alive or to push him out of a helicopter while in flight.

When asked what his dreams are, Joseph said, he wants to finish school. However, the presence of the military in Brgy. Mahaba in Surigao del Sur, their lack of a stable income because of their constant transfer from one place to another, and his fear hinder him from finishing elementary school.

Joseph also said that one of their neighbors was abducted by the military and up to now, there are no news regarding his whereabouts. Joseph’s family could not even go back to their seven-hectare land because of the presence of soldiers.

According to a report, Brgy. Mahaba residents heard “explosions and gunfire” from August 28 to 30, forcing them to evacuate to San Isidro Amontay and to the Marihatag Municipal Gym.

“The military set up base in Surigao del Sur to protect mining operations. Because of the community’s refusal to leave and give way to mining operations, the military invented stories about sightings of NPA guerillas and conducted massive military operations from August 28 to 30, 2010. The soldiers even made a show of conducting medical missions but the truth is, they have an anti-people hidden agenda,” said Teody Aboyot, KARAPATAN-CARAGA staff.

Not an Isolated Case

Joseph’s case is not totally different from that of Edmar’s* brother Nilo. Military men deployed in a detachment in San Juan, Batangas befriended him along with other young men in their barangay. And when Nilo refused the soldiers’ invitation they became cold to him. During an outing on August 28, 2010, three soldiers physically assaulted him and accused him of sexual harassment when Nilo unintentionally went inside the ladies’ room. Nilo said he mistakenly entered the ladies’ room because there was no sign indicating whether the comfort room was for men’s or ladies’.

According to Edmar, his brother’s condition has somehow improved except for instances when Nilo remembers the torture. He would then become very angry and violent. However, they were not given the much-needed support from the community since town folks were already wooed by rice and liquor that military soldiers give them.

“Even if they already feel that their rights are being violated they do not file complaints,” said Edmar.

Even though Edmar and his family could not go back to their home because soldiers kept asking about their whereabouts, his stay in Manila under CRC has made him realize his goal: to continue the fight for justice for his brother and his family.