Braving the summer heat, members of the environmental groups Kalikasan PNE and Center for Environmental Concerns (CEC) as well as people’s organizations under the Bagong Alyansang Makabayan (BAYAN) held a colorful parade last April 19 as an early Earth Day Celebration.

Participants wore colorful head-dresses atop which were various symbols representing environmental concerns such as global warming, various types of pollution, deforestation, potential nuclear catastrophes and ecological imbalance. The human rights group Hustisya in the meantime presented a white cross wherein names of the various environmental activists who were killed by government forces.

Failing to Protect The Environment

Kalikasan-PNE previously released a report on the environmental situation and how the Benigno Aquino III administration has failed to address various issues concerning environmental protection and the preservation of the country’s natural resources against the plunder of business interests.

Clemente Bautista, Jr., Kalikasan-PNE national coordinator said that the Aquino government has not been a defender of the environment and that it has adopted the policies of the previous regime of exploiting the country’s mining, forestry and water resources for profit generation and at the expense of communities and the environment. 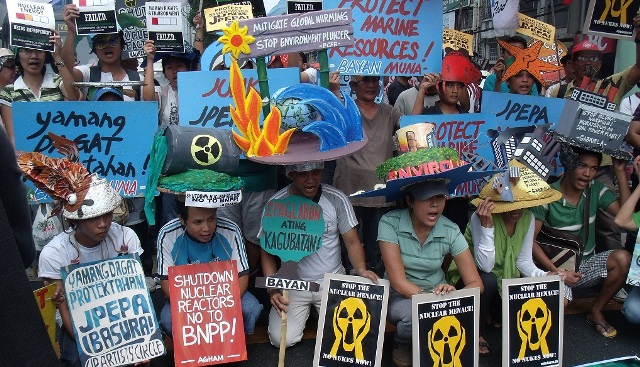 Protesters wear hats to highlight their calls for the protection of the environment.(Photo By Ina Alleco R. Silverio / bulatlat.com)

“President Aquino has not heeded the pleas of communities to put a stop to environmental destruction by strictly regulating the mining and forest industries. Instead of finding better, cleaner and more efficient energy sources, the Aquino government is fully supporting the operations of coal-fired power plants that pollute the air. The destruction of the environment has also threatened the existence of many animal species and plant varieties. What we have is a government that cares nothing for the sanctity of the environment, and in its narrow-minded pursuit of profit, it allows foreign multinational and transnational companies to destroy the environment,” he said.

According to reports, the Philippines is one of the world’s top biodiversity hotspots. Based on the reckoning of Conservation International, 16 new species of mammals were discovered in the last ten years in the country, putting it in the list of the countries with the highest rates of discovery.

“But because of the rapid rate of environmental destruction, the Philippines is also among the countries with the highest rates of endemism. Forests are being cut down because of widespread commercial logging and large scale mining. It’s not alarmist to say that because of this, countless species of flora and fauna might become extinct even before they are discovered. The threats against the environment are very real,” Clemente said.

Clemente shared that the united Nations declared the year 2011 as the International Year of the Forests, and declared the theme “Forests for the People.”

“In the Philippines, the forest areas are largely controlled by logging firms. President Aquino tries to project himself as an environmentalist when he declared a total log ban, but the truth is, his efforts remain very inadequate. Yes, he ordered a moratorium on logging in remaining natural and residual forests, but the Department of Environment and Natural Resources (DENR) continues to allow large-scale logging operations. In Aurora province, for instance, big logging concessionaires owned or protected by political families cut down forests in Sierra Madre,” he said.

Pia Malayao of the Kalipunan ng mga Katutubong Mamamayan ng Pilipinas (KAMP or Alliance of Indigenous Peoples) said that the mining industry has long been exploited at the expense of communities of indigenous people. 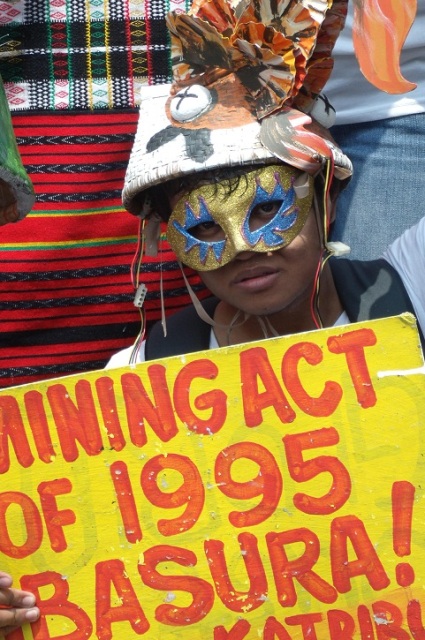 “Our collective rights have been continuously violated as mining companies with the full-backing of the government’s so-called environment agencies conducted their operations. Mining has not benefited the indigenous communities the same way it has done nothing to help the country’s economy because all the profits are appropriated by the mining firms,” she said.

It was for this reason that indigenous peoples were behind the Pro-People’s Mining Bill or House Bill No. 4315, or the People’s Mining Act of 2011. The measure led by the progressive party-lists Bayan Muna, Anakpawis and Gabriela Women’s Party aims to reorient the Philippine mining industry towards serving the needs of domestic and self-reliant economic development, national industrialization, and agricultural modernization.