“His works as a writer, poet, thespian, singer and songwriter have remained relevant especially to the succeeding generations of UP activists in and out of the university. His bias for the poor and oppressed dates back to his campus days.”

Mrs. Liwayway Acosta is graceful in keeping her pain hidden; but sometimes it becomes too much and tears fall and she struggles to regain her composure.

For over two months now, Mrs. Liwayway and her husband Isaias Acosta and have been worried because one of their two children, their son, writer and poet Ericson, 37, had been detained and falsely and maliciously charged with illegal possession of firearms in Catbalogan, Samar. Both mother and father are now at the lead of a campaign pressing for their poet-son’s immediate release.

“At least we know that he’s alright and that he’s not being hurt. That was our greatest worry in the beginning. Our son is made of stronger stuff and we know that he’s holding up in prison. This is not the kind of thing that will break Eric,” said Mrs. Acosta.

Mr. Acosta in the meantime is the unashamedly proud father. He even has a list of his only child’s achievements since grade school, and at the drop of a hat can enumerate the various literary, theatrical and scientific awards Ericson has received since he was in shorts and attending grade school in St. Mary’s College,and eventually when he went to the University of Sto. Tomas for his secondary education.

“He has never been anything but a good son, an intelligent student, and a loving parent to his own son Emmanuel,” said Mr. Acosta.

Two weeks ago, the family and Ericson’s friends and former colleagues officially launched the Free Ericson Acosta campaign in Quezon City. It was a reunion of sorts for Ericson’s friends from his university days, and an event that saw some of the most respected names in the Philippines’ literary circles placing their support behind an artist who chose a path of human rights activism. 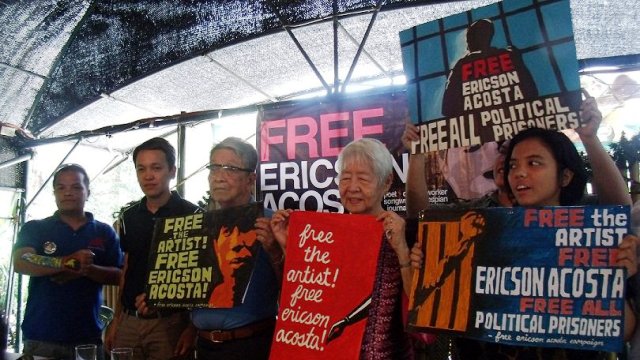 Family, friends and supporters from the art community commit their support to the Free Ericson Acosta Campaign. At the lead are father Isaias Acosta and mother Liwayway (not in picture)..(Photo by Ina Alleco R. Silverio / bulatlat.com)

At the time when Ericson was arrested earlier last February 13, he was a freelance journalist documenting the human rights situation in Western Samar. He was arrested in the company of various community leaders from a farmers’ organization who staunchly defended him and affirmed his work as a writer.

During the campaign launch press conference, Ericson’s former editor-in-chief in the Philippine Collegian Michael John Ac-ac said that the former had true artist sensibilities and that he, Ericson, honed it through the years by voracious reading, prolific writing and by constantly discovering developments in the cultural scene.

Ac-ac remembered how Ericson was able to put together the Philippine Collegian’s 1994 literary folio F1 decades after it was last published. He said that Ericson also liked to write about previously-undiscovered musicians and helped make them popular. Among his “discoveries” were the now defunct but legendary groups Yano and the Eraserheads.

“Ericson always had a lively mind, but he has an even bigger heart It was not surprising that he eventually chose to become a full-time journalist writing about human rights,” said Ac-ac.

In a testimony sent by Palanca-award winning director and actor Rody Vera, he said that Ericson has been acting as early as 1984 and in a Shakepearean play no less. Vera said that he worked with the young Acosta in a production of the Philippine Educational Theater Association (PETA), rendering of the “dreaded Scottish play” Macbeth.

“I’m not sure if Ericson was then aware that he was part of a production that was against the Marcos dictatorship. Ericson was part of a play that exposed Marcos’ selfish greed for power. Now, it’s most saddening to think that that the same machinery of torture, violence and repression that continues to operate against cultural workers like Ericson and the rest of the Filipino people, even if there is no dictator at the helm of government. Now they are wielding violence in the name of democracy. What is even more infuriating is how the violations being committed against Ericson can very well be perpetrated against any and all of us. The restriction of Ericson’s freedom is an attack against our own respective, individual freedoms,” he said.

Members of the UP academe comprised of artists and writers also released a statement calling for Ericson’s immediate and unconditional release from his current “illegal detention.” Panelists and participants in the 50th UP National Writer’s Workshop sent the statement straight from Baguio where the workshop was then being conducted. It was signed by the likes of National Artist Bienvenido Lumbera and writers and poets Jose Dalisay, Jr., Jun Cruz Reyes, Gemino Abad, J. Neil Garcia, Charlson Ong, Rolando Tolentino, Romulo Baquiran Jr. and Cristina Pantoja-Hidalgo.

Former Cultural Center of the Philippines (CCP) Vice President and Artistic Director Josef pointed out that the government under the Benigno Aquino III administration is challenged to be different from its predecessors. He said that it must free those whose only crime is serving the least serve, and that it must “Jail without delay those who have greedily taken away food on the table of the poor.”

“I know Ericson Acosta personally as a cultural worker. I am humbled by his sacrifices and his commitment to the poor. My accomplishments as an artist and cultural worker are nothing compared to his,” Josef said.

Secretary-general of the Bagong Alyansang Makabayan (Bayan) Renato Reyes shared what happened during his recent visit to Ericson at the Calbayog sub-provincial jail. According to him, Ericson was in “high spirits” and that the poet was grateful for all the support he was getting.

During the short visit, Reyes and Ericson recorded a few songs on a digital camera and the recordings have since been uploaded on Facebook and in the Free Ericson Acosta blog, http://freeacosta.blogspot.com.

Reyes said that there were plans to visit Ericson on or before his birthday this May 27 and that friends and supporters were very welcome to join. He also reminded supporters to contribute to the legal fund for Ericson.