You Are Here: Home → 2011 → April → 29 → Neglect of occupational health and safety results in death, injuries of workers

Neglect of occupational health and safety results in death, injuries of workers

For the year 2009 – 2010, the Institute for Occupational Health and Safety Development (IOHSAD) recorded at least 511 deaths and 791 injured in work-related incidents in the Philippines. According to the International Labor Organization (ILO), a worker dies every 15 seconds because of work-related injuries and accidents.

On April 28, the Institute for Occupational Health and Safety Development (IOHSAD) held a forum in Manila as part of its contribution to the international worldwide commemoration of Workers Memorial Day 2011.

IOHSAD’s executive director Noel Colina explained that Workers Memorial Day began in Canada in 1989, when the Canadian Union of Public Employees adopted the resolution to annually remember and mourn workers who have were killed in the workplace or died as a result of sickness directly caused by their work.

Participants of the gathering, workers from various unions of the Kilusang Mayo Uno (KMU) and the Solidarity of Cavite Workers lit candles in memory of workers who died or were killed in the workplace.

“Our gathering today is very timely, as death brought by work continues to take its toll on the lives of our brothers and sisters,” said Colina.

Every 15 Seconds a Worker Dies

According to Colina, the issue of occupational safety is as important because it directly affects the health and welfare of workers as much as the issue of wages. He cited data from the International Labour Organization (ILO), saying that work-related injuries and accidents take the lives of millions of workers, with one worker dying every 15 seconds.
Workers suffer approximately 270 million occupational accidents each year, and fall victim to some 160 million incidents of work-related illnesses. 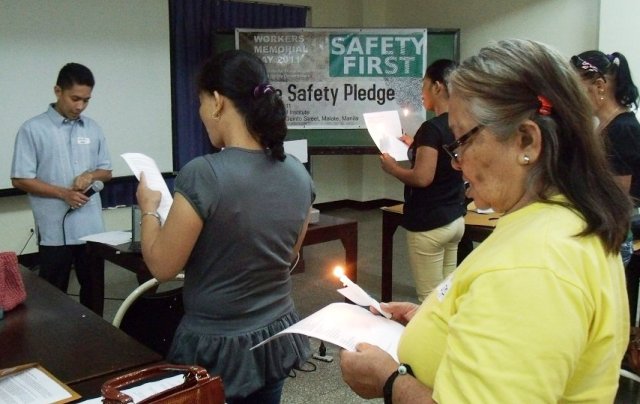 “For the year 2009 – 2010, we’ve recorded at least 511 deaths and 791 injured due to work in the Philippines. and these are from reports that were actually documented. We can only shake our heads at the grim possibility that the actual number is much higher. Many more lives are lost under the radar of the mainstream media. There are hardly any reports in the media about workers who suffer and die because of various work-related diseases,” said Colina.

Colina said that one of the main reasons why so many work-related injuries and deaths go unreported and undocumented by the Department of Labor and Employment (DoLE) and its agency the Occupational Health and Safety (OHS) is because of DOLE’s Order 57-04 which allows workplaces with more than 200 employees to undergo self-assessment.

“Rare is the company that reports accidents that take place and involve its workers. Most companies do not prioritize their workers’ health and safety in their operations. But they provide the most basic equipment and facilities to safeguard workers’ safety mainly because they want operations to be unhampered and not because they care about the workers’ themselves,” he said.

Colina highlighted the case of the 10 construction workers who fell to their death last January 27 as proof of the poor implementation of safety standards. One other worker who also fell did not die, but sustained serious injuries and might never work again.

“DO 57-04 actually underscores how little the labor department cares about protecting the safety of workers in the country. In the case of the ETON 11, only when the labor inspector visited the work site did the DOLE discover long-standing violations of existing occupational and safety standards, including other labor standards,” he said.

Dr. Sarah Concepicon, program manager of the Employees’ Compensation Commission (EEC) said that people should be aware that every work-related injury, fatality or disease was and is preventable.

“Companies should enforce OHS regulations firmly and constantly inform their employees about safety in the workplace. Responsibility largely lies with management to make sure that their workers do not come to harm in the workplace, and that they are not exposed to hazardous materials or deadly situations,” she said.

IOHSAD is at the helm of helping the families of the Eton 11.

Last April 26, families of the Eton 11 victims attended the second hearing on the case they filed against the Eton Properties Philippines Inc. management last March 25. The hearing was held at the offices of the National Labor Relations Commission (NLRC).

The families are charging the company and all its subcontractors “for unfair labor practice specifically the non-payment of minimum wages, unsafe working conditions, non-compliance to occupational health and safety regulations resulting to death, non-registration of social security, non-payment of social security benefits, employment of minor, and violation of labor standards.”

Colina said the families have a strong case. “The DOLE -National Capital Region (NCR) has already enforced ‘double indemnity penalties amounting to P5,239,857.17 and total unearned wages of P1,719,223.92 for the benefit of 339 construction workers’ from several of the contractors of Eton Properties last March 25, 2011,” he said. 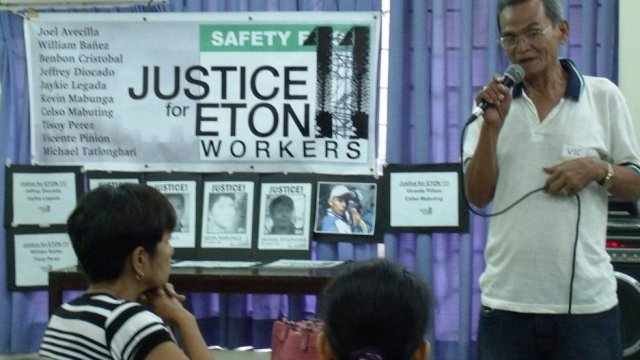 Eduardo Pinion, the father of one of the Eton 11 victims Vicente, shares the difficulties they are encountering in their pursuit of justice for the victims..(Photo by Ina Alleco R. Silverio / bulatlat.com)

Colina also mentioned the recent landslide in the small mining community in Pantukan, Compostela Valley province where three miners were killed. In the accident, another six miners were injured and 16 still declared missing.
“This is proof of how people really do sometimes get killed at work, when there are no health and safety measures in place, tragedies mount,” he said.

As part of their advocacy work for health and safety in the workplace, the IOHSAD has also launched a campaign calling for a ban against asbestos.

According to reports from the American Environmental Agency, asbestos is a mineral fiber used commonly in a variety of building construction materials for insulation and as a fire-retardant. It has fiber-strength and heat resistant properties, and because of this, it is also used for a wide range of manufactured goods, mostly in building materials (roofing shingles, ceiling and floor tiles, paper products, and asbestos cement products), friction products (automobile clutch, brake, and transmission parts), heat-resistant fabrics, packaging, gaskets, and coatings.