You Are Here: Home → 2011 → April → 29 → OFWs from Madagascar shocked by difficulty in getting assistance from government

OFWs from Madagascar shocked by difficulty in getting assistance from government

MANILA — Overseas Filipino Workers from Madagascar did not expect that their struggle to get what is due to them is by far harder back home.

“I was relieved when I was finally repatriated. I know that OFWs have contributed substantially to keep the country’s economy afloat and that the government should recognize this by giving what is due to us. But I was wrong, and the struggle that we are now going through is harder than I could ever imagine,” Mando Zuniega, 44, told Bulatlat.com

Zuniega and 945 other Filipinos were repatriated from Madagascar after a malaria outbreak in the worksite of Kentz Engineers and Constructors, one of the largest nickel-cobalt mining refineries in the world. The workers wanted to go home but their company refused, forcing migrant workers to hold a “work stoppage.” This paralyzed the company’s operations and the management decided to send them home.

Carlo Tanada, 41, another OFW from Madagascar, said they barely had money with them because, “most of our things were confiscated by immigration officials. They took all that we have, our money and our belongings.” Empty-handed, they turned to the government for help “but now it seems that they are denying it to us.” 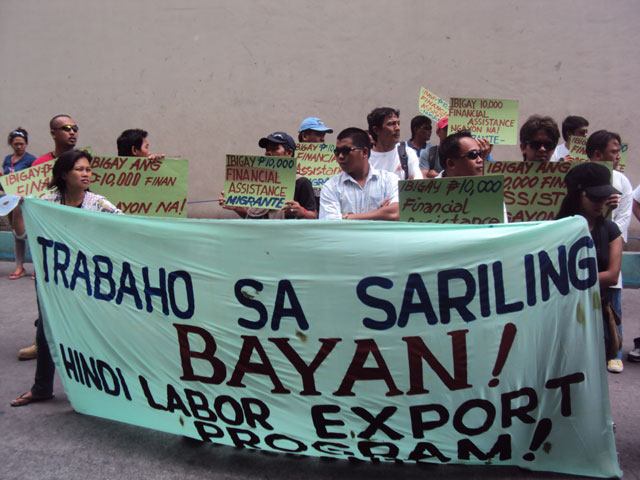 “It was as if we left Madagascar on our own volition,” Zuniega said. He added that he, in fact, has a vaccine against malaria and other possible diseases carried by mosquitoes. These vaccines were given to him by his previous employer in South Africa and are due to expire in five to 10 years. But, he said, he requested to be repatriated because he felt anything could happen. “The malaria that hit our worksite seemed to be too strong that those who had vaccines were still infected. How much more for those who were not given shots?”

Zuniega added that of all his previous employers abroad, their company in Madagascar is one of those who paid well. “Who would want to leave a work that pays well unless you are between life and death?” he said.

While there were no threats of guns and bullets in Madagascar, Tanada said in a previous interview, they were attacked by “deadly mosquitoes that have been killing people silently.” He added that they had to leave their jobs in Madagascar to ensure their safety, which, he said, should be no different from the case of the Filipino workers who were repatriated from the strife-torn Libya. The OFWs from Libya who were given a $232 financial assistance as soon as they got home.

On April 26, the OFWs from Madagascar trooped to the office of the Department of Labor and Employment in Intramuros, Manila, and, under the scorching heat of the sun, held a picket demanding the release of the $232 financial assistance for them. They also wanted to hold a dialogue with Labor secretary Rosalinda Baldoz so they could air their sentiments. Both demands were denied to them.

Zuniega said he could not understand why the government finds it hard to give what is due to OFWs. First, he said, the $232 is too small an amount when compared to the billions of dollars that the government is raking from OFW remittances. Secondly, he added that the $232 financial assistance is also too small in sustaining their family’s daily needs even for a week in the light of the increasing prices of everything.

But, he said, that no matter how small the $232 financial assistance may seem, it would greatly help them in dire times like this, especially since they are jobless and have no source of income.

For his part, Zuniega said that once he gets the $232 financial assistance, he would use it to pay for the monthly amortization of his house, which he loaned from Pag-ibig, a government housing agency. He said that he has not paid a single cent for his monthly amortization since he was repatriated last month.

Zuniega said that most Filipinos who were repatriated from Madagascar felt bad that they would be sent home. “We are already old, having spent the prime years of our life in jail. Where could we possibly land a job in the country when the youth, even those who graduated from college, could hardly find a job?”

Migrante International, an OFW group said that Filipinos are now forced to work abroad because there are “no jobs, livelihood, decent wages and because of the living conditions in the Philippines.” It is unfortunate, the group said, that the crisis of forced migration is aggravated by the present administration’s promotion and continuous implementation of labor export policy.

Gina Esguerra, Migrante International secretary general, said that what the OFWs and their families need at these times “are activities and programs from the government that would create jobs at home and ease the onslaught of price hikes in order to curb, if not stop, forced migration.”

She added that instead of implementing genuine agrarian reform and national industrialization, President Benigno S. Aquino III “further opened up the national economy to abuse and exploitation of our workers’ cheap labor by foreign capital and interests through his so-called flagship program, the Public-Private Partnership.”

Migrante International said that Filipino migrant workers also believe that the P125 wage increase should be implemented across the board nationwide. “It would be of big help to OFWs and their families,” Esguerra said.

Zuniega, meanwhile, said that while they are struggling to get their financial assistance, he would soon apply for work abroad. “To anywhere my fate may bring me. OFWs do not have a specific country in mind whenever they decide to work abroad. We do not even think if we would be confronted with a difficult job or not. What is important to us is that we are paid well so we could send it to our families back home.