According to the Confederation for Unity, Advancement and Recognition of Government Employees (COURAGE) , these are what comprise Malacañang’s post-Labor Day announcement. On May 1, Palace spokespersons said that President Benigno Aquino III has approved a salary adjustment for government workers and that it will be released in June.

Courage president Ferdinand Gaite said the announcement was meant to enhance President Aquino’s image in the eyes of state workers, many of whom have been steadily becoming disillusioned with his administration and its failure to implement significant economic reforms.

According to Gaite, the Aquino administration was trying to fool the public with its announcement.

“Malacañang claimed that administration officials, together with the Department of Budget and Management (DBM) and the president pulled strings just so employee’s demand for a wage hike can be made possible. This is a lie,” he said.

Gaite said that what Malacañang did is to fast-track the implementation of the third tranche of Salary Standardization Law 3 (SSL 3), originally set to be released in July. 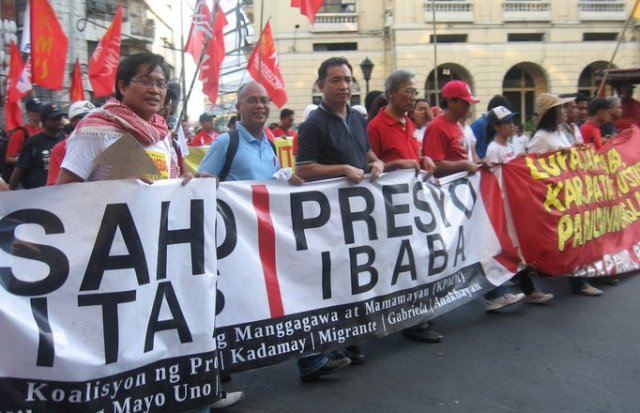 “Employees have nothing to look forward to because even before we receive our ‘adjusted’ salaries. The real value of the amount has already been eroded by inflation. Most rank-and-file employees have already committed it to pay their debts,” said Gaite.

The union leader said the second tranche of the SSL 3, the law mandating the staggered pay adjustment scheme passed during the Arroyo Administration, was also released in June last year.

“There’s absolutely nothing for Malacañang to brag about, and even more certain is the fact that government employees have nothing to thank President Aquino for,” he said.

Gaite said that for the country’s rank-and-file government employees who are already struggling to survive amid the rising costs of commodities, the issue is already beyond the SSL 3.He said that only President Aquino and top government officials with enormous pay hikes have benefitted and continue to benefit from the SSL 3.

“As for the rest of us, for the lower-salary grade employees and minimum wage earners subsist on meager wages, the SSL 3 is useless. Even with the full implementation of SSL 3 next year in 2012, the minimum pay will still only amount to P 9, 000 (US$209), way below the government’s estimated average Family Living Wage (FLW) pegged at P29, 640 (US$689.30) per month. We stand by our demand for a P6,000 (US$140) increase to the minimum pay of all government employees.,” Gaite insisted.

The president of the most progressive organization of government employees also criticized the May Day breakfast consultations that Aquino had with several conservative unions and their officials. Gaite said the composition of that breakfast consultation is indicative of the President’s views regarding the labor sector. Those who confirmed their attendance were the Trade Union Congress of the Philippines, Federation of Free Workers, and the Alliance of Filipino Workers, Alliance of Progressive Labor, among others.

“Ocampo is a member of the GSIS Board of Trustees who benefitted from the P88 million (US$204,651)compensation package given to GSIS Board Members, not to mention the 80,000 (US$1860) each board member received for attending board meetings, plus the numerous perks and benefits that they enjoyed. Ocampo was one of the GSIS fat cats who took our hard-earned money and used it to line their pockets with gold, while the overworked and underpaid rank-and-file employee struggles with starvation pay. It ‘s a scandal and a shame that instead of prosecuting her for pilfering millions of public funds, the Aquino administration considers her a labor leader,” he said.

“Aquino chose to speak with yellow labor leaders: criminals who stole funds from government employees, traitors who betrayed the rights and interests of workers!”

Gaite added that in choosing to dialogue with the likes of Ocampo, Aquino revealed his anti-labor character, capable only of dealing with yellow unions and leaders and deaf to the legitimate demands of Filipino workers and the rest of the working people.

Courage continues to support and call for the immediate passage of House Bill 3746 sponsored by Anakpawis Representative Rafael Mariano which mandates a P6,000 (US$140) salary hike for all government employees. It also fully supports HB 375 which seeks to grant a P125 (US$2.90) increase in the wages of private sector workers.

President Aquino gave himself a salary hike a month in advance

For her part, Gabriela Women’s Party Rep. Luz Ilagan said Malacañang should stop its attempts to trick workers into foregoing their demands for a salary hike.

“A wage increase for all public sector employees has been a law since 2009 and in fact the government owes its employees,” she said.

“President Aquino should not be too smug or self-righteous over the announcement. He is in fact duty bound by law to give government workers a pay hike under the SLL. Also, giving the mandated pay hike in June is not actually giving it one month early especially since government workers have been demanding for a P6,000 (US$69.76) across the board wage increase for ten years now and teachers are asking for a P9,000 wage hike (US$209) . The wage increases neither early nor enough,” said Ilagan.

Ilagan further said that the President stands to benefit from his announcement as this will in fact give him an early increase in his salary as well. Under the SSL, the President received the highest pay hike.

“Under the SSL, government workers under Salary Grade 1 will receive a meager 30 percent increase in their wages,” she said,