You Are Here: Home → 2011 → May → 6 → Cordillera elders form pact against mining, militarization

Main Story: The people of Lacub’s continuing struggle for land

In commemoration of Cordillera Day 2011, around 70 elders representing the different indigenous groups in the region sat together and discussed the issues that they are facing.

Each tribe was given an opportunity to speak about their problems- most of which are related to large-scale mining and human rights violations. Presently included in the National Priority Projects of the mining industry are those in the Cordillera.

Of the 11 in the Feasibility and Financing Stage, three – the Benguet-Balatok Tailings Project, Lepanto Consolidated Far South East Gold Project and the Itogon Suyoc Gold Project – are in the Cordilleras.

All the provinces of the Cordillera – Abra, Kalinga, Apayao, Benguet, Mt. Province and Ifugao – of which a part of the population are Igorots, have some form of mining application.

The areas of interest of mining transnational corporations present in the region per province are: 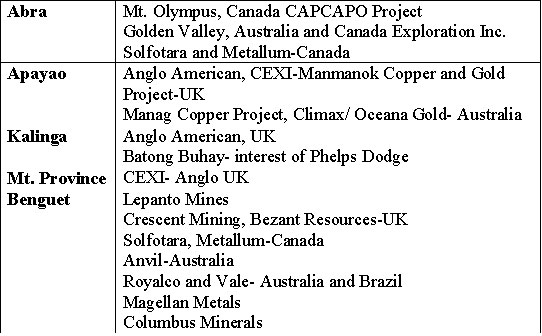 During the discussion, the elders expressed their fears regarding the militarization that is associated with the presence of mining companies in their area.

With the looming presence of the Philex Mining Corporation and its partner Golden Lake Minerals Inc. in Lacub, Abra, a military detachment was set up in the different barangays only last April 17 with no reason being given to the people.

In 2005, during the workers’ strike at the Lepanto Consolidated Mining Company (LCMCo), the police and military present in the area served as guards of the company and continuously harassed the workers. 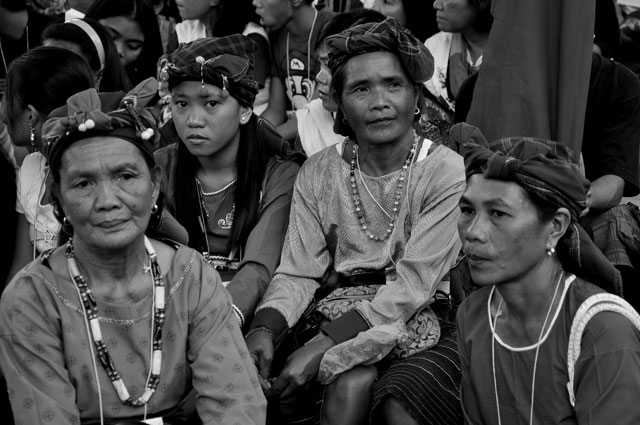 The elders then gave their own accounts on how they were able to fight the mining companies and were not cowered by the military’s presence.

Apo (Elder) Bun-as of Kalinga recounted how they were able to resist the proposed Chico Dam Project of former President Ferdinand Marcos. “At first, we were fighting as individuals- we did not prosper. However, when we fought as one, when we created the Kalinga-Bontoc Boddong (Pact), we were victorious,” Bun-as said.

An elder from Mankayan, Benguet also shared that when they decided to hold a barricade against the drilling of LCMCo in their area, they were able to assert their rights to their land because they were united.

Afterwards, the elders reached an agreement to create a multi-lateral pact that will be formed.

As a resolution, they agreed that all those present will support and implement the pact against large-scale mining and militarization. The elders’ have agreed that they will not be used by the destructive and oppressive companies trying to enter their domain. They also declared that they will never sell their community and land.

With regards to the militarization, the elders affirmed that they will not let the military set camp in their land and that they will fight and resist any attempt to do so including the creation of the Citizen’s Armed Force Geographical Unit (CAFGU).

The elders also agreed that they would assert before the government units specifically the National Commission on Indigenous Peoples (NCIP) and their local politicians that their rights as Indigenous Peoples should be the priority.

The elders then affirmed that through their united stand, together with all the indigenous peoples, they will fight against those who will abuse their land and resources. They then called on all the people to sign the unity pact.

Afterwards, the elders led the Pattong- the community dance of the Igorots to celebrate the pact and enjoin everyone to uphold it at all times.