You Are Here: Home → 2011 → May → 6 → What subsidy? Public utility drivers still demand for an oil price rollback

There are 214,596 registered public utility jeepneys in the country, but when the Aquino Government’s Pantawid Pasada program was finally begun first week of May, only 3,000 fuel cards loaded with P1,050 ($34.95) each had been prepared for distribution by the government.

MANILA –Do the math. There are 214,596 registered public utility jeepneys in the country, but when the Aquino Government’s Pantawid Pasada program was finally begun first week of May, only 3,000 fuel cards loaded with P1,050 ($34.95) each had been prepared for distribution by the government, and it has also prepared only one distribution center which is at Camp Crame in Quezon City. How could the rest of the country’s jeepney drivers be able to avail of that so-called Pantawid Pasada? asked George San Mateo, secretary-general of Pinag-isang Samahan ng mga Drivers at Operators Nationwide (PISTON).

San Mateo also pointed out as “highly irregular” the government’s decision to directly involve in the distribution of said fuel cards some transport organizations and federations. The distribution of the so-called subsidy should have been a straightforward transaction between individual franchise holders and the government, San Mateo explained. But the Department of Energy (DoE) decided in a meeting that the list of franchisees availing of the subsidy would have to be brought to the distribution centers by its associations. 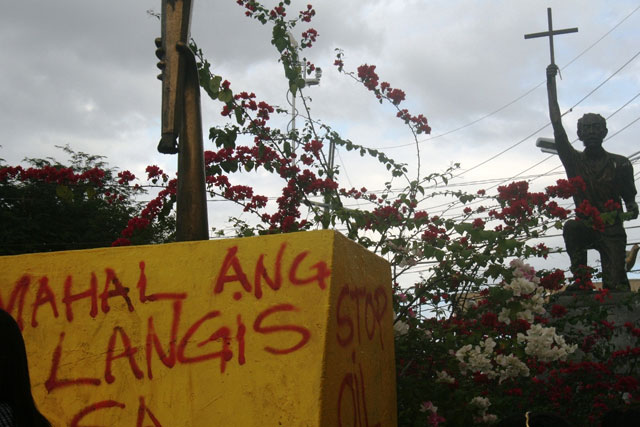 Other drivers’ associations have reportedly complied with the DOE stipulations, but Piston did not. Aside from seeing the process as “highly irregular,” Piston still has not yet forgotten the government’s oft-repeated threats against the franchise of its allies and members every time they would conduct a transport protest action. Why is the DOE requiring that, asked Piston, when the Land Transportations Franchising and Regulatory Board already has a master list of the jeepney franchise holders?

Last month Bayan Muna Partylist Representative Teddy Casiño had described Pantawid Pasada as “nothing but a drop in the fuel tanks of our country’s public transport drivers,” because the amount cannot even buy a full tank of diesel. He added that the initial P450 million ( $10.48 million) allotted for the fuel subsidy program that “will last for two months will not make a dent in the incomes of our jeepney and tricycle drivers and operators since the 11 oil price hikes so far this year have negated whatever subsidizing effect government purports this program will have.” 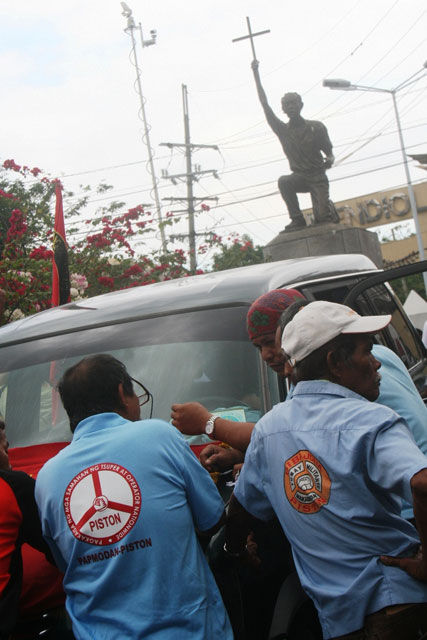 Today, as drivers’ associations observed the government’s slow distribution of the small subsidy, corruption is also being feared.

The Pantawid Pasada was announced last month at the height of a nationwide day of transport protests called for by Piston that combined paralyzing transport strikes in some provinces with transport caravans and rallies in Metro Manila. The nationwide transport protests had demanded an oil price rollback, as they urged the Aquino government to act on the persistent and still uncorrected overpricing of the big oil companies. The transport groups also demanded the scrapping of the EVAT on oil as a temporary relief, and the scrapping of the Oil Deregulation Law as one of the more long-term solutions to the persistent reported oil overpricing.

But instead the Aquino government decided on the Pantawid Pasada, with an initial announced budget of P450 million, when the first quarter windfall on EVAT on oil this year amounted to more than P4 billion ($92 million).

Yet, even this little amount seems in danger of ever reaching the intended driver beneficiaries. San Mateo noted that the Aquino government has repeatedly changed its “system” of distributing the subsidies prior to the May 2 start of implementation. From the originally planned three distribution centers, it had also slashed it to just one, San Mateo said. 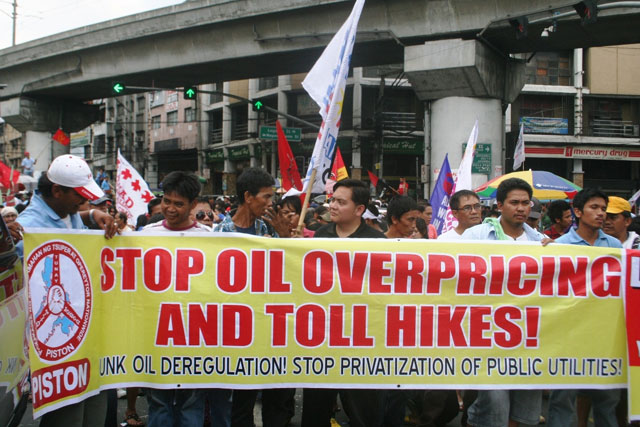 Aside from the DOE requiring the drivers’ associations to bring the list of their franchisees first, the Aquino government has also not yet announced any other schedule aside from the distribution of only 3,000 cards. “Why is there none for the provinces,” San Mateo also asked, adding that the price of diesel is P3 to P5 higher per liter in the provinces.

Amid the continuing rise of oil prices even when it is going down in the world market, Piston did not discount a Part two of their nationwide day of protests.