“The number one threat to Filipino health and job security is the US-Aquino Regime,” whose PPPs “result in privatization, in the abandonment of health as a right of the people, and in denying health workers decent wages and jobs.” – Health Alliance for Democracy.

MANILA— “Other people including graduates of ‘mere four-year-courses’ are earning higher salaries than me,” said a trained surgeon working for years now at a district hospital in a province north of Manila. He said that lack of doctors in their hospital has also forced him to work on “all kinds of cases and not just on an operating table.” Today, he admitted that he is applying for a job abroad. As a surgeon, he thought his career is also in danger here as a new regulation is “being cooked up” by the PRC (Professional Regulations Commission) in Manila requiring people like him to become member of a certain society of surgeons first, before he can renew his license.

Still, this doctor went to Manila and braved the scorching summer heat to join his colleagues from different hospitals and practices in commemorating the National Health Workers’ Day last May 7. The Health Workers’ Day main program peaked at high noon at the Mendiola Bridge.

Almost a year into Aquino’s presidency, health workers complained they “still suffer from low salaries, inadequate benefits and understaffing,” a plight some of them had thought would change under President Benigno “Noynoy” Aquino III. In his election campaign, Aquino was reputedly the only candidate who had promised to take care of public health. But today, a year into his presidency, a bigger allocation of the public purse has been going to militarization and debt servicing rather than public services such as health, said the health workers’ groups. 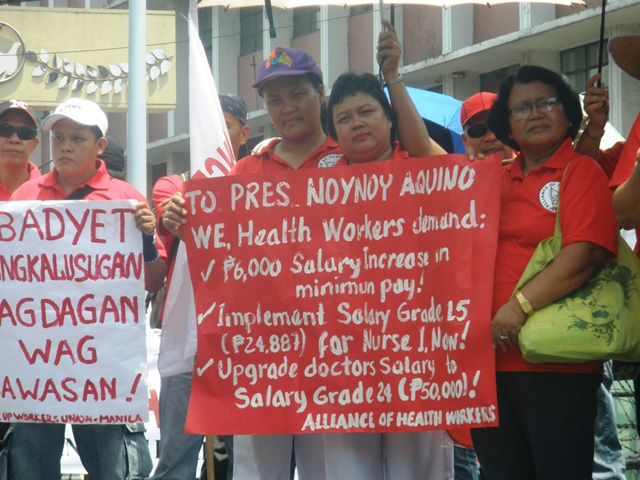 To finance health, Aquino increasingly turns to PPPs (public-private partnerships), which, the health workers’ groups said, are treating health services as “profitable” ventures rather than public services. They said the PPPs make health services available but costly to average Filipinos.

An elderly public hospital employee who went on leave to join her fellow health workers in their nationwide protest told Bulatlat.com they had “really believed things would be different with Aquino. But here we are again,” she said, “asking for the same things.”

In commemorating the National Health Workers’ Day last May 7, health workers held a protest caravan from the Lung Center of the Philippines, early morning, stopped for a brief program in front of the University of Sto.Tomas in España, then proceeded by midday to their main program at the Mendiola Bridge near Malacañang. The health workers are demanding a salary increase of P6,000 ($139.75) per month. The Alliance of Health Workers (AHW) said they conducted the Health Workers Day protest also to “continue the fight for jobs, rights and health of the people.”

“If President Benigno “Noynoy” Aquino III had really wanted to substantially increase the government employees’ wages, why doesn’t he just give the wage hike in its entirety under the Salary Standardization 3 (SSL-3)?” asked Jossel Ebesate, nurse at the Philippine General Hospital and new national president of the Alliance of Health Workers (AHW).

Wages and salaries of public and private sector workers including health workers are below the minimum cost of living at the National Capital Region set at P957 ($22.29) per day, or P30,000 ($699) per month, based on data by National Wage and Productivity Commission in June 2010. But as the labor NGO EILER has noted, pump prices have increased 14 times since that time, in the process, pulling up the prices of other basic goods.

“While oil companies get away with overpricing, President Aquino avoids approving any nationally-legislated wage or salary increase by delegating to the regional tripartite wage board and by ordering early release of old benefits and previously-approved salary adjustment,” said the AHW in a statement.

The tininess of Aquino’s wage gesture for the public sector is dwarfed further by the fact that in Philippine towns and cities classified from 4th to 6th, for example, the health workers are reportedly one year late in receiving the wage increases mandated in SSL-3, or they have been getting only a fraction of the mandated wage rates because their local governments have inadequate budget. Protesters from PAMS, a Securities and Exchange (SEC)-registered NGO with 42 chapters and more than 6,000 member-doctors nationwide, told Bulatlat.com that the Department of Budget and Management (DBM) has actually blessed with a circular the local government’s non-funding or inadequate funding for the wages of its health workers.

“That is counterproductive,” said Dr. Fresco Yapendon, president of PAMS. He said it doesn’t make sense to prod doctors and nurses to go to underserved, poor municipalities, only to approve their underpayment once they are there. Yapendon reiterated too the years-long complaint of health workers’ organizations that “many municipalities do not implement the Magna Carta of Public Health Workers by not allocating funds for it.”