You Are Here: Home → 2011 → May → 13 → Removal of Sandiganbayan justices in Garcia plea bargain pushed

“It sends the message that it is okay to steal the people’s money for as long as you admit your crime when caught and just return a small amount from what you stole.” – Pagbabago

MANILA – The immoral and unpatriotic act of the Sandiganbayan justices must be condemned.

This was the reaction of Pagbabago! People’s Movement for Change spokesman Fr. Joe Dizon, to the approval by the Sandiganbayan of the plea bargain agreement with retired AFP comptroller Major General Carlos Garcia last Monday, May 9.

The Sandiganbayan Second Division approved Garcia’s plea bargain, saying that the evidence against him was weak. And that Garcia had “complied with its conditions –pleading guilty to lesser offenses of direct bribery and facilitating money laundering, and transferring P135.433 million ($3.14 million) of his and his family’s assets to the state.”

It will be remembered that Garcia and former Ombudsman Ma. Merceditas Navarro-Gutierrez struck a plea bargain agreement wherein the government commits to withdraw plunder charges in exchange for a guilty plea for the lesser offense of direct bribery. Because of the deal submitted to the Sandiganbayan for approval, Garcia was allowed to walk out of his Camp Crame detention cell after posting a bail of P60,000 ($1,395) on December 18 last year, two days after he pleaded guilty to direct bribery during his re-arraignment for that lesser offense.

Lawmakers actively involved in the congressional investigations into Garcia’s case are also vehement in their protest against the Sandigabayan decision. They said that the Sandiganbayan violated its Constitutional mandate.

“The Constitution mandated the Sandiganbayan to give life to the fundamental principle that public office is a public trust, through the prosecution of civil and criminal cases involving graft and corrupt practices and other offenses committed by public officers. Sandiganbayan Second Division unanimously, but suspiciously and hastily, approved the plea bargain agreement. It previously denied Garcia’s petition for bail on the charge of plunder, thereby declaring that the evidence of guilt was strong. In a turn-around, however, it justified its latest decision to approve the plea bargain by declaring that the prosecution’s evidence was weak. This decision is prejudicial to the interest of the Filipino people,” Bayan Muna Rep. Teddy Casino said. 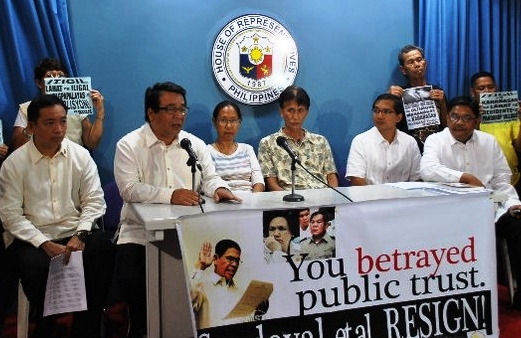 “The Sandiganbayan justices have betrayed their mandate to give life and meaning to the constitutional precept that a public office is a public trust and to impress upon public officers and employees that they are at all times accountable to the people with their duty to serve with the highest degree of responsibility, integrity, loyalty and efficiency,” the lawmakers said.

They filed House Resolution 1237 denouncing the Sandiganbayan’s decision. In it, they said that Sandiganbayan betrayed its constitutional mandate and the public’s trust the same way former ombudsman Merceditas Gutierrez did. “The Sandiganbayan justices cannot play deaf and blind to the fact that Ombudsman Navarro-Gutierrez was impeached by congress for betraying the public trust by her gross, inexcusable, in fact deliberate inaction and whitewashing of big-time cases involving former president Gloria Macapagal-Arroyo and her ranking civilian and military officials, including entering into disadvantageous plea bargain agreements,” they said.

Casino said that “by suspiciously and hastily” approving this plea bargain agreement, the Sandiganbayan “deliberately refused to recognize not only the Ombudsman’s impeachment but also how the both the senate and lower house conducted separate public hearings which unearthed irregularities in the plea bargaining agreement the Office of the Special Prosecutor and the Ombudsman entered into.

Casino said that the Sandiganbayan also committed a sin of commission when it unjustifiably denied the motions filed by the Office of the Solicitor General (OSG) seeking to intervene in the case so that it could ask for the recall of the plea bargain. “It also did so when it called for Presiding Justice Edilberto Sandoval to inhibit from the case, as it practically prevented a serious intervener from interceding on behalf of the offended party, namely the Armed Forces the Philippines and the state as a whole,” he said.

The lawmakers said that the Sandiganbayan’s decision to approve the plea bargain agreement offends the most basic principles of justice, fairness, and decency by virtually condoning the numerous acts of plunder committed by Garcia.

“It grossly undermines any genuine effort to combat graft and corruption in public service; It encourages big time corruption and plunder and further institutionalizes impunity, sending the signal to unscrupulous government officials to steal big so that they can enter a similar agreement and get away with plunder,” they said.