You Are Here: Home → 2011 → May → 13 → No salary hike under Malacañang’s Executive Order 40, government employees insist

In a rally in front of the House of Representatives, government employees led by the Confederation for Unity, Recognition and Advancement of Government Employees (COURAGE) denounced Malacañang’s inaction on their demands for a salary increase. They said that Malacañang fooled no one with its announcement last May 1 International Labor Day that public sector employees will receive a salary hike effective June 1.

Courage president Ferdinand Gaite slammed Malacañang’s continued declarations that it has done good for government employees by releasing Executive Order 40 on Labor Day. As per EO 40, Aquino ordered the implementation of the third tranche of the monthly salary schedule for civilian personnel of the national government to be implemented effective 1 June 2011 instead of July.

Courage is pushing for the passage of House Bill 3746 sponsored by Anakpawis Representative Rafael Mariano which lays down a P6,000 salary hike for public sector employees. It is also in full support of HB 375, a counterpart measure for private sector workers granting them a P125 across-the-board wage.

Gaite said that their call for a P 6,000 (US$140) increase to the minimum pay of all government employees and a P 125 (US$2.9) across-the-board wage hike for workers in the private sector has been proven legitimate and necessary. 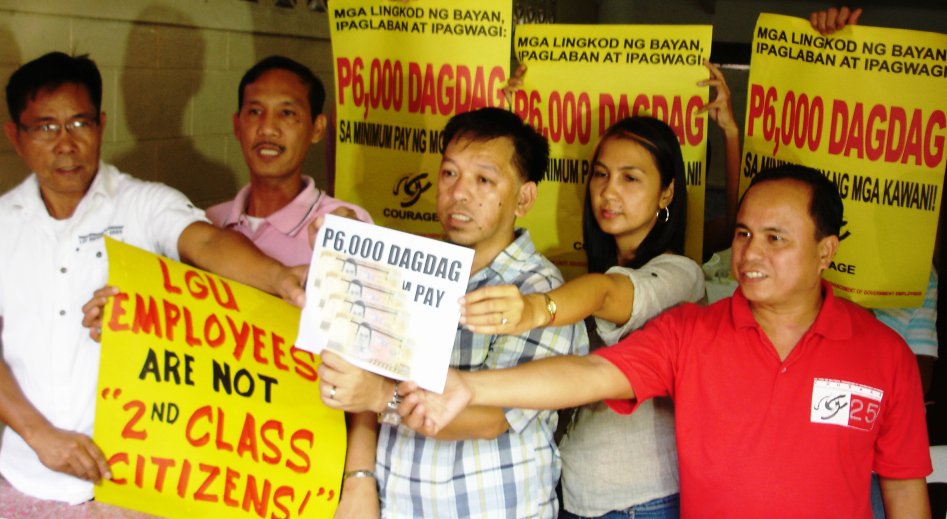 Members of the League of Local Government Employees (LEAGUE) hold placards calling for a wage hike, in light of the supposed “unjust and divisive” nature of the SSL 3. They are demanding for a P 6, 000 increase to the minimum pay of all government employees. (Photo by Ina Alleco R. Silverio / bulatlat.com)

“It’s highly insulting that Malacañang tries to pacify us with palliatives and band-aid solutions—EO 40 for state workers and a paltry P22 (US$0.51) ECOLA for private sector laborers. We are fed up with the Aquino administration’s deception: we demand a substantial wage increase!,” he said.

“Aquino’s EO 40 is tantamount to a zero wage increase: it merely advanced the implementation of the third tranche of SSL3. LGUs with “insufficient” funds are exempted from implementing the said increase. As we have said time and time again, SSL 3 is insufficient to cover the needs of government employees amid the skyrocketing prices of basic commodities and services. Even with the full implementation of SSL 3 in 2012, the minimum pay will still only amount to P9,000/month, (US$ 209) a far cry from the government’s own estimated Family Living Wage (FLW) pegged at P 29, 640 (US$689.30) per month. The only ones benefitting from the early release of the third tranche of the SSL 3 are the top government officials who will get their enormous pay hikes a month earlier than scheduled,” Gaite said explained.

“President Benigno Aquino III has been in office for nine months now, and in all this time he has done nothing to improve the lot of the country’s 1.5 million government employees. We are sick and tired of hearing Malacañang’s excuses that it cannot afford to raise our salaries when the truth is ranking government officials continue enjoy exorbitant salaries and various benefits courtesy of the SSL 3” he added. 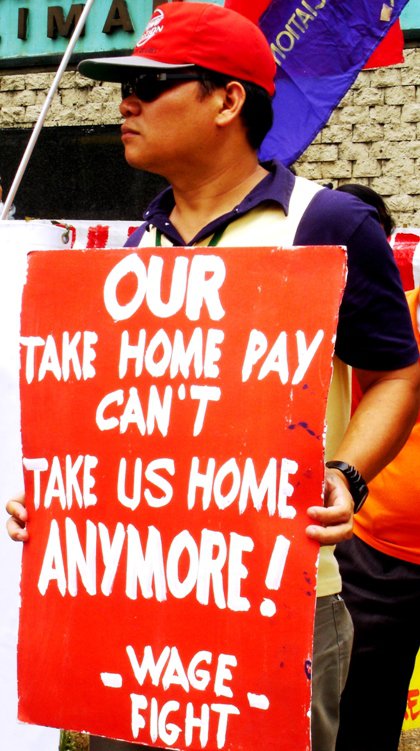 “LGU employees are treated like second-class citizens. Those from lower-class municipalities are constrained to accept meager increases, depending on the availability of funds or the fiscal viability of their mother units, not to mention the fact that the said increases are given in a span of four years,” he said.

He explained that after the full implementation of SSL 3, a Salary Grade 1 employee from a sixth class municipality will only receive a monthly salary of P 5, 512 (US$128), an amount that is far below the government’s estimated monthly cost of living pegged at P 28,710 (US$667.67).

“The SSL 3 does not comply with the need to provide equal pay for work of equal value,” he said.
It’s evident in EO 40 that the order is effective only for personnel in national government agencies (NGAs), government-owned and controlled corporations (GOCCs) and government finance institutions (GFIs).

Employees of local government units (LGUs) have to wait longer as the schedule will be determined by the LGU concerned based on the LGU income class and financial capability. The third tranche release for LGU employees will be charged against their respective local government funds.

The labor leader also took issue with Malacañang’s previous statement that the minimum wage for government employees is at P12,000 (US$279) rather than merely P 7,575 (US$176) because teachers and soldiers are receiving a base pay of roughly P12, 000. 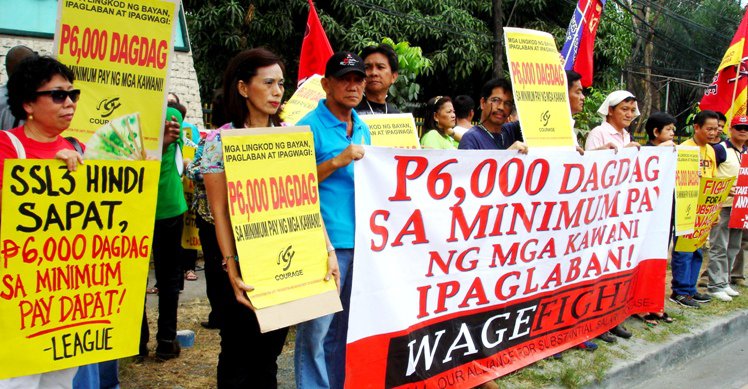 “Teachers and soldiers are not minimum wage-earners. In fact, more than 300,000 Salary Grade I Step I government employees currently receive monthly salaries amounting only to P7,575 gross pay. We refuse to believe that this was a simple miscalculation on the administration’s part. We think that the Palace is deliberately manipulating figures to undermine the legitimate demand of government employees for a substantial salary increase,” he said.

Gaite said that even policemen and teachers receiving a base pay amounting to P12, 000 are still in dire need of a substantial wage increase, since it is still a far cry from the government’s own estimated living wage. ?

Gaite said that President Aquino’s stubborn insistence on relying solely upon the implementation of the SSL3 as a means of economic relief for state workers stems from the fact that top government officials including himself stand to benefit greatly from the SSL 3.

“With the full implementation of SSL 3 in 2012, Noynoy is mandated to receive at least a P 12,530 (US$291.39) monthly increase to his already-substantial salary. On the other hand, 300,000 government minimum wage earners will still only receive a paltry P 9,000 monthly (US$209) salary. We now ask, are government employees supposed to rejoice over such news?,” he said.

Finally, Gaite said that the president’s declining public satisfaction ratings from +64 in November 2010 to +46 in March 2011 is indicative of the spreading public discontent due to his failure to fulfill his campaign promises of change, prosperity and good governance.