Docking of USS Carl Vinson, a violation of the country’s sovereignty

MANILA – Activists decried the docking of US warship in Manila Bay as a symbol of US aggression and disregard for the sovereignty of the country.

Members of various progressive groups under the banner of Bagong Alyansang Makabayan (Bayan) held a protest action near the US Embassy in Manila, May 17, against the four-day port call of the US aircraft carrier USS Carl Vinson. The US warship arrived May 15.

The USS Carl Vinson, the flagship of the Carrier Strike Group 1, is a nuclear-powered ship that carried and released the body of Osama bin Laden at sea last May 2. According to the US Embassy, the four day visit of the warship is a “routine port call and goodwill visit that highlights the strong historic, community and military connections between the US and the Philippines.” 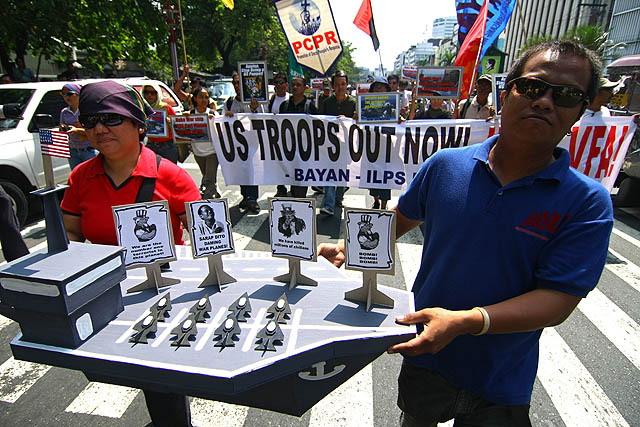 A miniature of the USS Carl Vinson. (Photo by Vincent Go / bulatlat.com)

But Bayan secretary general Renato M. Reyes Jr. said the USS Carl Vinson, now more renowned as the death ship of Osama bin Laden, has docked in the Philippine waters to further project US military might in the region. “Its presence in Philippine waters is a reminder of the unequal relations that has persisted between the Philippines and the US, long after the US bases were booted out.”

On May 15, President Benigno S. Aquino III, together with the senior members of his Cabinet, visited the US warship.

Nardy Sabino, secretary general of Promotion of Church People’s Response (PCPR) condemned the explicit disrespect of the country’s sovereignty. Sabino pointed out that nuclear-powered US carrier violates the Filipino people’s dignity as a nation.

“Article 2 Section 8 of the Constitution, states that the Philippines, consistent with the national interest, adopts and pursues a policy of freedom from nuclear weapons in its territory. This is a clear manifestation of US government’s blatant disregard for our national integrity,” Sabino said. He added that it brought the country in a bad light in the midst of the strong call against US wars of aggression. 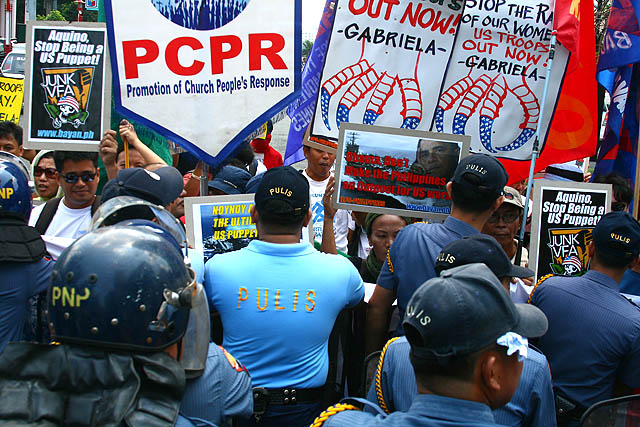 The groups were barred by the police at nearing the US Embasy in Manila. They held the program at Kalaw, Roxas Blvd. near the US Embassy instead. (Photo by Vincent Go / bulatlat.com)

Reyes said there is supposedly an ongoing review of the RP-US Visiting Forces Agreement being undertaken by Malacañang because of problems related to sovereignty. But, Reyes added, the visit made by Aquino and senior members of his Cabinet made it appear that there is no problem at all. “The message we’re getting here is that US troops and their war machines are very much welcome in our country despite numerous violations of sovereignty done in the past.”

Bayan challenged the Aquino government to reveal the findings of the review it conducted on the VFA.

“With US troops continuously and permanently present in our country, it is time Malacañang release the results of the VFA review. The issue of the VFA must be resolved. It is high time this agreement is terminated, as proposed by various groups, lawyers and lawmakers,” Reyes said.

Meanwhile, Rita Baua of International League of People’s Struggle (ILPS)-Philippines noted that Aquino was the only Philippine President that stepped in a US warship like the USS Carl Vinson. “Clearly, this administration is another puppet of the US.” 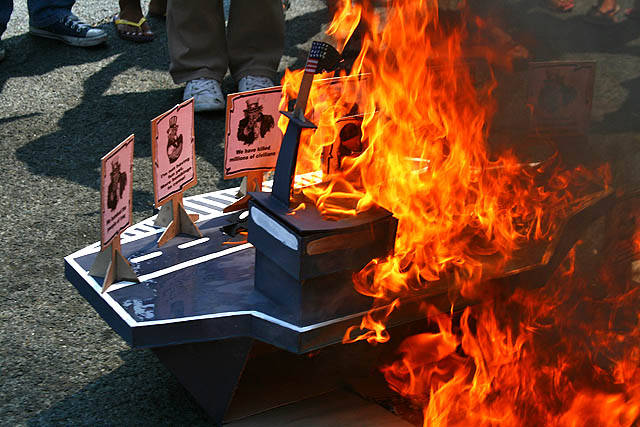 In a statement, Anakpawis Rep. Rafael Mariano, articulated the same view, saying that the docking of USS Carl Vinson and other US warships in Manila “smacks of the Aquino government’s subservience to U.S. dominance and war-mongering.” “It highlights the strengthened ties – the master and lackey relationship between the U.S. and Philippine governments. It’s an affront to our national sovereignty and independence.”

“Like a true ‘yes-man,’ President Benigno Aquino III and some of his cabinet officials, ‘gamely’ toured the USS Carl Vinson, a sign of assurance that his administration will continue to welcome U.S. troops and military intervention in the Philippines,” Mariano added.

Sabino challenged the Aquino administration to stand for national sovereignty and people’s welfare. The groups called on the US government to respect the Filipino people’s will and demanded for the immediate pull out of all US military warships and forces in Philippine territory.

Sailors of the USS Carl Vinson and personnel from the Philippine Navy conducted civil military operations (CMO) at the Ana Health Center in Dagat-Dagatan, Caloocan City, May 17.

Bayan deemed that the CMO is merely a publicity activity to gain support for the presence of US troops in the country. The CMO is also a key aspect of the new Philippine counter-insurgency program called Oplan Bayanihan, the group said.