You Are Here: Home → 2011 → May → 19 → Government too slow in releasing political prisoners – NDFP consultant

MANILA – Echoing the oft-repeated excuse of the Aquino government when pressed for the release of political prisoners, Ednar Dayanghirang, chair of the GPH-Reciprocal Working Committee for socio-economic reforms (RWC- SER), replied “it’s up the courts,” in response to the question raised by Girlie Padilla, secretary general of the Ecumenical Movement for Justice and Peace (EMJP) during the second national assembly of the Pilgrims for Peace, May 14.

According to Samahan ng Ex-Detainees Laban sa Detensyon at Aresto (Selda), there are more than 340 political prisoners in 67 detention centers nationwide, including 14 NDFP consultants and members.

Dayanghirang added that while the GPH has not yet released political prisoners, it is complying with the Jasig. “I don’t think we are not complying with it [Jasig] otherwise they [NDFP] would be complaining.”

Signed in February 1995, Jasig guarantees the safety and immunity of negotiators, consultants and all personnel who participate in the peace negotiations. 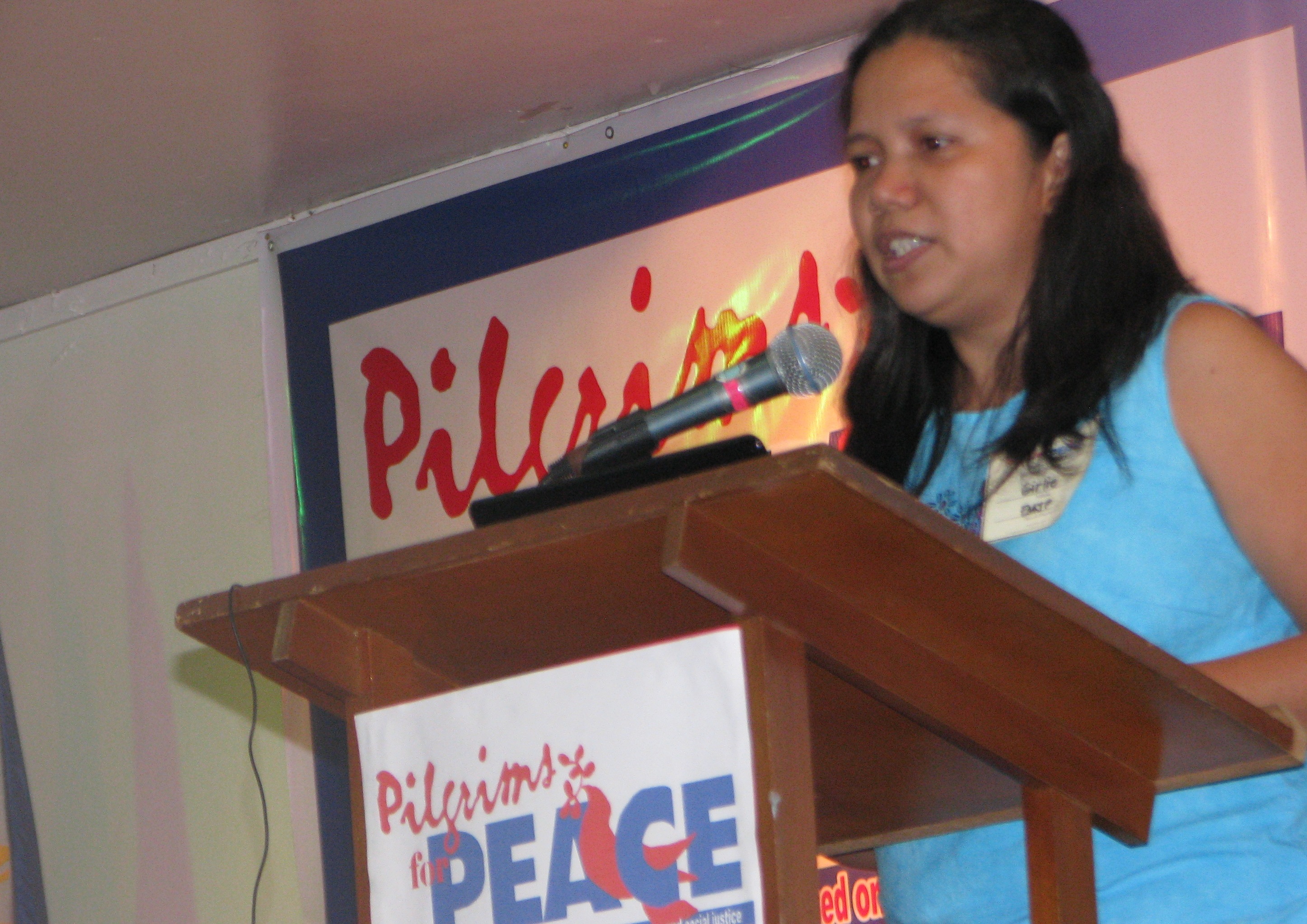 Baylosis recalled that during the resumption of peace talks in Oslo, the GPH committed to facilitate the release of many, if not all, detained Jasig-holders, including Alan Jazmines.

Jazmines was arrested in Baliuag, Bulacan on the eve of the resumption of peace talks on Feb. 14 by state agents. The police later informed him that he is being detained for 15 counts of murder that allegedly took place 19 years ago in Calauag, Quezon.

Earlier, Luis Jalandoni, chairman of the NDFP peace panel, said that Jazmines has been an NDFP consultant to the peace talks since the time of the Ramos government and is thus covered by Jasig.

Baylosis said the NDFP has recently designated Jazmines as a member of the NDFP RWC-SER.

“Your courts are too slow,” Baylosis said. “There are 14 NDFP consultants still languishing in jails. Angie [Ipong] was released because all the charges against her have been dismissed. Jovencio Balweg should have also been freed if not for new charges filed against him,” he added.

“What I know is that if a person is a Jasig-holder, there would be no problem,” Dayanghirang replied. “There is a system of verifying who are Jasig holders.”

Names, including assumed names of holders of documents of identification (DI), are contained in a depository box. “Most are aliases but they have pictures there,” Dayanghirang said. “If NDFP says that Jazmines is Jasig-protected, the government panel will verify it. If found true, the government will respect it.”

Documents of identification are issued to the negotiators, consultants, staffers, security and other personnel of both panels. Such documents, Jasig states, shall be duly recognized as safe-conduct passes.All persons with documents of identification or safe-conduct passes are guaranteed free and unhindered passage in all areas in the Philippines, and in traveling to and from the Philippines in connection with the performance of their duties in the negotiations, the Jasig states further.

Jazmines is a holder of a document of identification under the Jasig with assumed name Dodi Lapida, number 978213. Another political prisoner, Tirso “Ka Bart” Alcantara who was arrested on Jan. 4 is also a consultant of the NDFP and is also covered by Jasig, the Communist Party of the Philippines insisted.

EMJP’s Padilla also asked about the status of the warrants of arrest issued against Baylosis and two other NDFP peace panel members Vicente Ladlad and Randall Echanis. The three are among the 50 activists charged with 15 counts of multiple murder for allegedly ordering the purging of suspected government spies within the ranks of the CPP in 1985. The case is based on the allegation that a mass grave containing the remains of victims of an alleged CPP purge was discovered in Inopacan, Leyte. Also a co-accused in the case is Jose Maria Sison, chief political consultant of the NDFP peace panel and Jalandoni himself.

Dayanghirang replied that the charges are up to the courts.

Padilla said if the GPH continues to incarcerate members of the NDFP peace panel, it would one day find itself with no one to negotiate with.

“That is true, Ednar. Do you mean that after this first round of talks, we would go back to hide-and-seek?” Baylosis asked. The effectivity of the warrants of arrest issued against Baylosis et.al has been suspended indefinitely in the light of the peace talks. “Our liberty is temporary,” Baylosis said.

Meanwhile, Sister Miriam Francisco, a Benedictine nun working with indigenous peoples in Mindanao, told Dayanghirang of the case of a ten-year-old boy branded by soldiers as a child combatant.

“That is too much,” Francisco said. “What is your assurance that we who go to rural communities would not just be shot at by soldiers? We want to establish peace zones but what if we would be fired at?” the Benedictine nun, a convenor of Inpeace Mindanao, asked Dayanghirang.

The GPH representative said there is the mechanism of Comprehensive Agreement on Respect for Human Rights and International Humanitarian Law (CARHRIHL). “Human rights violations may be reported to the Joint Monitoring Committee for CARHRIHL,” Dayanghirang said.

Baylosis said that despite the numerous complaints against the GPH filed before the JMC, not one perpetrator has been investigated and punished. “Human rights violations continue under the new administration. The new counterinsurgency plan Oplan Bayanihan seems to be the same dog,” Baylosis said, referring to Arroyo’s Oplan Bantay Laya.

Dayanghirang defended Oplan Bayanihan. “President Aquino emphasized the primacy of the peace process. All else are subordinate to the peace process.” The GPH representative called on members of people’s organizations to continue the filing cases of human rights violations.

“Only the language has been replaced. To prove that the repression continues, I invite Ednar to areas subjected to heavy military operations,” Baylosis told Dayanghirang. Baylosis also noted that the three-year timeframe for the peace talks coincides with the Oplan Bayanihan’s goal of crushing the armed revolution in three years.