The National Democratic Front of the Philippines refers to the negotiations for a Comprehensive Agreement of Social and Economic Reforms as “the meat” of the peace talks as it aims to address the root causes of the armed conflict.

MANILA – Why should peasants, workers, indigenous peoples, migrants, women, and other marginalized sectors care about the ongoing peace talks?

The second national assembly of Pilgrims for Peace on May 14 provided the answers as leaders of various people’s organizations presented their situation and their proposals for socio-economic reforms to representatives of the Government of the Philippines (GPH) and the National Democratic Front of the Philippines (NDFP).

More than 200 delegates from all over the country issued challenges to Ednar Dayanghirang, GPH chairman of the Reciprocal Working Committee on Socio-Economic Reforms (RWC SER) and Rafael Baylosis, NDFP member of the RWC SER.

Renato Reyes Jr., secretary general of Bagong Alyansang Makabayan (Bayan) stressed the urgency of finding solutions to the economic crisis. Reyes stressed that the current crisis has further exposed the basic and fundamental defects of the Philippine economy. “Both panels should draw lessons from this, primarily on the need to create foundations for the development of the domestic economy.”

Next on the agenda of the peace talks is the forging of the Comprehensive Agreement on Socio-Economic Reforms (Caser). It is the second item in the four substantive agenda laid down in The Hague Joint Declaration of 1992. The Comprehensive Agreement on Respect for Human Rights and International Humanitarian Law (CARHRIHL), signed by both parties in 1998, was the first item in the agenda and became the first agreement forged during the peace negotiations.

The National Democratic Front of the Philippines refers to the negotiations for a Comprehensive Agreement of Social and Economic Reforms as “the meat” of the peace talks as it aims to address the root causes of the armed conflict. 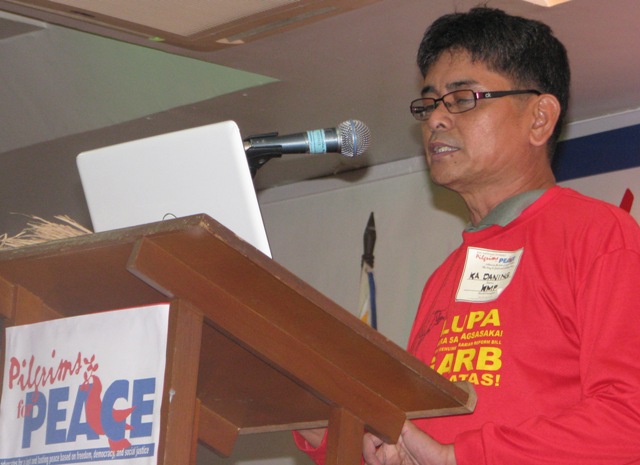 “Take the case of Hacienda Luisita. I hope this gets to the President,” Ramos said in Filipino, “Farm workers have long been calling for the junking of the SDO [stock distribution option] and distribution of land to the tillers.”

Hacienda Luisita is owned by the family of President Benigno S. Aquino III. During the administration of Corazon Aquino, instead of distributing the land to the farm workers, the SDO was implemented in the sugar estate.

“The government should solve the problem of the majority of our people,” Ramos said. The peasant leader called for a moratorium on land- and crop-use conversion.

Sammy Malunes, vice president for federation affairs of Kilusang Mayo Uno (KMU) called for the implementation of decent living wage and job security for workers. Government employees under the banner of Courage demand for P6,000 salary increase for rank-and-file employees and for control of prices of oil and other basic commodities.

For its part, Migrante International presented a five-point proposal for both panels. First is to stop forced migration by generating jobs at home. Second is to investigate, prosecute and punish corrupt and negligent government officials. Garry Martinez, Migrante International chairman, specifically pointed to Gloria Macapagal-Arroyo “for corruption of funds of overseas Filipino workers.”

Migrante also called for the protection of OFWs from unfair labor practices, discrimination, stringent immigration policies and other occupational hazards and the provision of assistance to OFWs in distress especially those in death row. The group also urged the scrapping of “anti-migrant laws.”

The group also proposed a moratorium on new coal power plants and a ban on the use of plastic packaging in fast food chains. Kalikasan PNE also urged the GPH to provide compensation for victims of tragedies such as the Marcopper mine spill, toxic waste contamination, etc.

For its part, Giovanni Tapang, chairman of scientist group Agham (not the party list group), said programs should be in place to mobilize local scientists, engineers and inventors. “Incentives should be provided to reverse the brain drain,” Tapang said. Tapang also proposed the protection of Filipino research and development outputs.

Bai Ali Indayla, spokeswoman of Kawagib, said the Bangsamoro people want their right to self-determination and their right to their ancestral domain.

Indayla added that most of the Moros are taliawid (farmers) and that thus, they also want genuine agrarian reform. “Review the history of land grabbing [of Moro land] and confiscate lands from transnational corporations,” Indayla said. Indayla also mentioned that there should be laws against discrimination of Moro in employment and for the protection of Moro migrants.

Sean Vilchez, deputy secretary-general of Health Alliance for Democracy (HEAD), presented the four-point health agenda. “Our public health system is in a state of comatose,” Vilchez said, saying that there should be free, comprehensive and progressive health services for all.

Vilchez also said there is a need to promote and uphold the interests of health professionals and health workers, implement progressive health policies and programs and ensure the people’s overall well-being and address the social determinants of health.

Meanwhile, France Castro, secretary general of Alliance of Concerned Teachers (ACT), called for the highest budgetary allocation for education and for the advancement of the interest and welfare of teachers and education personnel.