You Are Here: Home → 2011 → May → 20 → Relocated to Montalban, former residents of Laperal compound in Makati face an uncertain future

“We are not garbage, and we don’t want to be reduced to a life of begging. What we want is to have our homes, our lives and our dignity restored.”

MANILA — Two months after the fire that hit the sprawling Laperal Compound in Guadalupe Viejo, Makati , the former residents are left in a state of helplessness and hopelessness. It has been almost a month since the violent demolitions that finally forced the residents to leave their former community, and now they are forced to contemplate an uncertain future even as they struggle to survive from one day to the next.

In the first week after the April 28 demolition led by the Makati City government under Mayor Jejomar “Junjun” Binay Jr., residents put up makeshift shelters along EDSA Avenue right along the walls that surrounded Laperal Compound. The elderly and children alike slept on flattened cardboard boxes and tarpaulin sheets that used to announce special texting offers from the cellphone service companies. They forced themselves to ignore the loud and often deafening sounds of heavy traffic and the heat that rose from the pavement from midmorning to late afternoon. 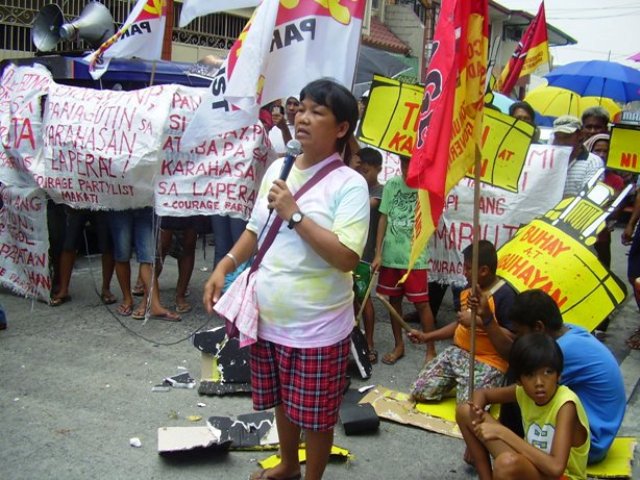 Damayang Mahihirap sa Laperal vice president Elena Ordonez addresses Mayor Junjun Binay: “We were poor, yes, but we did not live on anyone’s sufferance in Laperal and we were certain that there would be food on the table for the next meal. We are being slowly killed in Montalban,” she said. (Photo by Ina Alleco R. Silverio / bulatlat.com)

A month later, almost all but 24 families of the 500 families from Laperal Compound have been transferred to a relocation site in Montalban Rizal. This was through the efforts of Local Government Secretary Jesse Robredo.
Mrs. Elena Ordonez, the vice president of the community association Damayang Mahihirap sa Laperal said that most of the relocated residents are at a loss as to how to restart their lives. “We lost all our furniture, our clothes, most of what we saved through the years in the fire. Then the demolition operations took away what was left of our hope to rebuild our lives,” she said.

Ordonez and her family lived in Laperal Compound for 18 years, and the entire time they lived there they did not consider themselves as “squatters.” “The owner of the compound, Mr. Oliver Laperal, never told us to leave; in fact he even told us that as long as he lived and breathed, we could all stay on his land. All of us in the compound were grateful to him. It was the Makati City government that drove us away like animals,” she said.

Ordonez waxed angry recollecting all the statements Makati Mayor Binay gave the media about the residents in the compound. Binay and DILG secretary Robredo figured in a word-war after the latter chided the former that he should have exhausted all peaceful measures to convince the residents to leave the compound instead of ordering police and the demolition team members to attack the residents to prevent them from returning.

Binay in news reports was quoted as saying that what he did was an “exercise in political will.” He made the charge that it was the residents who were violent in their resistance, and that there were syndicates inside the compound.

The entire time, Robredo insisted that Binay should have resorted to peaceful means, including dialogues with the residents. “It would have been better for everyone if a dialogue was initiated. Nothing would’ve been lost if people were first informed,” he said in reports. 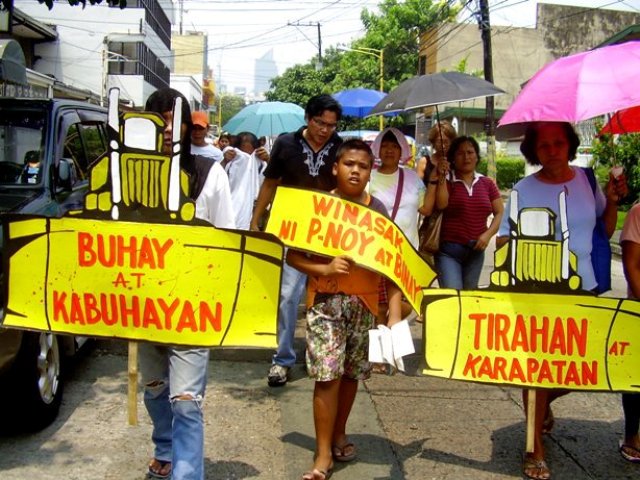 Former residents of destroyed Laperal Compound community in Makati continue to call on the Makati City government to provide them with economic assistance and give justice to the victims of those hurt
during the April 28 demolitions. (Photo by Ina Alleco R. Silverio / bulatlat.com)

Binay retorted that dialogues have limitations. He said that the Makati government could not allow residents to attack the city government’s teams while holding the dialogues.

During Binay’s demolition operation, two residents Natnat Maglente and Ramil Sagun where shot at and a child was reportedly killed. The demolition teams also used teargas against the residents.

“We are sickened and disgusted by Binay. In May 2010 he wooed all of us in Laperal to support his bid for the mayoralty. He made us promises so we would support him and told us that he was a friend to us. Our organization campaigned for him, we helped him win. Now where are all his promises? What happened to his declaration that he was our ‘friend’?” , Ordonez said.

Only defending their homes

William Balderas, the president of the local chapter of COURAGE Partylist in Laperal condemned the violence of the demolitions. He recounted what the experience was like, saying it was a nightmare especially for the children and the women.

“What were we supposed to do — stand there while they destroyed our houses? While they took away everything we worked for all these years? We had no choice but to defend our houses, never mind that most of them had already been damaged because of the fire. We were defending our community, we were fighting for our right to live there,” he said.

Balderas also said that in the immediate aftermath of the violence and three weeks later, Mayor Binay has said and done nothing to help the displaced residents. Binay, he said, appears indifferent to the damage he did to the lives of the residents.

“We were teargassed; many of us were beaten up by his hired hands. Many of our young men were arrested by the police, but not before they were punched and pummeled by the goons. The bulldozers destroyed our houses, the firetrucks that were there blasted us with water; after all these, we’re the ones being accused of being violent? We were only defending ourselves and our homes; they attacked us, they used violence against us,” he said.