You Are Here: Home → 2011 → May → 20 → Relocated to Montalban, former residents of Laperal compound in Makati face an uncertain future → Page 2

Life in Montalban is no life

Now living in Montalban, Ordonez said that most of the residents did not know how to pick up their lives. Simple houses had been provided them by the DILG which they will only have to pay for after a year and only with P200 as rent; but there is nothing else for them there. The Makati government has not lifted a finger to help its constituents.

“We cannot eat houses,” Balderas said. “Most of us made a living as vendors, security guards, drivers and we made our living in Makati, Manila and Quezon City. In Montalban we have no jobs, we have no money. Those of us who managed to save money go back and forth from their place to work to Montalban, but the fare costs too much,” she explained.

According to Balderas, life in Montalban is more than difficult, it’s almost impossible.

“There’s no school here for our children. There’s no nearby hospital either. It’s impossible to make a living from selling things because people have no money. Back in Laperal we were independent. We were poor, yes, but we did not live on anyone’s sufferance and we were certain that there would be food on the table for the next meal. We are being slowly killed in Montalban,” she said.

The former residents are not alone in their outrage against the demolition of their community and the manner in which it was done. The Partnership of Philippine Support Service Agencies (PHILSSA) released a statement denouncing the violence, saying that there was “absolutely no justification to hurt persons who had lost their houses to the fire and have yet to find a new place to call home.” 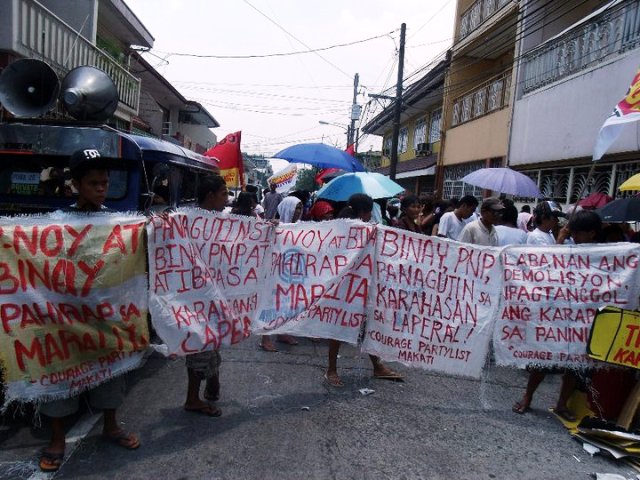 Former residents of destroyed Laperal Compound community in Makati continue to call on the Makati City government to provide them with economic assistance and give justice to the victims of those hurt
during the April 28 demolitions. (Photo by Ina Alleco R. Silverio/ bulatlat.com)

“We particularly object to Makati Mayor Jun Jun Binay’s unreasonable refusal to talk to affected people in the community to resolve the crisis, including agreeing to a peaceful and orderly transfer of people from Laperal compound. In the same breath, we laud DILG Secretary Robredo’s openness to dialogue with the community leaders, to listen to their needs and agree on the way ahead,” the group said.

The PHILSSA said that in dealing with its constituents, the government must show a preference for “Talk instead of Tear Gas, Dialogue – instead of Imposition.”

The Confederation for Unity, Recognition and Advancement of Government Employees (COURAGE) also expressed outrage over what was done to the former Laperal residents. It led a rally in front of the Manila City Hall last May 9 to demand an audience with Mayor Binay and to take him to task for neglecting his constituents. The group also charged President Benigno Aquino III for essentially allowing the use of violence in demolitions and for condoning said operations against the urban poor.

Courage president Ferdinand Gaite said that Malacañang’s silence on what happened in the Laperal demolitions was indicative of its support for the attacks against the residents.

“With every day that passes it becomes clearer and clearer that poor Filipinos cannot rely on the Aquino government to offer them succor. Where is this government’s compassion for the poor? For all of President Aquino’s statements that we are his boss, what we experience daily in violence in various forms at the hands of this government. We suffer low wages, unemployment, high prices and exorbitant rates for basic services including public transport. Seemingly not content, the government destroys our houses! Where is President’s Aquino’s ‘straight path to progress’?”

People’s welfare should be government priority

In a commentary on the Laperal demolitions, writer Gerald M. Nicolas sided with the residents and said that the demolition was against laws and legal standards protecting the urban poor and their right to housing..

“Unfortunately, no agency monitors compliance with these standards, and violations are committed without reprimand. Informal settlers are left at the mercy of local governments, many of which have devised ways to circumvent the law. For example, consultations can be complied with by simply producing an attendance list of a meeting not necessarily with the affected families. Adequate relocation is not immediately provided by some local governments because they believe it is the national government, particularly the National Housing Authority, which should give the homes. The term “danger area” has been loosely used to target communities which some LGUs want to bulldoze out of sight. In the case of Laperal, it was declared a “danger area” only after it was razed by fire,”he pointed out.

Nicolas went on to say protecting the welfare of the people is the primary role of government. This, he said, was not the case in Laperal where the local government itself wanted the community to be demolished immediately and refused to engage in any dialogue with the residents.

“Nothing in the law justifies the use of violence by affected residents in Laperal to insist on staying in the area. But surely, the majority would have wanted a peaceful resolution if only they were given the chance and the venue to dialogue with the local government,” he said.

Undeclared war against the urban poor

Youth organization Anakbayan in the meantime said that The Aquino government has launched an “undeclared war against the Filipino poor.”

“Aquino has no right to be surprised that the number of poor and hungry Filipinos continues to rise under his administration. Why should he when his government has been evicting them from their homes ?” said Anakbayan national chairperson Vencer Crisostomo.

Crisostomo said that violence was also being made against residents of two other urban poor communities which were put under attack recently: San Roque in Quezon City, and Pinaglabanan in San Juan City, last February. He also cited other government ‘offensives’ against the urban poor: suspected deliberate fires in San Roque; the assassination of Navotas anti-demolition activist leader Antonio Homo last March; the demolition of a community in Calamba, Laguna last April 27; the violent dispersal of a December 2010 rally by “kuliglig” (motorized pedicab) drivers in Manila; the impending demolition of the Dypac community in Tondo, Manila; and the impending eviction of vendors, pedicab drivers, and residents inside Intramuros in Manila.

Restore their lives and dignity

The former residents of Laperal continue to call on the Makati government and Mayor Binay to address their concerns in Montalban. They are, after all, still voters of Makati and most of them have been for the last two decades.

“Mayor Binay and even President Aquino have a responsibility to help us. Both of them sought the votes of the urban poor during the May 2010 elections, but now they’re ignoring us. Mayor Binay keeps saying that he wants Makati to be an example to other cities, but look at what he has done to us — is he serving a good example? Is his message to other local governments to demolish in the most violent ways possible the urban poor communities that are in their own areas of jurisdiction?” Ordonez said.

“We are not garbage, and we don’t want to be reduced to a life of begging. What we want is to have our homes, our lives and our dignity restored. Houses are not enough if we cannot have steady employment. We are willing to work with the government to secure this, but it has so far done nothing to help us.”